After years of being shut out of the conversation, environmental issues were front and centre at the first federal leaders' debate on Thursday, August 6. A full quarter of the face-off was dedicated to pipeline politics, energy issues and climate change. Here's how the leaders fared. 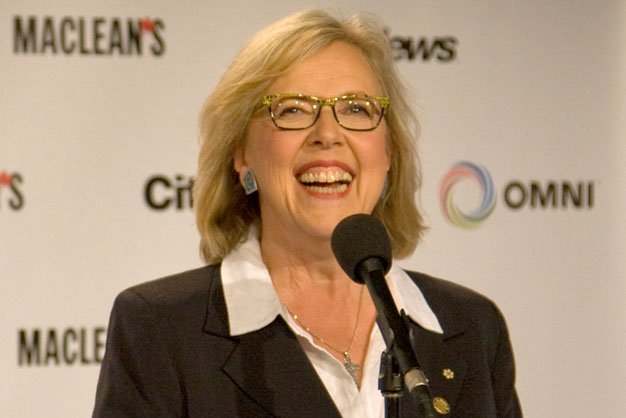 No surprise that the Green party leader spoke most forcefully for the planet, holding Harper’s feet to the fire over his “legacy of broken promises.” While Mulcair and Trudeau advocated beefing up enviro protection so we can keep piping out Canada’s “resources” with greater social approval, May was “the only one to directly challenge the oil sands growth strategy that underlies the pipeline issue,” says York U environmental studies prof Mark Winfield.

The Liberal leader was fairly strong, slipping in a couple of good jabs at the PM’s expense, like “Mr. Harper, nobody believes you on the environment.” But you don’t have to drill deep to discover Trudeau isn’t against pipelines or oil sands expansion. He’ll only go so far as to argue that Canada needs tougher environmental protections, though he did briefly acknowledge that we have to get past our oil sands addiction. He promised a continental approach to climate change and energy issues, which Harper’s dropped the ball on.

Mulcair disappointed on a few key green issues, like the proposed Energy East pipeline, which he said could be a “win-win-win.” Many expect more from the man who used to be Quebec’s environment minister, a job title he reminded the audience of several times. Mulcair did talk up the polluter-pays principle along with the fact that he added the right to a clean environment to Quebec’s Charter back in 06. But he’s also making a big deal of coming across as oil-sands-friendly. As Winfield says, “He may have been trying too hard to be a moderate, [and] in the process may have lost environmentally concerned voters, particularly among younger demographics, to the Greens and even the Liberals.”

PM BS’s HIS WAY THROUGH

Stephen Harper was on the defensive for much of the enviro segment, responding with wiggly fabrications when he was asked, for example, if he’s frustrated over the long-delayed Northern Gateway pipeline. He claimed the project “went through a rigorous environmental assessment.” Not so, according to 300 scientists and scholars who last year signed a letter challenging the Joint Review Panel’s assessment of the much-maligned pipeline. They argued that the panel ignored risks, relied on pipeline company data without question and contradicted scientific evidence from government documents.

After Trudeau accused Harper of screwing over the Canadian economy by failing to be smart and responsible about the environment, Harper pushed back: “We are the first government in history to reduce greenhouse gas emissions while also growing our economy.” But as May pointed out, the only thing that really slashed Canadian emissions was the global recession of 2008-09 – that and Ontario’s coal plant shutdown, which Harper tried to take credit for.

May earns points for calling out Harper’s failure to deliver on a 2009 G20 commitment to phase out subsidies to fossil fuel companies. The PM’s response? “The government has in fact eliminated subsidies to the oil sands and to the oil sector.” Is that so? Tell that to the IMF, which last spring reported that Canada still doles out $34 billion in fossil fuel subsidies in both direct support to producers and uncollected tax on externalized costs.

Mulcair won this one when he quipped, “Mr. Harper thought that by gutting our environmental laws somehow he could get our energy resources to market better. How’s that working out, Mr. Harper?” As Mulcair points out, “None of those projects has gotten off the drawing board, and it’s not hard to understand why.”

IT TAKES A MOVEMENT TO GREEN AN ELECTION

Greenpeace’s Keith Stewart says environmentalists usually spend elections lamenting the fact that climate change is being ignored, but this time around a powerful anti-pipeline movement forced green issues onto the agenda. (First Nations pipeline activist Melina Laboucan-Massimo was even featured in a debate clip.) The lingering problem? Party leaders are still mostly tossing around climate policies that prop up Canada’s dying fossil fuel economy. Says Stewart, “As the rest of the world moves on to clean energy, we risk being left trying to sell dirty oil into a world market that isn’t buying.” Enviros are hoping to shift the debate toward a 100 per cent renewable future.