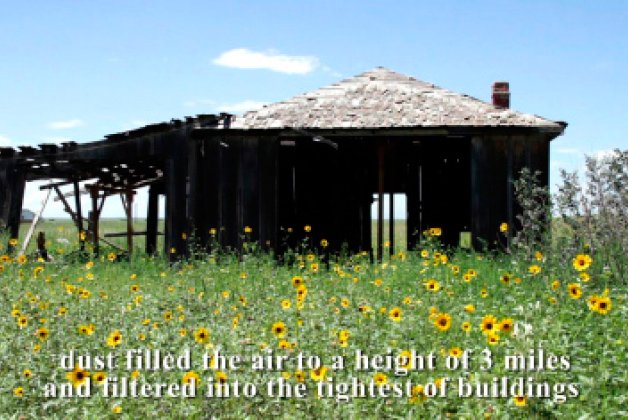 The words “natural disaster” bring to mind thoughts of devastating loss of shelter and lives, and our recent freezing days without power.

In What Was Will Be, Christina Battle, a Canadian based in Denver, and Kristie MacDonald, a local who also works as an archivist, take a historical approach to representing extreme weather events. Time provides a sense of distance from the destruction and the human trauma that must have accompanied it.

Battles’s video installation dearfield, colorado – an African-American town founded in 1910 and abandoned during the 1930s Dust Bowl era – is part of an ongoing project called Mapping The Prairies Through Disaster. It screens in a room clad with reflective metal sheeting, a reference to the power of dust storms to electrify metal, with a soundtrack of staticky “sferic” recordings, broadband impulses created by lightning strikes. Battle has photographed the decaying rural buildings under sunny skies, overlaying them with short quotes from survivors’ descriptions of the storms.

Behind the peaceful images lies a history of broken dreams: of farmers uprooted by the drought and dust, the result of agricultural practices that destroyed the ecology of the Great Plains and of black founders of towns like Dearfield who sought an escape from Southern racism in the North and West.

In Mechanisms For Correcting The Past, MacDonald takes vintage found photos of shacks and small dwellings cut loose from their foundations by floods and turns them on an angle so their rooflines are approximately horizontal.

Four tilted photographs hang on one wall, while on another a slide image emanates from a projector that a mechanism on a carefully constructed wooden table raises and lowers at an angle. The strategy is pathetically inadequate to mitigate the hopeless condition of the ruined structures.

These low-key, deceptively simple works carry an ominous message: since we’ve failed to learn from What Was, we’re doomed to endure similar disasters.