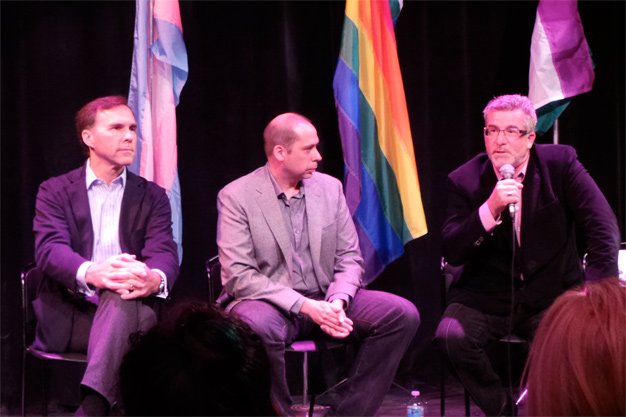 The Liberals' Bill Morneau, the Greens' Chris Tolley, and the NDP's Craig Scott at Thursday's Proud to Vote debate on LGBTQ issues. (Of the three white dudes, Scott is the only who's queer-identified.)

At Thursday night’s Proud to Vote debate, NDP, Liberal, and Green representatives pledged that their respective parties would repeal Bill C-36, the Conservatives’ anti-sex-work law, if they form government. The issue, which had barely been mentioned in this election, is apparently a matter of importance for all three of them.

The LGBTQ issues forum, held in the cabaret space at Buddies in Bad Times Theatre, invited each party to send a candidate of their choice, regardless of the riding in which they’re running. And so there was Craig Scott, the NDP incumbent in Toronto-Danforth, facing off against the Greens’ Chris Tolley from the same riding as well as Bill Morneau, the Liberal hopeful in Toronto Centre. The Conservatives opted not to send a delegate, which was both unsurprising and somewhat frustrating, given that as recently as last month the party was literally waving the LGBT banner. The CPC place on the stage was left empty, with moderator Brenda Cossman asking off the top that participants “not engage in a kind of Clint Eastwood debate with the chair.”

The Conservatives appear to have nevertheless noticed the event, with Jason Kenney suddenly invoking C-36 as a wedge issue the next day. The new law, written in response to the Supreme Court’s 2013 decision to strike down certain earlier statutes that endangered the lives of sex workers, flew in the face of the ruling by going even further to criminalize sex work and push those who practice it underground. NOW Magazine is part of a coalition opposing the law, which also criminalizes the placement of sex advertisements by third parties.

(My partner is the co-founder of one of the 10 groups that organized the debate.)

Here are candidates’ complete responses to the question of what to do about C-36, minus those parts of their answers that were drowned out by applause. Below that are a handful of other highlights from the debate, touching on a range of issues that directly or indirectly affect LGBTQ people.

Xtra’s Kevin O’Keefe: Recently, Bill C-36, which was ostensibly created to protect sex workers, passed through our last government. However, sex-worker advocacy groups have criticized the bill as unduly endangering the lives and livelihoods of sex workers. Will your party look at revising or repealing this bill?

Scott (NDP): We fought it very hard, just as we had C-51 and the “Unfair Elections Act,” and there’s no way — as Tom [Mulcair] said with respect to another subject two days ago — there’s not a snowball’s chance in hell that we would allow that legislation to stay on the books. It’s done. There’s a couple starting points, but one of them has to be, when the Supreme Court exercises moral leadership within a constitutional framework and sets out principles that everybody can use as a reference point for good-faith debate about what the best approach is and that it’s totally ignored, for purposes of nothing but playing to the base — throwing blue meat, if you like, out to the base — was one of the worst experiences of my three years since being elected. And it was my privilege to be part of the team, even though I’m on another committee, to be called in on occasion to lead some of the questioning on the bill that completely, completely does not understand the idea of sex workers’ rights. So absolutely you’ll see an NDP government making sure that we figure out what to do with the Supreme Court judgment that does not involve keeping this legislation.

Morneau (Liberal): Well, on this there’s no disagreement. We would want to get rid of this bill just as the NDP would, and think that — now, I know there’s no Conservative here — but think that this is a continuing approach that the Conservatives seem to be doing, which is dismissing our courts and dismissing the judgments of our Supreme Court on issues that really matter to Canadians. So this is completely unacceptable. It’s a bill that puts people in danger, and we would not stand for it.

Tolley (Green): Repeal it. We would repeal it. We feel that the most important thing is the legislation has to be there to protect the sex workers it’s not about protecting the public. We need to talk and formulate legislation with sex workers. Right now, we prefer the model that’s based on the New Zealand model — a very, very strong model. We would prefer something along those lines, where basically what you’re doing is you’re protecting the sex workers, not criminalizing it. At the same time, we need to also have structures in place so that if somebody does want to leave the business, they have the support and the ability to live any life that they want. At the end of the day, everybody has free choice, and we just need to make sure that everybody is protected and safe.

Moderator Cossman (a U of T law professor and director of the school’s Mark S. Bonham Centre for Sexual Diversity Studies): So on this question, I actually risk turning into Clint Eastwood and just saying “Shame on that chair. Shame.”

Best pandering with heart and sincerity

Tolley, in response to a question about support for queer theatre, arts and festivals: When I went to school, I started off doing a major in theatre and a minor in political science. And during that time, I looked at history, and I saw that throughout history, it wasn’t the businessmen, it wasn’t the bankers that overthrew governments, that started revolutions, it was the artists. So I think the most important thing is that we start to get the artists up here on this stage and involved. That is critical.

Scott, in response to a question about a guaranteed annual income: It’s not in our platform, at the moment. So a guaranteed minimum income, as a specific policy, is not. It is something that has been bouncing around in very serious ways in policy discussions for decades in the NDP, and it’s something that I honestly hope, that I personally hope, and I think everybody in my caucus would like to see a very good discussion. And I salute the Greens for putting it on the table.

Morneau, on supporting refugees: I know the Conservative’s not here, but it’s worth taking a moment on this issue to call out Stephen Harper. In the debate that he was in a week ago, he claimed that they did not cut back refugee healthcare, which is just a flat-out untruth. I was chairman of the board at St. Michael’s Hospital when that happened, and I can tell you that there were refugee claimants who actually were out of healthcare when that happened. And I was so proud of the doctors at St. Mike’s, because they decided to cover those people for healthcare, anyway, out of their own incomes. And I can just tell you, that’s the sort of thing that Canadians do when our government makes really, really awful decisions that are jeopardizing people.

Best plea for a necessary program

Tolley: We’ve been nurturing a pharmacare program for a very long time — very, very well costed out, it’s very robust, a lot of work’s gone into it, a very strong timetable. It’s been very, very important to us. And it was something that was resonating with the public. Then last week the NDP suddenly mentioned they have a pharmacare program. And at the end of the day, I don’t care if it’s the Green Party that brings it in or if it’s the NDP or the Liberals — who cares. We just need it. My concern is, the NDP’s program right now is very thin, there’s no timeline, and all I can say to you is: if, in the rare, odd chance that the Green Party doesn’t form a majority government, all I say is, please, I hope, and promise me this is not just to get votes. This is too important.

Morneau: Am I a feminist? Well, you know, it’s a good question, and I guess I have to think about how you define that. I mean, am I a strong supporter of women’s rights? Absolutely. Am I a feminist? That makes me a feminist, I guess.

Scott: We have to move to a proportional representation system.… We have to give our political system, for all of its problems, the chance to reflect the decency and the core values of Canadians, rather than a system that can be gamed so that one party can actually get in and get 100 per cent of the power (because of the structure of our Westminster parliament) with less than 40 per cent of the vote, and completely misrepresent the value orientation of the entire country as a result. And the only way we’re gonna move forward on everything we’ve been talking about tonight — and on something as serious as the issue of our times, climate change — we need to be able to constantly elect parliaments where we have a fighting chance for consensual, collegial, and spirited debate across political parties, where not one party can dominate in a way our current system allows.… Under our current system, we will constantly be in danger of future Stephen Harpers.