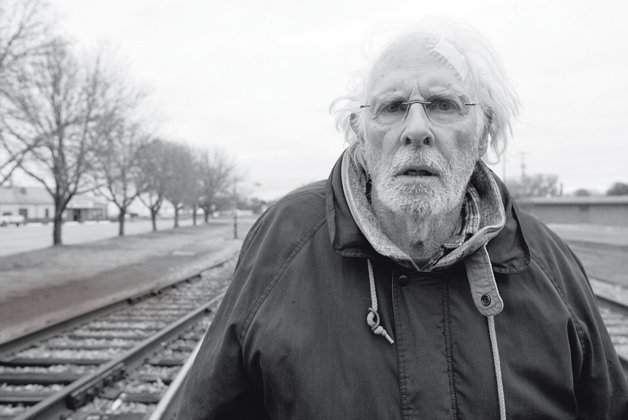 Bruce Dern holds one note for two hours in Nebraska.

After the complex emotional arcs of The Descendants, which followed George Clooney’s detached Hawaiian lawyer through a raging sea of confusion and grief, the muted smallness of Alexander Payne’s new drama, Nebraska, comes as a sort of shock.

A black-and-white road movie about a Montana speaker salesman who gets to know his remote, alcoholic father as the pair drive to Lincoln to cure the older man’s obsession with a sweepstakes, Nebraska lacks the emotional highs and lows that mark The Descendants and Payne’s best picture to date, Sideways.

With blank-eyed Bruce Dern shambling around as cranky, distressed Woodrow Grant and Will Forte forever trailing behind as his exasperated grown son David, Nebraska feels much more like Payne’s 2002 drama, About Schmidt: a slow walk through a series of modest incidents that inform our understanding of its central character.

Problem is, Nebraska won’t surprise you. Not even once. Every scene, every encounter, plays out exactly as you’d expect. Road movies are by definition formulaic, but the way Bob Nelson’s screenplay dribbles out details and shading feels more calculated than it should.

Worse, Dern’s performance is underwhelming. He’s very good, but he’s really just holding one note for two solid hours. In fairness, my disappointment might be the result of raised expectations because Dern was named best actor at this year’s Cannes Film Festival. He’s not bad, but he’s not doing anything a dozen other actors couldn’t have done in the role. One of them, Stacy Keach, even appears in the movie.

And Payne’s fondness for caricature grows grating. Nebraska strays into the same weird snobbery about the flyover states that bugged me in About Schmidt we’re encouraged to laugh at their empty lives and small dreams.

This isn’t to say that Nebraska is bad. It isn’t. But it’s awfully safe and contrived, which is not what I’ve come to expect from Payne. Be advised.