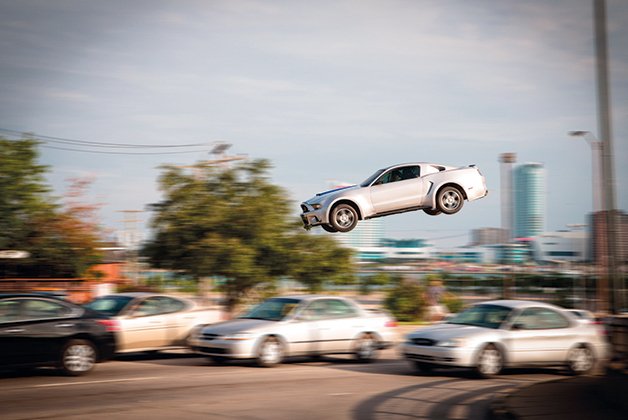 Dont try this yourself

Need For Speed dazzles with money shots of obscenely expensive cars as they tear down highways and kiss the sky. Showing his affinity for real stunt work, director Scott Waugh pulls back on the CGI and gets dangerously close to the twisted metal. Too bad the movie stalls whenever it gets out of the driver’s seat.

Breaking Bad’s Aaron Paul plays a wrongfully imprisoned ex-con pursuing vengeance as he leads police and bounty hunters on a coast-to-coast chase to a rarified race, where he will get retribution (apparently by winning).

Paul’s attempt to channel Steve McQueen is muffled in a movie in which plot and character are a hindrance. The story, which makes very little sense, sticks to the basic directions mapped out by the video game it’s based on: drive recklessly fast and furious and earn bonus points for every police cruiser that spins out in a blaze.