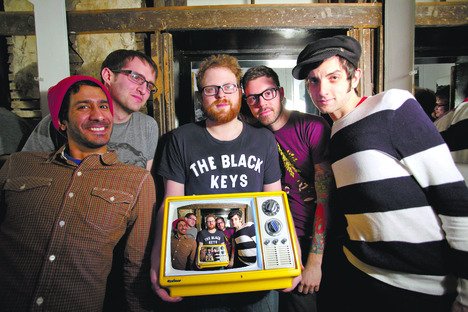 Neon Windbreaker have accidentally become one of the city’s busiest bands.

With their dance card already filled with gigs at Wavelength’s 11th Anniversary Festival, CMW and at least 10 SXSW shows, it’s easy to forget that they initially started as a joke.

“It was more of an experiment to see what we could get away with,” says lead singer Eric Warner, also a local concert booker and head of the We Are Busy Bodies record label. “It still is to some extent, but it’s evolved into something where our songs can legitimately stand on their own merits.”

Their origin story makes it hard to know how serious they are. The full lineup met for the first time onstage at their second show. It took until the third show, opening for guitar goddess Marnie Stern, for them to actually write any songs. With only 10 minutes of material and 25 minutes to fill, they played the same set twice.

“I had someone come up to me and say, ‘I really enjoyed your set,'” recalls Patrick McCormack (also of Les Fräuleins). “‘Okay,’ I said. ‘Which one?’ No one even noticed.”

With the lineup now solidified and some songs recorded, Neon Windbreaker are ready to call themselves a real band. On their debut EP, Sandwich + Fruit, the quintet’s popified take on hardcore covers a ton of stylistic ground in just over eight minutes.

“What’s interesting is that even though the music is intuitive and immediate, I get to approach it from a critical perspective,” says guitarist Jonathan Dekel, who’s also a seasoned music journalist. “But it’s mostly about having a good time onstage. It’s not like Crystal Castles, where we’re trying to be too cool for school.”

Still, an offbeat tone definitely remains from Neon Windbreaker’s “joke band” phase. For the release show, they’ve screened EP download codes onto fruit in edible candy ink and also printed them onto wax-paper-wrapped sandwiches. The result may be the first edible album.

“Let’s face it, we’re living in a disposable culture,” Warner deadpans. “Our music can be ingested whole and digested or spat out. We’re a consumable product.”