Many thought that resistance to Enbridge pipeline would dwindle after its approval, but Liberal promises to reform the National Energy Board has raised the tenacity of the opposition 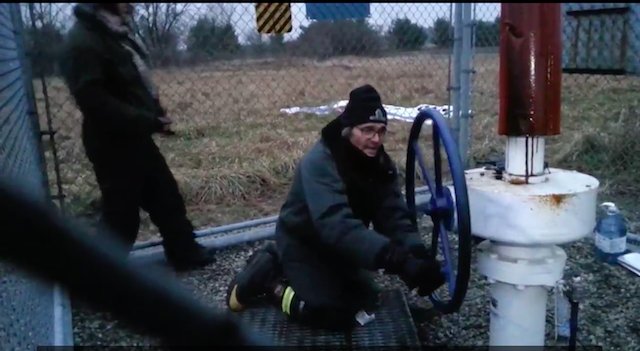 Still from video of December 7 action on Line 9 in the town of Ste-Justine-de-Newton on the Québec-Ontario border. submedia.tv

On December 7, activists carried out a bold action against Enbridge’s Line 9 pipeline on the border of Quebec and Ontario only four days after the oil had begun to flow. A spokesperson for Enbridge confirms that the pipeline was shutdown that morning from its control centre in Edmonton because of “safety concerns” raised by protestors.

But more threatening to Enbridge than the protest itself is the fact this direct action had the implied support of the local municipality, Sainte-Justine-de-Newton, whose former mayor Patricia Domingos acted as the spokesperson for the activists as they sat with their necks U-locked to the valve.

Many thought that the resistance to Line 9 would dwindle after National Energy Board (NEB) approval of Enbridge’s plan to reverse the flow of the 40-year-old line to carry tar sands crude to refineries in Montreal and on the east coast.

But besides the December 7 action, a 22-year-old University student is currently running the entire length of the pipeline to raise awareness of the legal challenge brought against the line by the Chippewas of the Thames, which is vowing to take its case all the way to the Supreme Court of Canada.

With the new federal government promising to “modernize and rebuild trust in the National Energy Board,” the tenacity of Line 9 resistance raises the prospect for activists of changes to the NEB being retroactively applied to the project.

Indeed, the Liberal review “will ensure that the Crown is fully executing its consultation, accommodation, and consent obligations on project reviews and assessments, in accordance with its constitutional and international human rights obligations.” These are the exact rights that the Chippewas of the Thames are asserting in their legal challenge.

“Forty years ago, Enbridge installed this pipeline without prior knowledge or consent,” says Rochelle Smith, of the lands and environment department of the Chippewas of the Thames. Smith insists, “we weren’t consulted… we felt that we were ignored. So now we are taking it to the Supreme Court. It is unfortunate that we have to do this to fight for our own rights.”

After losing a Federal Court of Appeal challenge in a split decision the Chippewas are emboldened by a letter of dissent issued by a federal court judge and the support of the Chiefs of Ontario.

At least seven municipalities in Ontario – including Toronto and Kingston – have passed resolutions requesting that environmental assessments be carried out by the province in absence of a federal EA.

The Municipality of Sainte-Justine-de-Newton in Quebec passed five resolutions related to the Enbridge project on everything from NEB transparency to emergency response plans, as well as demanding hydrostatic testing of the entire line. The municipality, which sent these resolutions to new Prime Minister Justin Trudeau, is still awaiting a response from the PM.

Interestingly, one of the complaints of activists who involved in the December 7 action was the amount of time that it took Enbridge to respond to the protest.

“It is unacceptable that Enbridge can go forward with the Line 9B flow reversal while communities along the route have not received the necessary contingency plans in the event of an emergency,” said Jean Léger, in a statement issued by the activists. “Considering the state of the pipeline, and the corrosive nature of bitumen, we know that a spill is inevitable and would impact the drinking water and farmland of millions of people in Ontario and Quebec.”

While the NEB ordered Enbridge to conduct hydrostatic tests on three segments of the pipeline, Les Citoyens au Courant, a citizens group based in Vaudreuil-Soulanges – another municipality along the line – pointed out that the NEB later granted a request by Enbridge to lower the pressure for these tests, thereby compromising the safety margins afforded by the assessment.

According to an anonymous statement written by one of the activists involved, the Line 9 action “was a test of Canada’s new anti-terrorism law C-51, which expands the definition of terrorism to include tampering with critical infrastructure.”

Indeed, actions against this pipeline are only getting bolder. It will be interesting to see how the government responds.