Richmond and Adelaide to test separated cycle tracks, Harbord-Hoskin lanes to get upgrades 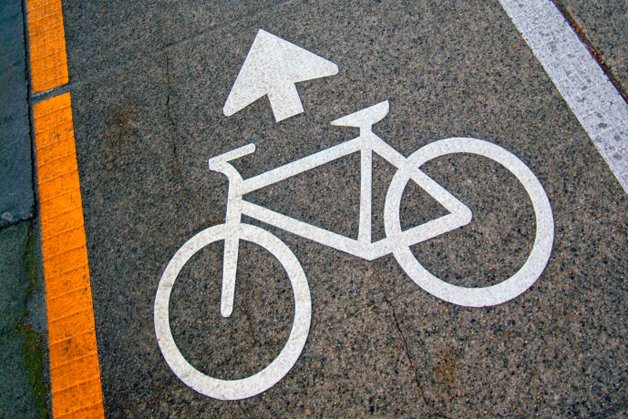 Toronto’s slow progress towards becoming a bike-friendly city continued Wednesday with the conditional approval of a slew of new cycling projects downtown.

Councillors approved a pilot project of two new physically separated cycle tracks on Richmond and Adelaide as well as a handful of new bikeways on connecting routes at a meeting of the Public Works and Infrastructure Committee. Upgrades to painted bikeways on Harbord and Hoskin also got the green light.

The Richmond-Adelaide project will add a physically protected east-west bike route to the downtown core and, unlike previous separated lanes like the one on Sherbourne, will be a brand new piece infrastructure as opposed to an upgrade to existing painted bikeways.

Council first commissioned a report on cycle tracks in the corridor in 2011, and Councillor Mike Layton, council’s foremost cycling advocate, is glad the city is finally following through.

“I’m very pleased. It’s something that we’ve been working on for a number years,” said Layton, a member of the works committee. He acknowledged that it has taken a while for the lanes to materialize but stressed that staff had limited resources to study the plan and the public had to be consulted. “We would all love to see it happen at lightning pace,” he said.

Richmond and Adelaide will each lose one car lane in order to make room for a westbound and eastbound cycle track, which will be separated from traffic by a painted buffer and flexi-posts. There will be no negative impact on existing parking spots or loading zones. but according to a staff report the tracks “will result in some traffic capacity reductions along these corridors.”

The Harbord and Hoskin corridor already has painted bike lanes for much of its length. The plan approved at public works would fill in the gaps by creating new bike lanes between Spadina and Borden, and replace existing regular bikeways with cycle tracks and lanes separated from traffic by painted buffers. In the process, the city will remove 39 parking spots.

The Richmond-Adelaide project is expected to cost $390,000 while Hoskin-Harbord comes with a $150,000 bill. The removal of the parking spots will cost the city an additional $221,000 in lost revenue.

Veteran cycling advocate Wayne Scott told the works committee that bike lanes on Richmond and Adelaide have been “needed in our city for a long, long time.” But he criticized committee for going ahead with a pilot project instead of permanent infrastructure, and said the proposed lanes aren’t long enough.

“We’re talking about a pilot project that only does half the job. It doesn’t go east of Yonge,” he said.

Dan Egan, manager of pedestrian and cycling infrastructure, disagrees. He says that the Richmond-Adelaide cycle tracks represent “such a dramatic change on the busiest arterial in the downtown core” that a pilot project was needed to test them out.

Egan predicts traffic impacts of the project won’t be too significant however, and says staff will be making changes to traffic signals to optimize the flow of motor vehicles.

Staff should know whether the pilot is working by the end of the year and will report back to council in 2015. In the meantime Torontonians will vote in the October municipal election, which raises the possibility that a new crop of council will turn around and scrap cycling projects approved by their predecessors. This term of council did just that in 2011 when they voted to remove lanes on Jarvis, Birchmount, and Pharmacy.

Egan says there’s nothing he can do to insulate the new projects from political changes. “The best we can do is bring our professional advice to council and council makes the final decision on these things,” he says.

In addition to the major routes on Richmond-Adelaide and Harbord-Hoskin, the works committee also okayed pilot projects for separated cycle tracks on Simcoe from Front to Queen, and bike lanes on Peter from King to Queen. Contra-flow lanes on Richmond between Bathurst and Niagara and on Phoebe and Stephanie between John and Soho were also approved. They will also need council’s approval next month to go ahead.