Its very cold out. Really very cold. So cold that streetcar lines are freezing up and walking your dog becomes. 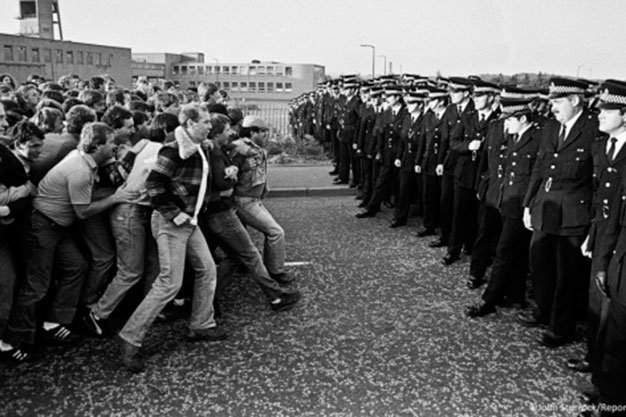 Its very cold out. Really very cold. So cold that streetcar lines are freezing up and walking your dog becomes a Herculean labour that only begins when you drag the little monster out of bed. (I may or may not be speaking from experience here.)

But there are several hundred people who are brave. They are committed to going down to the Bloor Hot Docs Cinema tonight (Wednesday, January 7) for the Doc Soup premiere of The Enemy Within.

The Enemy Within looks back at the 1984 miners strike that paralyzed and galvanized the United Kingdom when 160,000 coal miners, their livelihoods jeopardized by a cynical kneecapping of working-class trade unions by Margaret Thatchers muscle-flexing Tories, took to the streets in protest and were met with intimidation by the police which very quickly escalated into brutality.

The miners strike remains a raw nerve in the UK so much so that filmmakers often address it from an oblique angle in movies like last years Pride, which came at the story from the perspective of LGBT activists who found common cause with the miners. Its rare to see a documentary that comes at it head-on, compiling archival footage and interviews with the miners who were on the front lines of the conflict into a steadily paced, exhaustive narrative.

The pace is a bit of a problem, actually. While virtually every facet of The Enemy Within is compelling on its own, director Owen Gower never uses two talking heads if he has three available. Every fact and aside is echoed and underlined, as if the audience cant be trusted to absorb it on first exposure, and black-and-white re-creations are used when something is thought to require even more highlighting. (A good example of Gowers overkill: he spends almost half an hour recounting the decade of tensions between Tories and unionists that led up to the strike, which could have been explained in a handful of title cards.)

But once the strike heats up, and the police assaults on miners neatly carve the participants into heroes and villains, The Enemy Within finds the fury to which its been building. The handful of miners weve been watching tell their stories three decades later come to look like veterans of an undeclared civil war and Thatcher, seen tut-tutting at the violence she and her cabinet covertly fomented in a handful of news clips, makes a fantastic villain. Honestly, its amazing, three decades later, to think this condescending gargoyle was ever placed in front of a camera as a paragon of any sort of virtue, conservative or otherwise.

Doc Soup is offering three screenings of The Enemy Within this week, and Gower will be present for Q&As at all of them. Tickets are available here, though tonights 6:30 pm show has already sold out. Rush tickets are available, but this will require lining up outside. Maybe consider attending the 9:15 pm show instead or catching the encore screening tomorrow (Thursday, January 8) at 6:45 pm. It might even be a degree or two warmer by then.