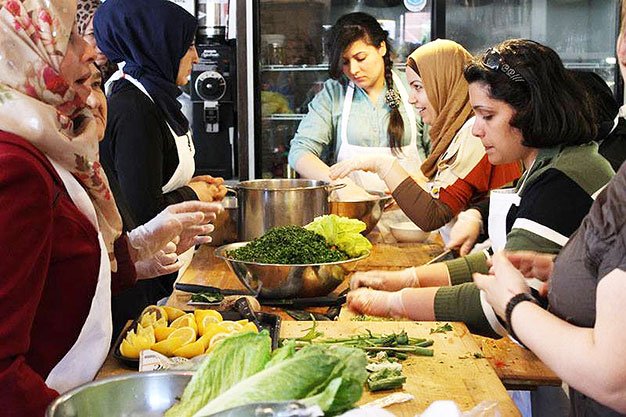 College St. kitchen The Depanneur is all about connecting chefs – be they amateurs or seasoned pros – with culinary facilities and a hungry public. So when they donated their space to a group of Syrian refugees looking to start new lives in Canada for a series of pop-up dinners, it seemed like a match made in heaven.

The project, Newcomer Kitchen, has since enjoyed widespread news coverage (including in the pages of NOW) and welcomed dozens of diners looking to welcome the newcomers to Canada (and sample Syrian meat pies, fattoush and semolina cake).

As a result of the success of the program, Depanneur owner Len Senater says, co-ordinating the dinners has required a considerable amount of capital and volunteer labour – everything from finding translators to lining up childcare and co-ordinating transport for cooks.

The cash will go toward salaries for newcomer liaisons, legal and accounting fees incurred while incorporating a non-profit, and hiring translators and IT support, as well as developing a guide for other Newcomer Kitchen-style projects in other cities. Perks include discounts or prepaid meals at the kitchen, as well as a gift pack of LUSH products and signed cookbooks. Check out the campaign here.