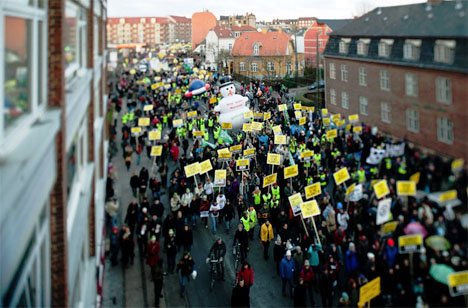 It has been a stunning day of climate action around the world with Avaaz reporting more than 3,000 vigils worldwide.

Here in Copenhagen, an estimated 100,000 people marched from downtown to the Bella Center where the climate negotiations are deeply in progress. And actions are still taking place in hot spots around the city. The high point for me is a chance to get up close while Archbishop Desmond Tutu offers up some inspiring words served up with a hearty dose of his signature hoots and cackles. He would have been an awesome beat-boxer if he been part of a different generation. Tutu is an energy imp but his wide smile packs a punch.”They marched in Berlin and the wall came down,” he tells us. “They marched in Capetown and Apartheid came down.” And of course, coming from him, this line carries some heft. So when he adds, “When they marched in Copenhagen…”, the crowd is ready to offer up the answer. “They got a real deal that’s fair, ambitious and binding.”

Good on 350.org and Avaaz and the huge coalition that has crafted a simple yet thorough message that sums up our hopes for these complex negotiations.

There is no doubt that the light from all those candles does truly provide illumination. Just moments ago, their impact is affirmed by none other than the Executive Secretary of the proceedings himself, Yvo de Boer who just an hour earlier, showed up at the rally to receive one of the sails which had been carried on the march.

His first comments at the press conference that follows, which is called to report on the current state of negotiations, is to remark on “the thousands outside the hall who are demonstrating and calling for a strong outcome to these negotiations.”

Like his head wrangler, COP President Connie Hedegaard sitting beside him, de Boer is working 24/7 with the “parties” as the countries are called, to get the deal done.

“We need more than good intentions, we need action,” he says. “We need an ambitious agreement,” echoing the protesters outside. They are both very clear that the outpouring of civil society is key to the process unfolding at the negotiating table. “It is absolutely sure that this pressure, which has taken years to build, has contributed to making the political price for not suceeding in Copenhagen very high. I am sure leaders are considering that price,” says Hedegaard. She also notes that the ministers and some heads of state are starting to arrive – earlier than expected to rollup their sleeves and get to work. “As the ministers start to arrive in Copenhagen, so does the political will,” she says.

But there is a long way to go. And judging from de Boer’s remarks, one of the key demands of civil society, legally binding, is most certainly at risk given the complete certainty that that the U.S. will not sign on to Kyoto.

It looks like de Boer and Hedegaard will consider a series of ambitous political agreements that trigger real action a win, with the legally binding piece coming within six to 12 months. But history will judge them both harshly if they sell us empty promises. And they know it. As early as two days ago, de Boer was saying that Kyoto must survive.

Thank goodness the loud voices of civil society have set themselves an important place the table as the talks ramp up over the next week. One thing is certain, politicians in all delegations will ignore us at their peril. That is the reality that has forced even Stephen Harper to show his face here later in the week.[rssbreak]