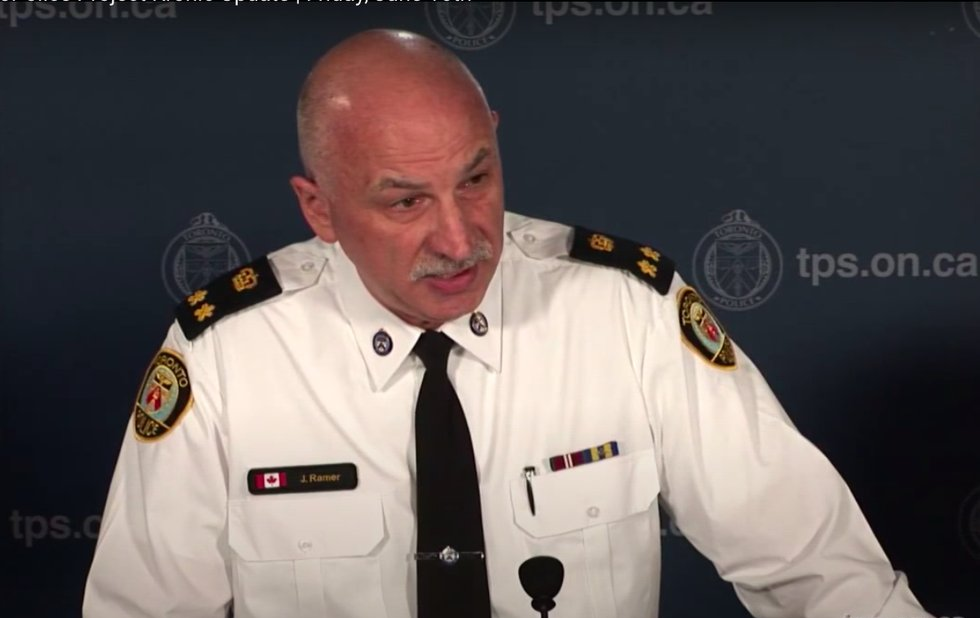 The zero per cent increase for 2021 is being touted as “transformational.” But the creative accounting to arrive at a $1.076 billion figure amounts to “kicking the can down the road” for another year when it comes to the hard budget questions, which staff acknowledged under questioning from board members. Staff also identified the inability to draw on dwindling reserve funds to cover future budget costs as a growing concern.

Interim police chief James Ramer maintained that the budget is a reflection of the force’s commitment to “doing more, without asking for more.” The phrase was repeated often.

Ramer said the force has heard loud and clear from Torontonians after last summer’s protests and calls for police reform, and that Toronto police are “doing our best to be responsive.”

To that end, the force is touting investments in “community safety priorities.”

Among those are the deployment of 11 additional officers to its Mobile Crisis Intervention Team (MCIT), which handles calls for people in mental health crisis. The program is being expanded from 10 hours a day to 24 hours. The force is also piloting a program at its 911 communications centre “to help divert calls to a community agency where police response is not required.”

The force’s Neighbourhood Community Officers program, which Toronto police say “has received enthusiastic feedback,” will be expanded in up to 10 additional neighbourhoods. Finally, a team of 18 officers will also be dedicated to road safety after one of the deadliest years on record for pedestrian deaths – not to mention, questions about police enforcement. Gangs and guns prevention programs and more money to combat hate crimes have also been identified as force priorities.

But despite all the talk of reform and a commitment to “modernizing” the Toronto force, Ramer says that “fighting crime and keeping people safe will always be our singular focus.”

To be sure, the staff’s budget presentation to the Board emphasized that under the Police Services Act, Toronto police are required to provide a certain level of service.

With a growing city and more 911 calls for service, staff suggested that more police will invariably be needed. According to staff, some 500 to 800 positions have remained unfilled since 2010, only that has not translated into significant savings. There has been a 26 per cent increase in pay for members of the Toronto force since 2010. The overall budget has increased by 21 per cent during that time.

Staff say it can’t be predicted where costs for police personnel will go when the current contract with the Toronto police union expires – some $17 million is going to cover a 1.6 per cent pay increase this year. Premium pay levels remain in the tens of millions at some $48 million. Some $8 million has been budgeted for workers’ compensation board claims. More than $110 million will go to cover Ontario and Canada Pension Plan contributions.

And therein lies the rub. With 90 per cent of the Toronto police budget still going towards the salaries and benefits of the force’s 4,988 uniformed officers and 2,400 civilian members, without a sizable reduction in staff the budget seems locked in a cycle of ever-increasing costs.

While Toronto has one of the lowest number of police per capita of large cities in North America, it has also enjoyed some of the lowest major crime rates over the last decade while budgets have continued to increase.

Recently, frontline agencies calling for a reallocation of some 30 per cent of the police budget to social services pointed out that the overpolicing of the homeless, racialized groups and the mentally ill accounts for some $340 million dollars annually.

The theme was echoed by John Sewell of the Toronto Police Accountability Coalition.

“The budget as presented is business as normal. But this is not the year for `business as usual’,” says Sewell. “After the killing of George Floyd by Minneapolis police, there is a public focus on policing that we have not seen for many decades. This budget does not recognize or respond to these demands for changes in policing in Toronto.”

Sewell points out that Ontario has one of the highest rates of withdrawn charges in the country – some 46 per cent of all charges laid by police don’t even get to court, compared to some 10 per cent in Quebec and 20 per cent in BC.

He also pointed out in his presentation the addition of some 105 staff in Detective Operations not mentioned in the budget. Howard Morton of the Law Union of Ontario also raised that issue, drawing attention to the fact that the budget provides no breakdown of some $81.4 million-plus dedicated to “Detective Operations Confidential.”

The city, meanwhile, is facing a $1.8 billion budget shortfall in 2021. Most of that, some $1.2 billion, will be covered by the province. Housing and homelessness remain major issues. But it seems unlikely that there will be a motion, as there was this past summer, to cut the police budget – even though that was roundly defeated.