A deal is still possible 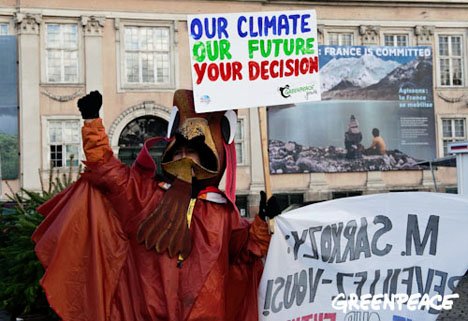 Today marks the mid-point of COP15 and here in Copenhagen, it feels we are suspended right at the centerpoint of hope and despair. But that’s good because the pendulum had been swinging on the down side.

Two new and possibly significant papers came out today that embody a sort of ambiguous optimism.

For one thing, it was promising that the two reports actually were released not leaked unlike a much criticized Danish document that caused an unfortunate stir just yesterday This is a good sign because it was looking like transparency was joining the endangered species list. Thumbs up for sharing.

The new papers have those crazy UN acronyms and diplomatic language that would drive anyone outside this bubble into a haze of instant mind-fog. But if you must know, the AWG-KP (ad hoc group on further commitments for annex 1 parties to the Kyoto Protocal) published a stunningly incomprehensible doc that seems to indicate that this important working group is standing by the Kyoto Protocol as opposed to sinking it and starting all over as both the U.S. and Canada so fondly wish. Continuing Kyoto is one of the main issues here so let’s say there is a somewhat positive (though inconclusive) aura about this development.

Likewise for a new report from the negotiating group working on Longterm Cooperative Action (LCA in COP-talk) which has come out with a six page doc down from more than 100. There are lots of options left in brackets but it is a form that suggests the possibility of an agreement. And the good news is that a science-based target of stating within either 1.5 degrees or 2.0 degrees of climate change is still on the table. Whew! And the long-term reductions slated for 2050 remain significant (up to 95 percent for the developed world).

The dark side remains as ever. Will long term dollars make it past the post from the developed nations to the developing word taking the biggest hits on climate change? Will the near-term targets come anywhere close to what science demands to prevent climate decimation in the decades ahead? Will the devil take the details?

Of course, Canada has been doing everything possible to make sure that the talks come to the least successful conclusion possible. In the last 24 hours, they have offered up enough idiocy to win both first and second place in the fossil awards presented daily by a coalition of 400 leading international NGOs. Canada’s Environment Minister, Jim Prentice, earned first place with the comment that “it’s in Canada’s interests to replace the Kyoto Protocol with a new agreement.” Yeah, because that would make the oil sands execs the happiest.

When our chief negotiator was asked this morning if he believed Canada’s so called “science based-target” would protect melting summer sea-ice in the North West passage, he responded quite accurately that he is not a scientist and therefore cannot predict sea-ice. I guess it doesn’t really matter if we inform ourselves before we scuttle a deal. The IPCC scientific community calls for 25-40% emission reductions below 1990 levels not Canada’s 3per cent.

But the really fun part of the Fossil Awards today, was that David Miller was there to receive them.. He told me after that he really was embarrassed. So watch the video and see if you can see him blushing.

Still, with this kind of “negotiating”, it’s really no surprise that very little has really happened here yet. And truth is, all the parties are still doing the diplomatic dance. But starting Tuesday, no less that 110 heads of state are slated to arrive. The hope is that the bigwigs are here to take up the challenge and make a real deal.

NGO veterans of these talks say it all happens at the end. Kyoto veteran Steve Guillbeault of Equiterre in Quebec remembers the last days before the Kyoto treaty was signed. He says that 24 hours before the end, there was no deal. “Everything is still possible including a good agreement,” he says.

I’m glad Guilbeault is nearby when I run into Avaaz founder Ricken Patel who is worried that it all might slip away. Patel is one of the organizers of tomorrow’s International Day of Action, so with over 1100 vigils on the go worldwide, he has cause to be a little stressed. Patel appreciates Guilbert’s Kyoto story but both would agree that this is the moment. Tomorrow’s Day of Action will weigh in when it comes to results here in Copenhagen. It is THE time to make our voices heard. Get out there today, even if you have never before. As David Martin of Greenpeace says, “we are heading for a high noon scenario.” Let’s all do what we can to make sure that the good guys win this draw.[rssbreak]