NOW MagazineNewsA Month In The Country

A Month In The Country 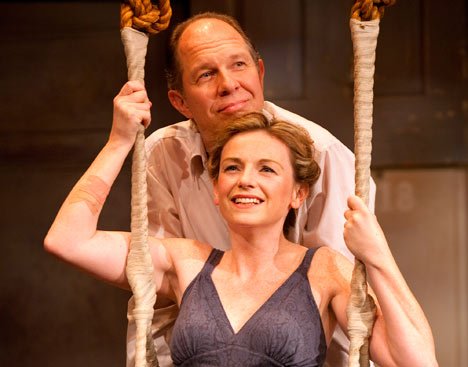 Cupid’s quiver of arrows must be empty by the end of A Month In The Country, Ivan Turgenev’s tale set on a mid-19th century Russian estate.

At its centre is Natalya (Fiona Byrne), wife of the workaholic Arkady (David Storch), who’d rather be involved in a project than paying attention to Natalya. She has a platonic admirer in the older Rakitin (Diego Matamoros) and has herself become infatuated with her son’s young tutor Belyaev (Jeff Lillico).

He, in turn, has fallen for Natalya’s adopted daughter Vera (Tal Gottfried) and has also caught the attention of others on the estate, including the maid Katya (Diana Bentley). Vera’s being courted by a nervous neighbour (Michael Simpson) his friend, Doctor Shpigelsky (Joseph Ziegler), fancies another of Arkady’s servants, Bogdanovna (Nancy Palk), though it’s a long way from romance.

In short, the story resembles an amorous carousel, its figures rotating with various degrees of desire and adoration.

Susan Coyne and director Laszlo Marton’s adaptation has the same lightness of touch that Coyne brought to her version of Chekhov’s Three Sisters. There’s a tonal similarity, too, in the work of the two Russian playwrights a slight twist turns the material from comic to serious and back again.

Marton, a regular guest with Soulpepper, fills his production with wit and humour, using the rich characterizations as the source of the script’s energy.

Byrne explores Natalya’s many moods as she shifts from controlling employer to jealous lover, demanding partner to chummy friend. Natalya’s a woman who needs people around her, a fact that gives the end of the play a sobering touch of sadness.

Matamoros is ideal as her willing toy, aware of Natalya’s interest in the tutor and often philosophical about it. Lillico emphasizes Belyaev’s boyishness and playfulness as he skateboards or creates a kite for his young pupil, and we believe the magnetism he has with Natalya.

The skilful Soulpepper ensemble knows how to knit the unspoken emotional connections among the characters, giving them a fullness that’s unrelated to their time on the stage. Watch Simpson, for instance, balance nervousness, ardour and shyness within a single sentence, or Matamoros roll anger, acceptance and putdown of Belyaev into a dismissive shrug of his shoulders Storch’s hugging acceptance of his two “rivals” is also finely handled.

There’s great work, too, in the doctor’s asking for Bogdanovna’s hand Ziegler and Palk make the scene one of the production’s highlights.

The last half hour of the production may be too protracted – the resolution could surely come more quickly – but Soulpepper gives us a memorable production of this rarely performed classic.[rssbreak]