NOW MagazineNewsA plan to save Haiti

A plan to save Haiti

Canada helped screw it up. Here’s how we can fix it. 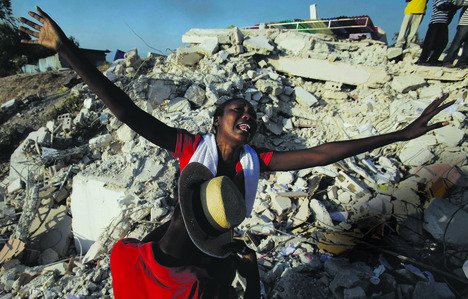 Maxi Phalone gives praise to God after her sister is pulled alive from the rubble of a collapsed building in Port-?au-?Prince. Canadas sending troops to help

Amidst the horror unfolding in Haiti and the dispatching of Canadian troops to the shattered country, it’s easy to forget that our government hasn’t exactly been a friend to the Haitian people. In February 2004, Canada, along with the U.S. and France, overthrew Haiti’s elected government, an event that ushered in a terrible wave of political repression and an ongoing UN occupation.[rssbreak]

Canada’s tentacles are all over Haiti, and a good part of that country’s misery bears a made-in-Canada label. The supplier plants of T-shirt giant Montreal-based Gildan Active Wear pay bargain-basement wages, while Canadian mining interests have prospecting rights to 10 per cent of Haiti’s territory.

Sure, Canada is a principal donor to Haiti and has committed $520 million for reconstruction and development between 2006 and 2011. But there is a sinister underside to this involvement: much of what Canada contributes in foreign aid is self-serving and detrimental to Haiti’s self-directed development.

The Canadian International Development Agency, for example, funded many of the NGOs that were instrumental in destabilizing the Aristide government in 2004.

The ongoing relief and rescue mission reflects Haiti’s client status vis à vis its powerful northern neighbours. Witness the way recovery efforts have been focused on the UN headquarters and the Hotel Montana, frequented by foreigners, while thousands of average Haitians lay trapped and dying.

Haitians need to regain control of their future. Here are 10 ways Canada could kick-start the process and redeem itself in Haiti:

2 Understand that the best aid empowers Haitians to control their own affairs. Haiti is a sort of NGO laboratory in a vulnerable society. These organizations, many funded by Canada, have a great deal of influence and are being promoted as agents of relief in the recent tragedy. Considering the circumstances, they are. But at the same time, foreign-funded NGOs have contributed to a process that has undermined Haitian governmental capacity. How would we like it if all our schools and social services were run by private foreign charities?

3 Fund a new Haitian government disaster relief ministry to immediately start paying unemployed Haitians – much of the population – to clear up rubble.

4 Give cash to the Haitian government to set up a housing ministry responsible for rebuilding neighbourhoods. Offer the money and expertise to strengthen building codes and inspection processes to ensure new construction meets safety standards. Involve Haitian architects and construction workers. Provide training free so know-how stays in Haiti.

5 Direct aid to encourage massive investment in Haiti’s countryside, where farming has been effectively destroyed. Haitians are poverty-stricken in large part because foreign aid policies favour sweatshop labour over agriculture, and the U.S. dumps rice on the Haitian market. Thirty years ago, Haiti produced over 90 per cent of its own rice today it’s less than 10 per cent.

6 Insist that Canadian companies in Haiti pay at least three times the minimum wage of $3 per day so that workers can afford to feed and house their families. Nine dollars a day is hardly extravagant.

7 Give the Haitian government resources to create a forestry ministry. Commercial logging for carbon (used for fuel) has created dangerous erosion, destroying the soil, worsening droughts and precipitating mudslides during storms. The ministry could seek funds from around the world to pay poor Haitians to plant trees.

9 Stop deporting young Haitians who have been raised here and commit crimes back to a country where most can’t remake their lives. Open our borders to Haitian immigrants, using the broadest interpretation of family reunification.

10 Once this is all done, get the heck out and let Haitians run their own country.

Yves Engler is the co-author of Canada In Haiti: Waging War On The Poor Majority (Fernwood). His most recent book is The Black Book Of Canadian Foreign Policy (Fernwood).