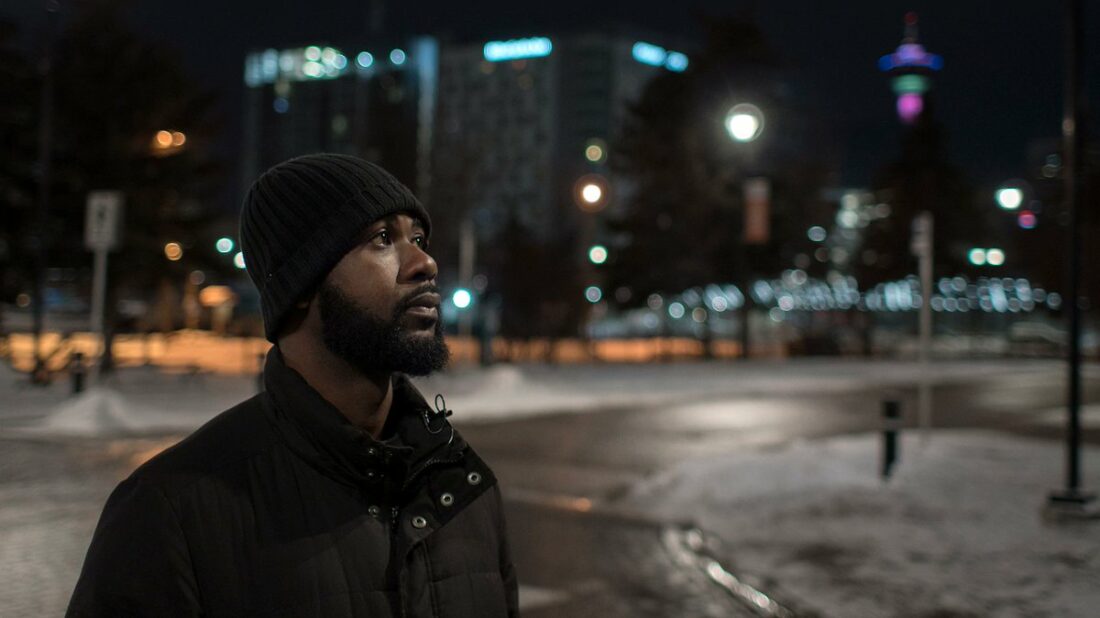 Godfred Addai-Nyamekye revisits the site of his police assault in Above The Law.

There’s no shortage of documentaries about police brutality right now, but CBC POV’s Above The Law – airing nationwide at 8 pm Saturday (July 11) on CBC, and is already available to stream on the broadcaster’s Gem service – is notable for the way it addresses multiple points of the issue.

Five years in the making, Marc Serpa Francoeur and Robinder Uppal’s look at three recent cases of police abuse of authority in Calgary touches on anti-Black racism, wellness checks and the unnecessary use of force – and the way the police’s internal investigations almost never hold officers to account for their misdeeds.

When the car he was driving got stuck in the snow, two officers transported Addai-Nyamekye from the vehicle (and his friends) to a construction site on the edge of the city’s downtown and left him there with no shelter against the -28 weather. Addai-Nyamekye called 911; they hung up on him. Eventually a constable, Trevor Lindsay arrived, told him to stop calling 911 – then tasered and beat him.

Though Addai-Nyamekye filed a report, the officers remained on the job – and Lindsay wound up mired in an even uglier case, caught on camera assaulting Haworth in a parking garage. Haworth, the son of a former Calgary cop, had been arrested on suspicion of theft, and handcuffed; his skull was fractured in the assault, leading to traumatic brain injury.

Heffernan’s case is murkier but no less acceptable: when the 27-year-old electrician and recovering addict relapsed in a Calgary hotel, five police officers arrived for a basic wellness check – leading to Heffernan being shot four times, and killed.

Above The Law tells these stories simply and directly, interviewing survivors and families and using security-camera footage of Lindsay beating Haworth to illustrate the brutality of the constable’s assault – and to efficiently refute the self-defense argument brought by Lindsay’s attorney at his trial. (Lindsay was convicted of aggravated assault last June, and is still awaiting sentencing.)

Francoeur and Uppal don’t employ any big stylistic flourishes; they don’t have to. The horrors of police abuse are clear, as is the lip service paid to police reform every time a new case comes up; after all, isn’t the Alberta Serious Incident Response Team tasked with investigating “police officers whose conduct may have caused serious injuries or death”?

Well, ASIRT investigated 71 officer-involved shootings and in-custody deaths between 2013 and 2019; charges were laid exactly once. Above The Law shows us how it works, and while the doc allows that the arrival of new chief constable Mark Neufeld last summer might bring some desperately needed reform … yeah, that’d be nice, but I get the feeling we shouldn’t hold our breath.