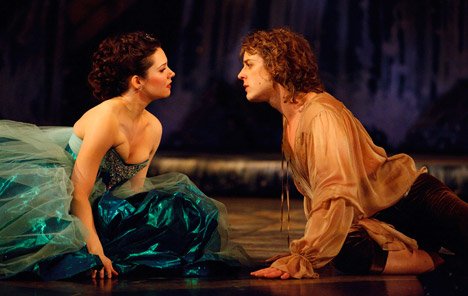 That’s one of the lessons in Handel’s pastoral opera Acis And Galatea, given an elegant but unfussy staging by Opera Atelier as part of the company’s 25th anniversary season.

How far the company has gone, as co-director Marshall Pynkoski noted, from the day a quarter century ago when he and partner Jeannette Lajeunesse Zingg plugged in a cassette recorder at the ROM and offered curious audiences examples of baroque dance, a style that viewers probably hadn’t seen.

Their latest Handel offering is the tale of the shepherd Acis (Thomas Macleay) and the water nymph Galatea (Mireille Asselin), whose harmonic life in Arcadia is interrupted by the giant Polyphemus (João Fernandes). Size determines the victor in the fight between shepherd and giant Galatea, mourning, transforms her dead lover in order to perpetuate him and his memory.

Pynkoski turns the fourth character, Damon, who’s usually presented as another shepherd, into a kind of amoral nature sprite Acis calls him “genius of the mountain,” referring not to his intelligence but identifying him as the divine spirit of the place. Lawrence Wiliford’s performance, combining stylish singing and sharp acting, is perhaps the most striking in the production.

The other three soloists are also memorable, with Asselin capturing the sensual, temperamental quality of Galatea and investing her with some comic moments, as well. Macleay’s lyrical tenor suggests the naïve side of Acis as well as his boyish passion and romantic pain when he’s not with Galatea. The two singers share a strong chemistry, a sense that they’re mutually fascinated with each other. That’s a plus in Pynkoski’s staging, which emphasizes the text’s eroticism.

Fernandes’s dark voice suits the monstrous side of the giant, though I wish some of his humour weren’t so heavy-handed. The humour sometimes turns cutesy in other segments, such as Zingg’s choreography for several dancing birds.

Conductor David Fallis and the Tafelmusik ensemble, both orchestra and choir, sound ravishing, though the playing could occasionally have more bite.

The defining point of this production is its simplicity, from Gerard Gauci’s sets and costumes and Kevin Fraser’s lighting to the style of singing. In most cases, the repeated sections of arias bring the singer to a spotlit centre stage: the focus is telling the story, sharing the emotions and captivating the audience with beautiful music.