In an open letter to the Prime Minister, activists say Canadian weapons sales is prolonging the humanitarian crisis in the Saudi-led war in Yemen 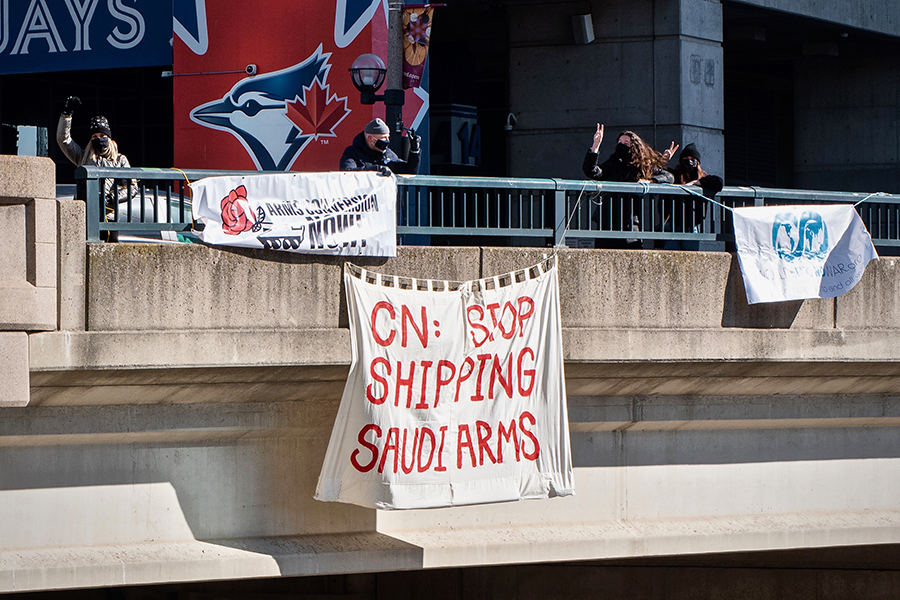 Activists dropped banners from a CN overpass in downtown Toronto on Friday to draw attention to the railway company’s role in shipping weapons to Saudi Arabia.

Rachel Small, Canada organizer for World BEYOND War, says the use by Saudi troops of Light Armoured Vehicles (LAVs) manufactured by General Dynamics Land Systems in London, Ontario has been well-documented in the war in Yemen where a humanitarian crisis is unfolding.

“It’s long past time for Canada to do the same,” says Small.

The letter penned by the Canada-Wide Peace and Justice Network and signed by some 68 organizations, is also calling on the Canadian government to increase humanitarian aid to Yemen.

Now entering its sixth year, the Saudi-led war has killed almost a quarter of a million people and displaced some four million more.

Last week, Karina Gould, Canada’s Minister of International Development, announced some $69.9 million in humanitarian aid to the country in 2021.

“Yemen is undergoing the world’s worst humanitarian crisis, and its people deserve decisive action,” Gould says. “Their suffering must end and their rights and dignity must be protected. We must do everything possible to make this happen.”