After raising $300K in a GoFundMe campaign, there was a problem with the paperwork on the case that was supposed to expose the pandemic as a global hoax 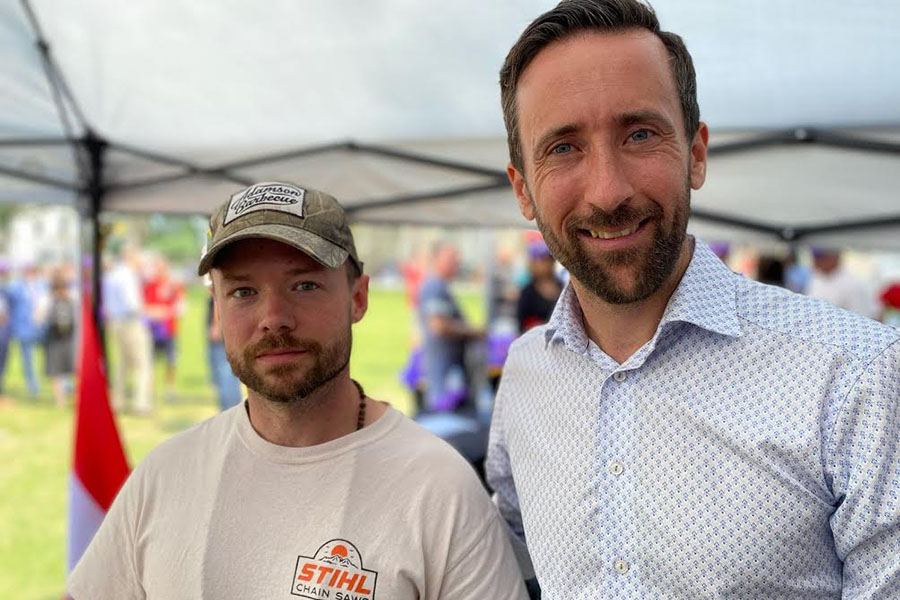 The BBQ Rebellion is over. Adamson Barbecue, the Etobicoke-based purveyors of Texas-style barbecue, has lost its bid to have lockdowns necessitated by the pandemic under the Reopening Ontario Act declared unconstitutional.

The highly anticipated court case – Adamson owner Adam Skelly had been promoting the case as the one that would expose the vast global conspiracy that the pandemic is a hoax – was over before it got started on Monday. Apparently, there was a problem with the paperwork.

A proper notice hadn’t been filed by Adamson’s legal team with the court. That left Superior Court of Ontario Judge Jasmine Akbarali with little choice but to rule that she had no jurisdiction to hear the matter.

That was all the evidence some of the 500 or so Adamson supporters who tuned in to watch the hearing via Zoom needed to declare the fix was in.

Skelly, who had raised more than $300K through a GoFundMe campaign to launch the legal challenge after his restaurant was shut down for ignoring the first lockdown order, told supporters on social media that the fight is not over. He plans to take this one all the way to the Supreme Court of Canada if necessary.

But whether the case even sees the light of another courtroom is highly doubtful. It may have already had its 15 minutes.

Lawyer Caryma Sa’d, who has been spending a fair bit of her time lately following the various permutations of the anti-lockdown movement, was among those who tuned in to watch the proceedings. She says it’s hard to overstate just how badly Adamson’s legal team dropped the ball on this one – like, big time.

“Somehow NOBODY (her emphasis) thought to ask the court for the relief they were seeking. I’m trying to think of a metaphor to explain how ridiculous that is,” she says in a message to NOW.

Indeed, Skelly had made a point of telling his followers that he had “hired and fired” six lawyers before settling on Ottawa-based lawyer Michael Swinwood to head up his team. Swinwood, whose practice focuses mostly on representing Indigenous clients, says he’s still trying to get his head around the judge’s decision, which also ordered Skelly to pay the Crown $15,000 in legal costs, presumably for wasting the court’s time.

Swinwood tells NOW in an interview that the procedural issue raised by the judge was “fixable,” but that “there doesn’t seem to be an appetite for a debate on the issue.” The “issue” here being the accepted science on COVID-19.

To Swinwood COVID-19 is “no worse than the seasonal flu.” Worse, it’s a conspiracy concocted by the pharmaceutical companies to sell vaccines.

“Who made Bill Gates the leader of the world?” he asks.

There’s a good reason for the Gates reference, but in Swinwood’s case it has less to do with the conspiracy theory that the billionaire Microsoft head wants to allegedly implant microchips in people. Swinwood is also behind a class action filed against the Ontario and Canadian governments that names as defendants, among others, the Bill and Melinda Gates Foundation, the World Health Organization and the Pope. That suit alleges that lockdowns were ordered “without due process.”

Swinwood admitted in an interview with the CBC in February that he expects the suit will be dismissed as “frivolous and vexatious” but “the facts are all there.” Those “facts” hinge on the alleged unreliability of PCR nasal swab tests used to diagnose COVID. Swinwood suggests false positives are being used to justify the existence of a pandemic.

Similar arguments are being used in Skelly’s case. To that end, a team of highly paid experts, some of them boasting affiliations with Ivy League universities, had been assembled by Skelly at between $200 and $300 an hour.

In the lead-up to this week’s anti-climatic events in court, Skelly claimed that the challenge submitted by his all-star team “shreds the mainstream narrative of a deadly pandemic which warrants stay-at-home orders, business and school closures, social distancing measures and mask mandates”.

But a closer look at the ensemble reveals a cast of characters with some questionable – and familiar – theories popular in conspiracy circles.

• Joel Kettner, the former chief medical officer of health of Manitoba, questioned whether mortality rates would have been significantly higher without the use of lockdowns in an article published by the CBC last year. Sweden’s experience suggests otherwise. What Kettner’s resumé doesn’t mention is that he was terminated by the province in 2012, two years before his contract was set to expire, for reasons that have not been publicly disclosed.

• Douglas Allen, a professor of economics at Simon Fraser University, is another who is of the view that lockdowns have at best had a marginal effect on COVID deaths.

He offered in a recent research paper that lockdowns, “will go down as one of the greatest peacetime policy failures in Canada’s history.” He planned to back that theory in court with some 90 case studies he’s read on the subject.

But back in 2014, his research became the subject of scrutiny when he cited three studies to make the case that same-sex parenting doesn’t stack up to the hetero kind. He ended up testifying as an expert witness in Michigan’s case against overturning a ban on gay marriage.

• William Matt Briggs, another expert on statistics, is from Cornell and describes himself as a “statistician to the stars” on his Twitter profile. A quick search of his website suggests he also has an unhealthy preoccupation with the fact federal institutions like the FBI have decided to fly the rainbow flag (or “pervert pennant” as he refers to it).

He’s a member of the conservative think tank Independent Institute founded by Libertarian David Theroux, which among other policy areas pushes the idea that climate change is not real and that firearms control is unnecessary.

The summary of evidence he was prepared to give states in part that “non-pharmaceutical interventions such as lockdowns, social distancing, reduced capacity in public venues and masks did nothing to slow or stop the SARS- CoV-2 virus from spreading nor did they prevent the disease COVID-19 (or COVID for short) from taking its toll.”

• Gilbert Berdine is a Harvard and MIT-educated pulmonologist. He’s also a member of the Free Market Institute at Texas Tech University, which “advances research and teaching related to the free enterprise system and the institutional environment necessary for it to function well.” His work for the Mises Institute questioning the validity of vaccine effectiveness has been reprinted on the far-right conspiracy website Infowars.

• Harvey Risch, a professor of epidemiology at Yale, was an early proponent of the widely discredited use of hydroxychloroquine as a treatment for COVID-19. His support of the drug, including in a submission to a Senate committee, caused his colleagues at Yale to issue a statement saying he was citing “questionable data.” The statement also points out that Risch is not an expert in infectious disease epidemiology.

• Byram Bridle is a professor of virology and immunology at the University of Guelph. He took part in a press conference with former Conservative MP Derek Sloan recently questioning the efficacy of COVID vaccines. He says children shouldn’t be vaccinated, telling Global News that the spike protein that the body produces from the vaccine is toxic and can damage organs.

Also noteworthy: Bridle’s lab was given $230,000 from the Ontario government to develop a vaccine.