I used to feel ashamed about being on disability, but now I’m just pissed off. It doesn’t work. Not in this town. Not in 2019. 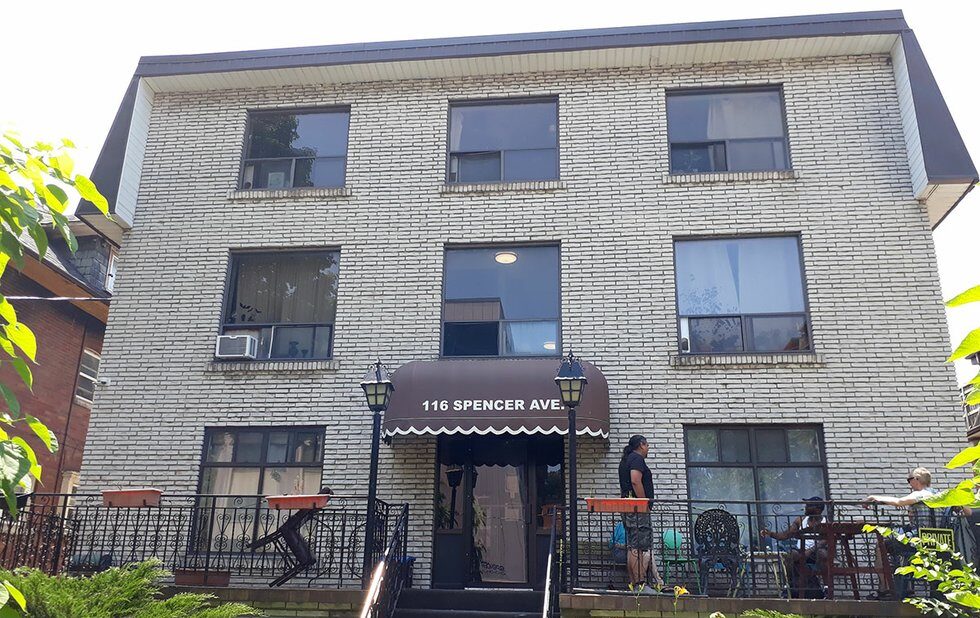 For those not acquainted with the neighbourhood, this is decidedly not the hip enclave now insufferably referred to in some circles as Vegandale. Is it hyperbole to suggest that this allotment is insane?

I don’t know how things look in Windsor, Moosonee or Wawa (probably not great) but the average market price for a one-bedroom apartment in Toronto is now $2,260.

You won’t even find a dilapidated, drug- and bug-infested place to sleep in an illegal rooming house on the outskirts of town for $457. I know of such a grim spot conveniently located near the Daily Bread Food Bank in South Etobicoke (now New Toronto) but even there you’re looking at $600 a month.

If my rent were lower I’d be eligible for money under the city’s Housing Stabilization Fund (HSF), but my application has been denied because my rent is just too darn high!

Allow me to explain. After the province dumped the Community Start-up Fund on municipalities in 2013, the HSF was flown in to help people get off the streets and out of the shelters by providing the average individual with up to $1,600 for first and last months’ rent and/or moving costs, arrears on utilities and, for first-time tenants, some household basics. The city has under-spent the budget by an average of $3.5 million a year since 2013.

But as my rent exceeds 85 per cent of my income, the city feels I should try to find something more affordable as they are unwilling to support such an irresponsible and lavish lifestyle choice, which I clearly cannot afford.

Under more reasonable circumstances I would agree with them. I remember hearing my parents say something similar to me when I flew the coop as a teenager. But back then there were more options. With the occupancy rate and rent situation being what they are, what choice do I have?

It was quite literally the cheapest apartment I could find this side of a crack house after ending up at Seaton House last month. (I had to borrow from a friend for the rental deposit and will be paying it back by giving his son guitar lessons for the rest of my life.)

Now if I had a child, the city might understand that a spot in a rooming house just wouldn’t do. Oh, but wait. I do have a child. But not as far as they are concerned, as I am no longer living with my son’s mother (my ex-wife) who, as the primary caregiver, rightfully collects the Child Tax Benefit.

I am fortunate to have shared custody of a bright light of a son on the cusp of adolescence. He stays with me overnight several times a week, but at this point can no longer share a room with Dad. Need I remind you, dear reader, of that turbulent stage of life where privacy is essential?

But at least our basement shoebox (really just a bachelor with a dividing wall) is close to school and is in a building that is both clean and safe with bars on the windows and three locks on the door.

I sleep on a yoga mat on the floor in the living room/kitchen, which is good enough for now. But I need a little dough to get him a bed, maybe a couch, a couple of fire extinguishers (there is no fire door), as well as some proper kitchen stuff before he can actually start staying with me again. That’s why I applied to HSF.

The rejection of my application came in the form of a terse letter that concluded by informing me that I have the right to appeal.

So I sat down on the floor and wrote them a letter. Instead of sending it by snail mail (you cannot contact any social service agency by email), I decided to go in person to their office on Wellesley East, an imposing-looking building where Ontario Disability Support Program staff sit in judgment of the city’s more vulnerable citizens.

Cops with flack jackets, tasers, Glocks and cuffs stand two by two keeping watch over us po’ folk. Suddenly I’m not so confident in the success of my appeal.

Luckily after my now trademark mezzo-forte display of self-righteous indignation, an act that is beginning to wear me out, I find a sympathetic ear – a worker named Betty offers to find a supervisor.

Elizabeth is cool. But workers are alternated frequently to maintain a dispassionate detachment from clients. Conversations are meant to be quick and impersonal. Some workers are suspicious. Some behave like insurance adjusters (I guess they are) whose true aim is to not release the funds you hoped you had coming. Others are just downright rude. Mostly they’re more bureaucratic functionary than a sympathetic ear. There are simply not enough of them – each worker has approximately 600 clients.

Later, I am escorted to a small, windowless room on the expansive and disorienting first floor. There’s a desk with a computer bolted to it, a telephone, two plastic chairs and buzzing fluorescent lights.

Across from me sits a weary but kind-eyed bespectacled man in his late 50s named Les P.

He gives me his card.

I give him mine.

He suggests I look for work.

I work constantly, I tell him. Take a look at my website.

I explain to him that it’s because of the episodic nature of my illness that I’m on disability.

“Don’t give up,” he tells me. He was in a rough spot once 10 years ago, he says, but eventually things turned around. “Sometimes it feels like you’re treading water,” he continued, “but you’re actually making progress.

“When you’re underemployed it’s difficult to survive,” he adds.

He finishes with, “You decide to take some courses, but then an offer in your field comes along, but it doesn’t last and on it goes.”

He promises to take my appeal letter to the appropriate functionary in the appropriate department, but explains that he can’t get “creative” where the rules are concerned.

Several days after my visit I receive a letter from a Gary C., although it’s signed by a Les S. (not to be confused with Les P.). Gary C. is the supervisor of the Direct Program Appeals Unit Quality Control & Assurance. Gary C. writes that my letter “requesting a review by the Review Committee must first undergo an internal review.”

I appreciate the fact that I’m lucky to live in a wealthy country and in a society where I am able to obtain assistance so that I can survive, raise a kid and hopefully make a humble contribution through my work in the community. I used to feel ashamed about being on disability. (I’m now in my eighth year and I’m 46). But now I’m pissed off.

Les and others in his position can’t get creative with the rules. But someone’s gotta.

One response to “My affordable housing trap”