Throughout a month-long campaign race thick with vitriol, “Build that pipeline” has become Jason Kenney’s version of Donald Trump's “Build that wall” 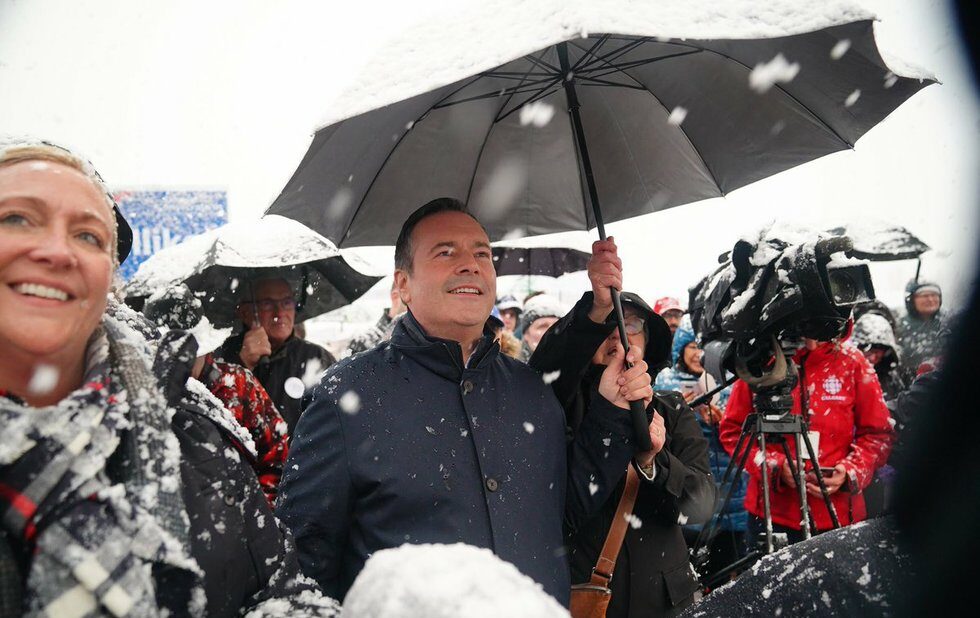 Progressive Albertans have been caught off guard by the success of Jason Kenney's me-first brand of conservatism.

Progressive Albertans have been caught off guard by the success of Jason Kenney's me-first brand of conservatism.

Alberta slipped into the abyss when Jason Kenney left federal politics and came back to town to take over the Conservative party and run for premier. Alberta’s election Tuesday (April 16) tells us an unscrupulous politician adept at manipulating three human characteristics – racism, greed and conservatism – can successfully worm his way into power.

Throughout a month-long Alberta provincial election campaign race thick with vitriol, the former Harper-era cabinet minister has somehow managed to convince Albertans who survived the booms and busts created in the oil patch by his government’s own short-sightedness – putting all your eggs in one economic basket isn’t wise – that their current economic troubles were someone else’s fault.

Kenney pointed the finger at the usual suspects: NDP leader Rachel Notley’s “socialist” government, her BFF Justin Trudeau, the rest of Canada who hates us because we’re rich (and use the equalization formula to suck us dry), and American NGOs plotting with radical environmentalists to kill our energy sector (and forestry and agriculture, but who’s counting?).

Everyone is victimizing poor little Alberta. “Build that pipeline” has become Kenney’s version of Donald Trump’s “Build that wall.”

There have been other popular scapegoats during the campaign – women, minorities, members of the LGBTQ community – but Kenney has left those attacks to his redneck supporters.

Let’s start with the ground zero question, which was put to Kenney by conservative radio host Charles Adler: why are “knuckle-draggers” who bash gays, women and Muslims attracted to Kenney’s party?

Kenney called the question an insult, but the answer is obvious: Alberta’s racists, homophobes, Islamophobes and misogynists are well aware of who Kenney is and what he represents. They support him because he validates them.

He’s never disavowed his history as an anti-choice, anti-gay activist, not to mention his “perfect” (at least in the eyes of the Campaign Life Coalition) voting record on abortion rights. His ban on the niqab and promotion of the barbaric practices snitch line when he served a multiculturalism minister in the Harper government show Alberta’s knuckle-draggers he hasn’t changed.

But wait, didn’t Kenney say his United Conservative Party (UCP) is a big tent and that he doesn’t support extremists?

He did, but Kenney’s words, like his short-lived “grassroots guarantee” to develop party policy from the ground up in the UCP, aren’t worth the paper they’re written on.

Yes, he was forced to disqualify some racist and homophobic candidates (even Kenney couldn’t ignore them), but the fact that they got through his supposedly robust vetting process in the first place leaves many Albertans wondering. His mild condemnations didn’t help.

First among those was UCP candidate Caylan Ford, who publicly questioned “the demographic replacement of white peoples in their homelands” and whether Pride parades have any redeeming value. Kenney personally recruited Ford from Ontario and parachuted her into a winnable riding. How could Kenney not know where Ford stood?

Kenney went as far as to thank candidate Eva Kiryakos’s “selfless decision” to resign after claiming Muslims used forced breeding as a form of Christian genocide and gay-straight alliances in schools are meant to convert kids. In fact, Kenney put her comments “in context” by noting she was from a Middle Eastern refugee family, a community that had faced a history of genocide, as if that made them any less wrong.

Then there’s John Carpay. The founder of the Justice Centre for Constitutional Freedoms made national headlines after comparing the Pride flag to a swastika earlier this year. Not only is Carpay still a card-carrying UCP member, Kenney quoted Carpay on the need to allow schools to out gay students to their parents in speeches about the primacy of parental rights.

Meanwhile incumbent Mark Smith, who has made comments linking “homosexual love” with pedophilia, remains on the ballot. Kenney gave Smith a pass because in all of Kenney’s dealings with him, Smith had reportedly been “respectful and civil.”

When you’re looking for votes, words speak louder where Kenney is concerned.

But what about the moderate conservatives, the so-called Red Tories – why would they vote for Kenney?

There are two reasons: most are either life-long conservatives (brand me and I’m yours forever) who believe Notley’s socialists must be eradicated or they’re “proud capitalists” who may admit Notley has done a good job under difficult economic circumstances but refuse to support her because she raised their taxes.

They object to progressive taxation on principle and won’t be hurt by Kenney’s proposal to freeze spending on public services because many of them send their kids to private schools and can afford to fly to the U.S. for medical treatment. They’re prepared to sell their morality for ideology or a tax break. If that means electing a party beholden to knuckle-draggers, so be it.

Progressive Albertans have been caught off guard. We had a Pollyanna view of the rest of the province, that our friends aren’t racists or me-first conservatives, which is weird given that this isn’t our first rodeo – we watched Trump and Doug Ford be carried to victory.

But we looked away. We didn’t call out Kenney when we had the chance.

Be warned, Canada. Victimhood, greed and racism are potent in the hands of an opportunistic politician. It will propel a populist leader right into the Prime Minister’s Office if we let it.

Susan J. Wright is an Alberta-based lawyer and writer.