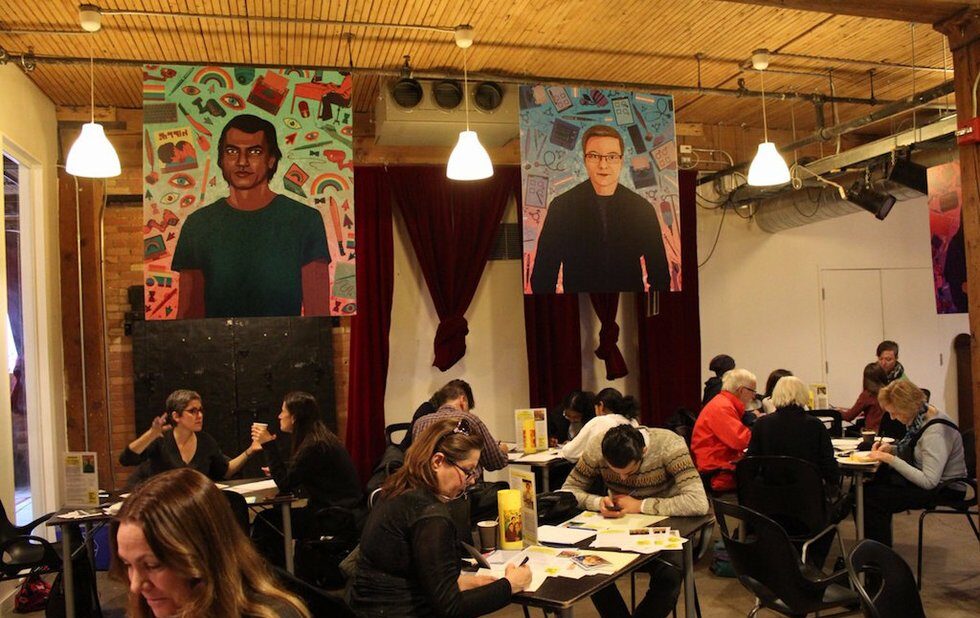 #WriteForRights, Amnesty International’s biggest local event of the year, took over the Centre for Social Innovation Annex on December 10.

Every year, people from more than 180 countries take part in the day-long marathon to write, tweet, email and sign petitions urging governments around the world to release prisoners of conscience and protect human rights defenders. Mary Macrae has been attending the event for years. “There’s always this question if it really works,” says Macrae. “It does.”

Earlier, Kathy Price, Amnesty Canada’s Honduras campaigner, shared pictures and intimate details of her experience on the ground with MILPAH, an Indigenous movement risking their lives to save their land from hydroelectric, mining and other interests. I think of how the issues there parallel with what’s happening in the Peace River Valley in British Columbia, where this week the newly elected NDP government approved the Site C hydroelectric dam project despite widespread Indigenous opposition.

After Price finishes her speech, local performers play music as we absorb what we just heard and try to channel the emotions into powerful written words.

Every hour, MC Michelle Doyle provides a count on how many letters the group has written – five letters earns a hand massage provided by the Sutherland-Chan School of Massage Therapy – and encourages us to help ourselves to the many snacks and drinks available. Her humorous banter keeps our spirits up. 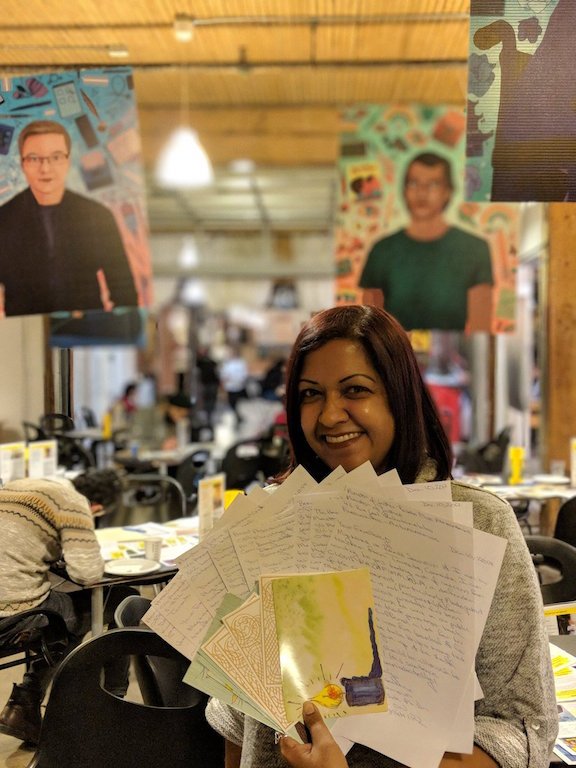 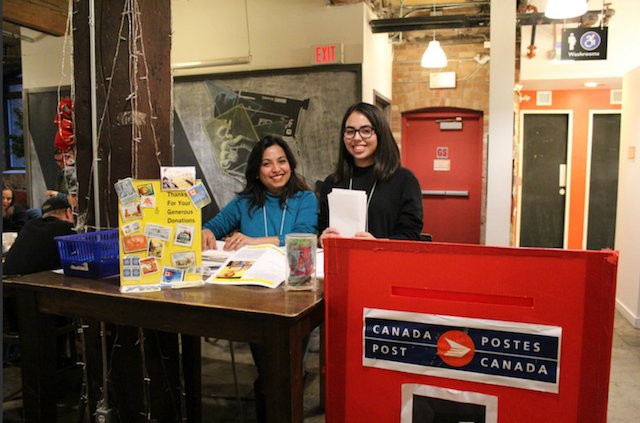 At the children’s table, a young girl colours a picture of the Istanbul 10, human rights defenders who are being prosecuted by the Turkish government for attending a workshop held by human rights organizations. The girl’s mother sits beside her, writing a letter in support of Idil Eser, the director of Amnesty International Turkey who is among three of the Istanbul 10 who has been thrown in prison for unfounded charges of “assisting a terrorist organization.” Writing letters for those fighting for human rights is humbling to say the least.

“It makes you consider how lucky you are,” says Natalie Enriquez-Birch, a fellow youth activist.

Since there are only a handful of youth in the room, I can’t help but notice Claire and Faith, jotting in the corner. Claire is 15 and starting on her seventh letter of the day.

“I encourage my friends to come and they claim it’s a great idea but never really show up. I think if they did, they would enjoy it,” says Claire.

It’s my third year volunteering for Amnesty and though my friends are curious, they seldom accompany me to the event. Still, coming to #WriteForRights often feels like a winter get-together, as you see many of the same faces.

Carol McFarland has been volunteering at the event for 35 years and shares with me why #WriteForRights is her favourite Amnesty event of the year.

Says McFarland, “It gives you a shot in the arm, fresh resolve to continue on with your activism. Because you realize you’re not working alone.”

It’s shortly before the 7 pm deadline when the announcement is made. “We’ve just hit 1,000 letters!” exclaims Doyle. I spot John Alves, a member of Amnesty’s Young Professionals network, writing until the very last minute.

“It’s very easy to forget that peoples’ rights are being taken away in the midst of our own well-being,” he tells me. “Respecting human rights is mandatory to respecting ourselves.”

I nod in agreement, but I can’t help but feel a bit disheartened. How can I get my peers to see the world through a similar lens? 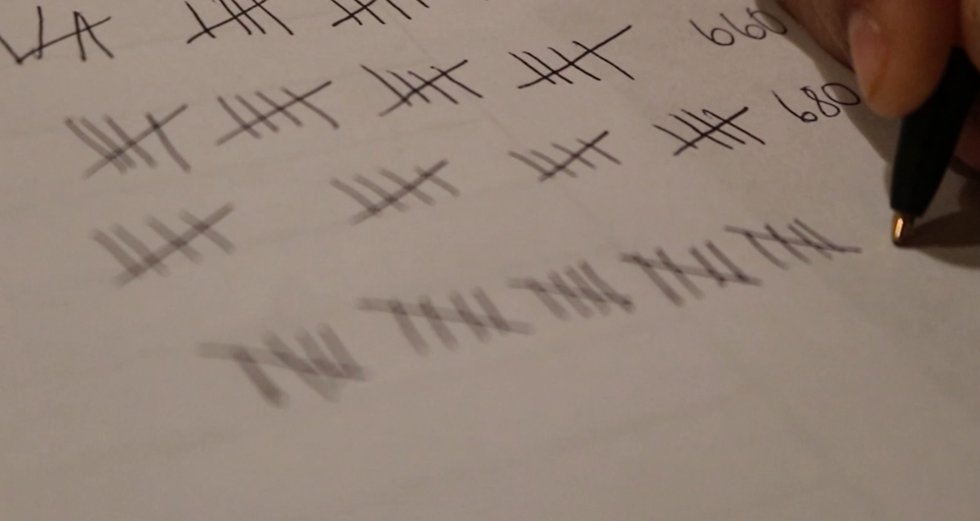 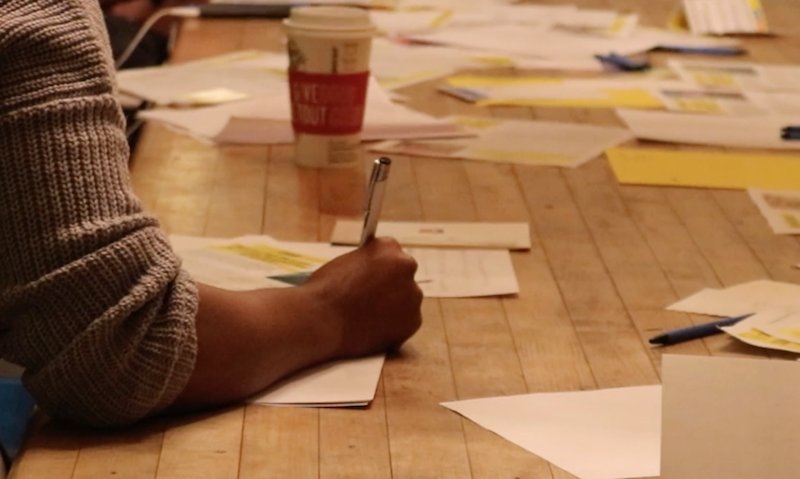 My final interview of the day with Duncan Garrow, vice-chair of Amnesty’s Toronto chapter, puts me at ease.

“The greatest thing about students and younger people is that they believe they can change the world. And there are times when they forget that,” says Garrow.

He says it’s young people who have always been the drivers of positive social change. “Young people inspire the rest of us,” he says.

The day comes to an end and as I step into the chilly winter air, I think of those words and how the most important thing I can do is keep showing up. #WriteForRights reminds me that it’s not too late. We all can play a part in defending human rights and show that the world is watching.