Are pigs people, too?

It’s the question judge in celebrated Pig Save trial refused to answer, calling defence’s attempt to get him to do so a publicity stunt. Another unanswered question: why was Anita Krajnc charged? 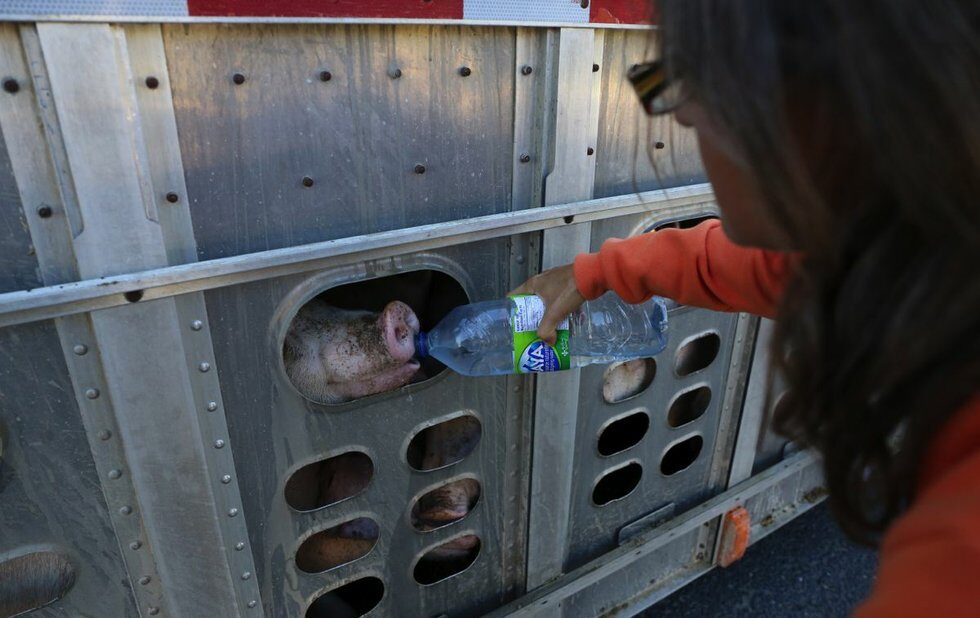 In a verdict hailed by activists as “a victory for animals,” Toronto Pig Save founder Anita Krajnc was acquitted of criminal mischief Thursday, May 4, after being charged for giving water to a pig in a truck on the way to a slaughterhouse.

But for Krajnc’s lawyers and the worldwide Save Movement that the trial has energized, Justice D.A. Harris’s decision, delivered in a Milton court, didn’t go far enough, failing to seriously consider the contention put before the court that pigs are people, too. As such, there’s nothing in the decision, Krajnc’s lawyers say, that will advance the legal rights of animals in the future.

Harris, who noted the public interest in the case, clearly didn’t want to go there, characterizing much of the defence’s legal efforts as a publicity stunt. He referred in his decision to the fact that no spectators or media attended the preliminary hearing into a charge of second-degree murder in the courtroom next door.

“We would be even more pleased if the media and members of the public showed the same level of interest in other cases of interest to the people of Halton,” Harris said.

To be sure, the case, which was covered by media from as far away as Australia and the UK, received attention from some noted personalities. Mckenna Grace, the 10-year-old star of the film Gifted and TV’s Designated Survivor, travelled to Milton on the day of the decision to lead a vigil at Fearmans Pork Inc., the slaughterhouse where a truckload of 190 pigs was headed when Krajnc, in the sweltering heat on June 22, 2015, reached in to give water to a pig.

Harris found that there was no evidence that Krajnc, who was facing a possible six-month prison term and $5,000 fine if convicted, “gave an unknown substance, [a] possible contaminant, to the pig,” as trucker Jeffrey Veldjesgraaf suggested.

The judge noted that Krajnc offered the truck driver the bottle she was using so he could test it for himself. He refused. Harris reasoned that the truck driver would have returned the pigs to the farm if he truly believed they had been “contaminated.” Instead, he drove them straight to the slaughterhouse for processing, informing no one there of any possible tampering.

Defence lawyers Gary Grill and James Silver argued that the judge should not only find Krajnc not guilty, but rule that her actions were legally justified and for the public good.

Her lawyers compared her intervention to those of Hungarians who gave water to Jews being shipped to concentration camps in cattle cars during the Holocaust. The judge said he found that comparison offensive. (Both Grill and Silver are Jewish.)

Harris also rejected the defence’s likening of Krajnc to Nelson Mandela, Mahatma Gandhi and U.S. suffragist Susan B. Anthony, saying he could see no reason for these comparisons except to “look good in social media posts.”

He also dismissed the defence’s argument that pigs should be considered persons under the law.

Lori Marino, an expert in neuroscience and animal behaviour, testified for the defence that pigs have a number of personality traits, form complex social groupings and are similar to dogs in emotional and psychological characteristics.

Marino told the court that “what it means to be a person is not equivalent to being human. A ‘person,’ even under the law, is someone who is autonomous, has the capacity to be self-aware and the ability to understand they have a life. The common law says that practical autonomy is the equivalent of personhood.”

The judge rejected her arguments. He said that by law in Canada, pigs are property. He added that Marino was not qualified to make the statement that the treatment of pigs in factory farms amounts to torture.

Harris did accept the testimony of environmental scientist Tony Weis that factory farming is a prime cause of greenhouse gas emissions and global warming. Weis believes that the growing global population’s continued consumption of meat from factory farms will result in humanity’s inability to feed itself.

Krajnc compared eating meat to smoking cigarettes and claimed that giving bacon to children is a form of child abuse. (The World Health Organization has classified bacon as a type-1 carcinogen.) When asked about that, Jenkins responded, “Well, that’s a nice one. I’ve not heard of that, but I would leave that to all of you to contemplate.”

Harris was “prepared to accept that Ms. Krajnc actually believes everything she says.” However, he added, “it is possible that she is simply making statements that will grab the public attention as controversial sound bites.”

In the end, the judge declined to rule on environmental or animal rights questions, finding simply that Krajnc did not “obstruct, interrupt or interfere with the lawful use, enjoyment or operation of property.”

“It would have taken a really brave, forward-thinking judge to understand the public-interest defence,” says Grill.

Other courts have considered the question.

For example, in July 2015, New York Supreme Court Judge Barbara Jaffe heard a claim of legal personhood made on behalf of two laboratory chimpanzees, Hercules and Leo, by the Nonhuman Rights Project. The chimps were being used for biomedical experiments.

While rejecting a claim of personhood, the judge gave serious consideration to the arguments. She ordered a representative of Stony Brook University, where the chimps were being held, to appear in court and respond to a petition stating that Hercules and Leo were being unlawfully detained and should immediately be moved to a sanctuary in Florida.

Jaffe concluded that “efforts to extend legal rights to chimpanzees are understandable” and that “someday they may even succeed.”

In final arguments, Grill claimed that “the Crown lost sight of what the alleged crime is.” The Crown couldn’t offer a coherent explanation of the charge against Krajnc. So why was Krajnc charged in the first place?

Judge Harris seemed to wonder as much, offering at one point in his decision that prosecuting Krajnc “probably led to enough bad publicity for the pork industry that it might be said that the prosecution actually accomplished what they accused Ms. Krajnc of trying to do.”

Whatever the motive, it backfired. Krajnc continues, with growing numbers of activists, to bear witness outside Fearmans Pork in Burlington.

“I am here, I am present, I am intervening,” says Krajnc.

Animal rights Anita Krajnc Pig Save This week in NOW