An artist profile of Brian Donnelly Describe your process of creating a piece. What materials do you normally work in?I. 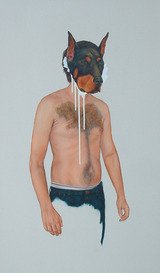 An artist profile of Brian Donnelly

Describe your process of creating a piece. What materials do you normally work in?

I usually start on paper, purely aggressive line drawing to help decide on postures and poses to be photographed. This also helps to layout a piece as far as subject placement/arrangement is concerned. After a photo shoot I begin picking through the images looking for flaws and boil down to about 5 images that are useful, and then begin testing in photoshop. Once it passes the photoshop test, it gets transferred to pencil on canvas and then the painting begins.

What projects are you working on? What do you have coming up, any shows?

At the end of October the April Flores Toy Exhibit, which I contributed to in September on the San Francisco leg of the tour, will travel to the Museum of Sex in New York, and then the Painted Bride in Philadelphia. I’ll also be producing some small work for my dealer in Luxembourg to show at an Art Fair in Brussels coming up in February.

My major focus for the next few months will be a group exhibition this spring curated by Show & Tell Gallery’s Simon Cole at the Spoke Club in Toronto, followed by a solo exhibition with Lebasse Projects in Culver City this June, and then rounding into the fall with another group exhibiton at Show & Tell close to Halloween. These shows will all feature new work, so I have a good deal on my plate at the moment.

When are you most productive?

In the early morning after a shower and a cup of tea. It usually lasts from 8am till noon.

When did creating art become something important in your life?

I did a wicked pencil drawing of Axl Rose when I was in eighth grade, that pretty much sealed the deal.

What are some of your favourite spots in the city? Some favourite places to go, eat, drink, bike ride?

I’m mostly a stay at home, watch movies and order pizza kind of guy, but there are two destinations that I rarely say no to. The first is Tortilla Flats, I always seem to have a good time when I go, and they usually have a great drink special, so what’s not to love? Secondly my favourite place in the city, is filled with flashing lights, incessant beeping and dinging, and kind of smells like urine/failure, but brings me a child-like sense of excitement every time: the arcade at Union Station. Located right next to the Via Rail arrivals gate, this place is one of Toronto’s only venues for pinball, a game that sadly is dying out slowly as home video gaming becomes more popular. They have about seven or eight different tables on site at any given time, and they rotate them out for new ones every two months or so. It also has some other arcade classics hiding in there, and a few new ones, it is well worth it to fill a flask and drop a few bucks playing games that you can’t play at home.

What are you currently obsessed with? Any blogs, pod casts, films, artists?

I wouldn’t say obsessed, but I’ve been frequenting ignoredprayers.com lately, it’s reassuring that someone else will troll the internet and filter out the things that I really need to see. As far as film goes, I’ve always had a thing for Tobe Hooper’s The Texas Chainsaw Massacre, it’s amazing how inventive people get when they don’t have much of a budget to work with, I find myself watching this movie way more often than I would like to admit.

What are your thoughts on the Toronto art scene compared to everywhere else you’ve experienced?

I think it’s a little lazy. If you’re planning on making a career of it, bring your A-game. This excludes nobody.

What is your survival food? Cheap eats for the starving artist?

Before going to any of these locations, make sure you shave off your pointy moustache, and leave your beret at home, you don’t want people to know that you’re living up to the stereotype.

The cheapest pizza I’ve ever ordered that didn’t taste like cardboard was from Pizza Memo. They have two locations, one around Bloor west someplace and another at Queen and Lansdowne. Though I’m more into the one on Bloor, both have ridiculously low prices, last time I ordered it was something like $30 for two 3 topping XLs, with 4 pop and dipping sauce. That’s food for days. I also highly recommend hitting up Mama Martino’s on the Queensway, just west of Parklawn. The Veal and Chicken Parmigiana are both equally delicious and under priced considering the quality. Finally, Bistro 422 on College has to be the best place to consume a dangerous amount of liquor on the cheap, and incidentally, a great place for a first date.