NOW MagazineNewsAt the table with the G20

At the table with the G20

What will it take for Stephen Harper to be a responsible leader during the upcomign G8 and G20 summits in Canada? 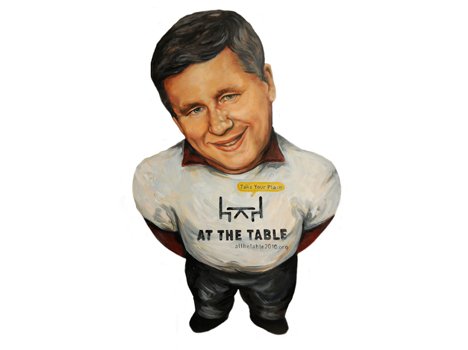 With its home-court advantage, Canada is getting some help from grassroots activists in shaping the agenda for the June G8 and G20 summits.

A new coalition, which surfaced on Monday, has a short three months to push Stephen Harper to come up with solutions around poverty, climate change and global economic reform.

Called At the Table, the confederacy of NGO’s and citizens’ groups across Canada and the world, including Pembina, Oxfam, the Canadian Labour Congress, the G8 2010 Interfaith Partnership, World Wildlife Fund and others chose the Metro Toronto Convention Centre, site of the June world leaders summit as their launch pad.

Expect a flurry of activities over the next few months on many fronts including kitchen table summits in citizens’ homes (they’re encouraged to hold a seat for their MP), concerts, student gatherings, town hall meetings and online petitions. The coalition will host a Global Day of Action June 16.

There are still no confirmed plans for the June 26 main event itself, when leaders are cloistered around the Convention Centre and the downtown core is on lockdown.

Much of the work, says Make Poverty History’s Gerry Barr, needs to be done before leaders arrive, “when there’s still an influence on the final outcome.”

Lewis points out that, “The one leader who is out of step is the Canadian leader.”

Last week’s budget freeze of international aid payments through 2014 will put Canada near the bottom of the list among developed countries, he says. Canada is already ranked pretty low. In 2008 0.32% of Canada’s gross national income went towards international aid-well below the 0.47% average.

“The feds decision suggests Canada has no stake on the moral high ground,” Lewis says. “The reversal in the budget is a reversal in our claim to leadership,” and could be “fatal” for the feds desire to join the security council.

As well, he points out that Canada is also “the only country in the G8 unwilling to embrace the financial transaction levy”, the Tobin tax, which aims to stabilize exchange rates by shaving a percentage off quick international transactions. The proposal is now popular in development circles as a possible way of funding global aid initiatives.

Huntsville will host the G8 summit starting June 25, immediately followed by the G20 summit in Toronto from June 26-27.

For other protest updates visit the Resist Toronto website.[rssbreak]