NOW MagazineNewsBailao: “I intend to plead not guilty”

Bailao: “I intend to plead not guilty” 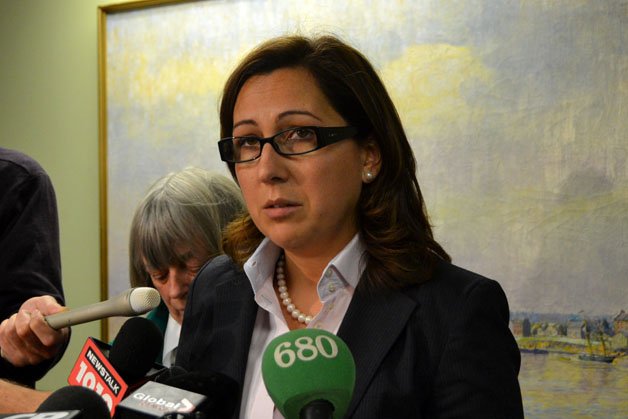 Flanked by councillors Pam McConnell and Frances Nunziata in the City Hall press gallery, an emotional Bailao delivered a brief statement, in which she said she plans to fight the charges.

“I want to be absolutely clear. These charges will in no way affect my ability to do the job I was elected to do,” she said, appearing to hold back tears. “I intend to plead not guilty. I assure you that I am taking these charges very seriously, and I will continue to cooperate with the legal process.”

Bailao, councillor for Ward 18, also thanked friends, family, and constituents who have shown her support in the past 24 hours.

“I am confident I will be able to demonstrate their faith in me is not misplaced,” she said.

According to media reports, Bailao was stopped on Bathurst near Harbord at 1:43 am Tuesday, after attending the Mayor’s Ball for the Arts earlier the evening. The event ended around 10:00 pm.

On Wednesday the councillor refused to answer questions about where she was during the intervening hours, or how many drinks she had before she got behind the wheel. She said she couldn’t comment because her case is still before the courts, but indicated this is her first such run in with the law, saying “I’ve never been through anything even remotely similar.”

Since news of the charges broke yesterday, Bailao, a centrist on council, has enjoyed an outpouring of support from her colleagues across the political spectrum. Her appearance Wednesday was coordinated with the help of the mayor’s press secretary, and a handful of councillors, including Doug Ford, Mike Layton, Josh Colle, Josh Matlow, Paula Fletcher, and Denzil Minnan-Wong were on hand for the event.

Several spoke glowingly of Bailao after she made a hasty exit through the back door of the press gallery.

“We’ve all had a bad night,” Councillor Ford told reporters. “She had a bad night. She regrets it, she apologizes, and I think it’s time to move on now. I guess it’s in the hands of the courts.”

“Certainly, Councillor Bailao is an exemplary councillor and even better person,” said Councillor Colle. “I’m not familiar with the incidents of the evening, but I’m sure she’s going through a tough patch.”

Asked why, in light of the seriousness of the charges, so many councillors have leapt to her defense, Colle said that Bailao has yet to be found guilty and that there is a degree of solidarity among elected officials whose every action can be subject to the media spotlight.

“I think there’s a sense that, because [of] the public scrutiny we all find ourselves under regardless of whether you made a mistake or not, it’s going to be a tough stretch for her,” Colle said. “And so you want to support a colleague through that.”

But Carolyn Swinson, a spokesperson for Mothers Against Drunk Driving Canada, says that terms like “mistake” and “bad night” are exactly the kind of language her organization has tried to eradicate from discussions about impaired driving and she’s disappointed to see public officials using them to describe Bailao’s alleged offense.

“It’s absolutely unacceptable,” Swinson says. “It makes it looks as though an impaired driving charge is a minor thing, and it’s not. It’s a criminal offence, it’s not a minor traffic incident.”

Swinson says that four people are killed by drunk driving in Canada every day, and that in a city like Toronto there’s no excuse not to take alternate transit home after a night out.

“If you drink and get behind the wheel of a car, it’s not a mistake. If you leave your purse at home, that might be a mistake,” she said.

Good morning. I know many of you have questions about the recent charges, and I would like to take this opportunity to make a personal statement.

I want to be absolutely clear. These charges will in no way affect my ability to do the job I was elected to do.

I intend to plead not guilty. I assure you that I am taking these charges very seriously, and I will continue to cooperate with the legal process.

As you can appreciate, this is still being investigated and is before the courts. There is a process to be followed, and out of respect for that process my lawyer has advised me not to comment.

I also want to take this opportunity to thank all of my constituents, colleagues, and – thank you, many of them are here now – family and friends who have called, emailed, to show their support for me.

I am confident I will be able to demonstrate their faith in me is not misplaced.

I will continue to focus on my work to improve public housing, create a world class transit system, and be a strong, strong voice for the interests of Ward 18 residents.