Nature therapy is an under-emphasized aspect of modern psychiatry, but new studies suggest even mild increases in exposure to trees can result in lower levels of depression 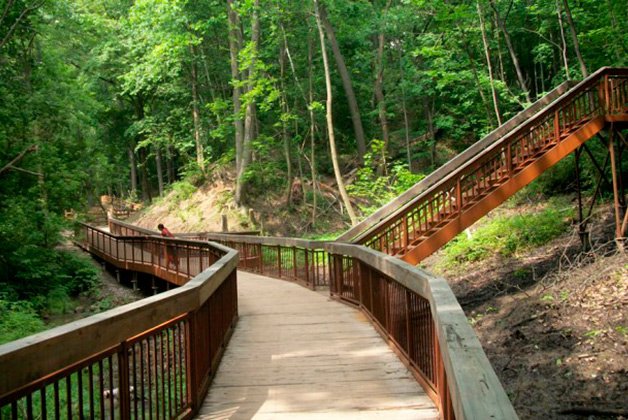 As someone who has been living with a rather gnarly case of obsessive-compulsive disorder for part of my adult life, I know what it’s like to be alone, scared and turning to CAMH’s emergency room for help.

It turns out that living in a major city like Toronto can be more harmful to your mental health than researchers first thought.

A 2015 Stanford study mapped the brain activity of participants who walked for 90 minutes through an urban setting and compared it to those who walked for 90 minutes through grassland covered with trees and vegetation. Those who walked in nature showed significantly lower activity in the subgenual prefrontal cortex. This area of the brain is closely associated with rumination – cyclical thoughts that don’t go anywhere in our brains and are a key contributor to depression and anxiety.

Mental health expert (and my personal butt-kicker) Amanda Guthrie of the START Clinic says “Rumination is our brain’s attempt to problem solve to get out of feeling bad. But when it is an emotional problem [we’re dealing with] rumination doesn’t work, it doesn’t fix the problem, so we end up just spinning our wheels.”

Studies dating back to the 1930s have shown a higher incidence of mental illness in cities compared to rural areas. Some have theorized that the increased rates are a result of sociological factors. Newer studies suggest that the physical urban environment has a direct impact on our brain activity.

According to the Stanford study, people living in urban centres are at risk for spending a greater amount of time in this cognitive trap.

But the good news is that even mild increases in exposure to nature can result in better mental and physical health, including variables like the number of trees on your block. And Toronto is a fairly decent city to live in in this regard.

In 2015, a team of researchers studied the impact of tree cover on Toronto residents’ mental and physical well-being. The researchers found that areas with more trees showed lower rates of depression and better physical health.

Last year, researchers out of the University of Queensland in Australia were able to demonstrate that just one 30-minute trip to a park was enough to lower depression.

Toronto makes it easy to visit a park. If there aren’t any parks or green spaces near you, a free shuttle bus can take you where your need to go.

In 2010, a group of outdoor enthusiasts created Parkbus, an initiative focused on increasing accessibility to nature. Their free shuttles run from 30 Carlton to Rouge Park and numerous other nature-filled destinations.

But despite the low cost of nature therapy, it is an under-emphasized aspect of modern psychiatry. This might be part of a long-running trend in the profession, according to Robert Whitley of the Social Psychiatry Research and Interest Group in Montreal.

The biological components of psychiatry can’t be ignored, but rather professionals should give equal attention to all three components of the model.

“I’m definitely not saying people shouldn’t take their medication and go sit in a beautiful garden all day,” says Whitley.

It might seem that time, however, is the biggest factor preventing more people from increasing their exposure to nature.

Raja Raudsepp, an environmental educator with the Toronto and Region Conservation Authority, says giving yourself a simple goal, is a good way to start. For her, the activity of choice is birding at Tommy Thompson Park.

“Getting into birding is a great way to move your mind’s focus from something internal that may cause you stress to something outside of yourself in nature that you can connect with and that may relax you,” she says.

Nature is a medication with few negative side effects (bears), but the best part is you don’t need anyone to prescribe it for you.