The Bieber of Buddhism comes to Parkdale

I was looking forward to Tibetan religious leader Ogyen Trinley Dorje's Toronto visit, but the reverence and awe that many in my community feel for such figures leaves little room for frank discussion 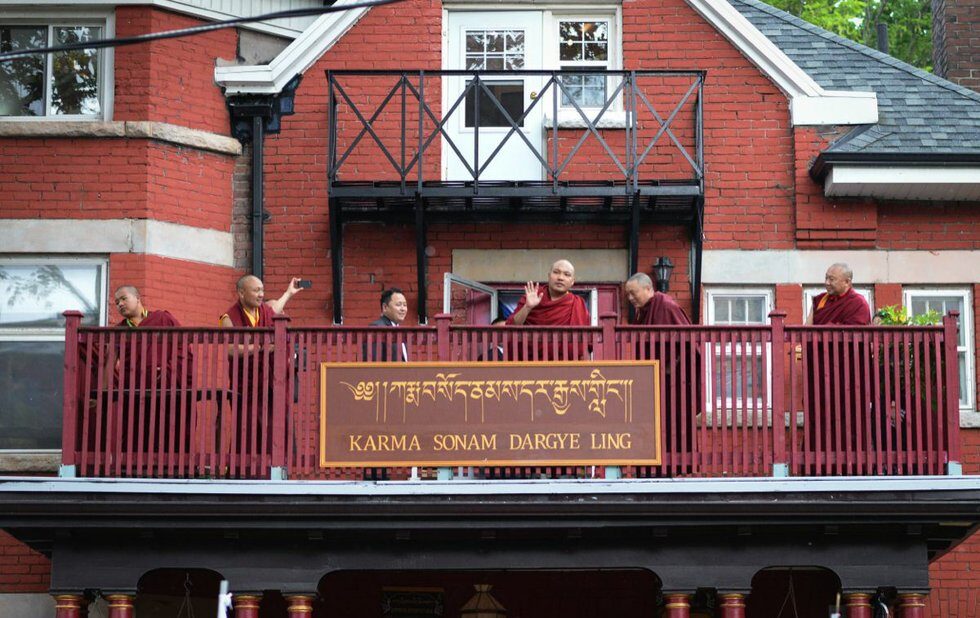 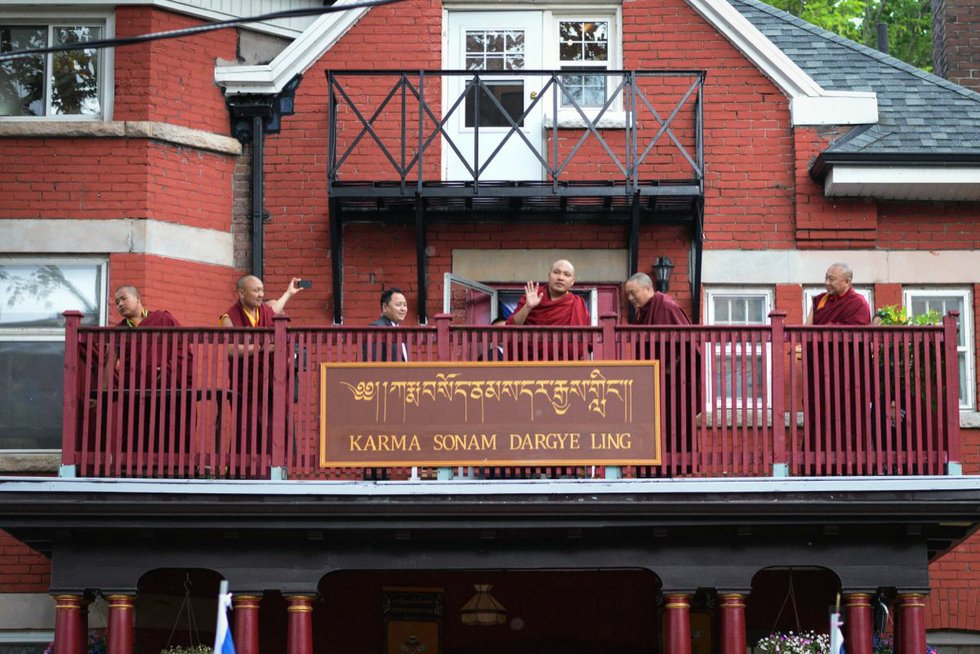 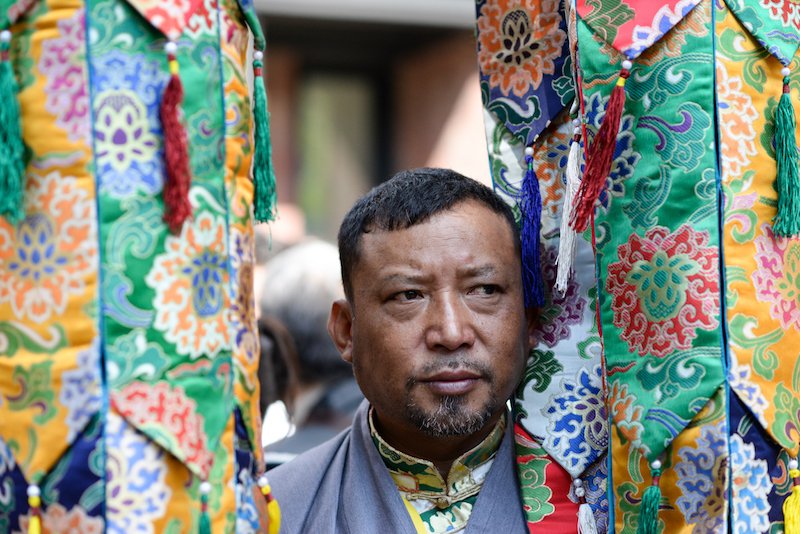 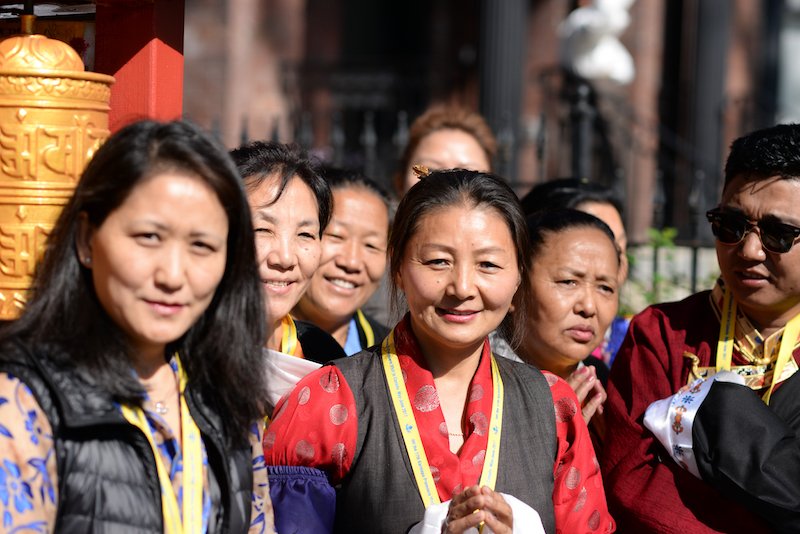 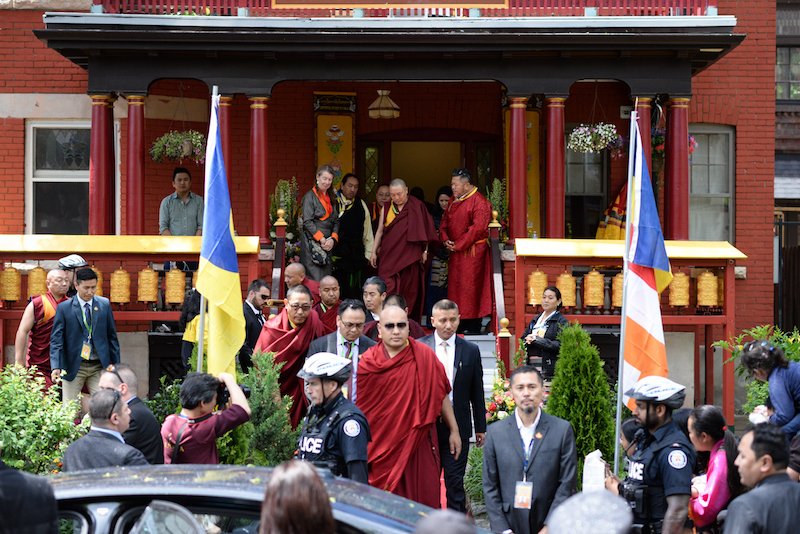 The 17th Karmapa, Tibetan religious leader Ogyen Trinley Dorje, was in Parkdale Wednesday, May 31, to consecrate the newly relocated Karma Sonam Dargye Ling temple. It was the first time the 32-year-old protege of the Dalai Lama has visited Canada.

His inaugural visit to his temple was a pretty big deal, and local Tibetans observed all manner of traditional practices and rituals to mark this auspicious occasion. On the morning of his arrival, the space inside and around the temple was a colourful blur of bodies, dresses and flags.

Police officers, volunteers, temple staff and devotees gathered outside, some as early as 6 am, to await the Karmapa’s appearance, scheduled for 9:30 am.

The diverse crowd included Charlotte, 73, who’d driven from Peterborough the night before George, 28, a British-born resident of the Junction Taiwanese nuns Miao Jing and Miao Yin two fervent Chinese vegetarians originally from Shanghai, and of course lots of Tibetans.

The mood was a mix of nervousness and bliss. Some worried they wouldn’t catch a glimpse of the Karmapa.

Jamyang, a 45-year-old Tibetan from India, says he’s been a devoted follower since the Karmapa was a child. “Even though my family’s Buddhist tradition is different, I was drawn to him ever since I saw his face,” he explains. “It came natural to me.”

Many older people reminisced about the previous Karmapa, Rangjung Rigpe Dorje, who died in 1981. A revered figure, he was one of the more prominent Tibetan masters to introduce their tradition to the West in the 70s. They spoke glowingly about how the present Karmapa carries on his lineage.

A brief commotion ensued when the Karmapa finally arrived. A procession of monks and a dancing yak and snow lion welcomed the Karmapa as he stepped out of his car, flanked by private security and Toronto police. He slowly made his way to the temple, touching the heads of some of the more determined believers.

Upstairs, he held a private audience with a select group of temple board members and organizers of his tour. He had a packed schedule of  four days of events ahead of him in Toronto, including a public talk at Convocation Hall later that afternoon, before continuing on to Calgary and Vancouver.

Some of the crowd dispersed after he went inside, while others moved to the back of the temple for tea and treats prepared by volunteers.

Buddhism first arrived in the Tibetan plateau in the 5th century AD in the form of scriptures from India and became established as the state religion in the 7th century. From there, it branched off into four main sects or schools: Gelug, Kagyu, Nyingma and Sakya.

The Dalai Lama is widely respected as the overall head of Tibetan Buddhism his is part of the Gelug school. The Karmapa leads the Kagyu sect.

Today more than 80 per cent of Tibetans practise some form of Buddhism. Millions of non-Tibetans around the world also consider themselves students and devotees.

When Ogyen Trinley Dorje was recognized as the 17th Karmapa in Tibet in 1992, it was the Dalai Lama who gave the all-important seal of approval, taking the young man under his wing after he fled Tibet at the age of 14. Many Tibetans now consider him the next in line to the Dalai Lama, even though they represent different Buddhist traditions.

They have a deep bond.

I was looking forward to the Karmapa’s visit when I first heard about it. Even though I’ve grown a bit weary of the influence that Buddhism has over my community, I’ve come to accept it as a part of my Tibetan identity.

This interplay between ambivalence and pride in our culture is common for the younger generation in the Tibetan diaspora. Whether you’re Tibetan, Chinese, Somali or Thai, Muslim, Catholic, Sikh or Jewish, you’re often caught in the struggle between wanting to break free of the confines of your faith and resisting erasure by the dominant culture.

The Karmapa’s tour offered an opportunity for me to try to disentangle some of these thorny issues. There were questions I hoped to ask him about the overwhelming patriarchy of religions, including Tibetan Buddhism. How does the Karmapa, who professes to support feminism and has pushed for formal ordination of nuns, reconcile that with the fact that none of his previous incarnations or teachers are female?

The virtues of compassion, non-violence and mindfulness were extolled breathlessly throughout his tour. At his public talk at Convocation Hall, entitled Mindfulness And Environmental Responsibility, I asked him how we are supposed to practise mindfulness when confronted with a hostile situation, like when two volunteers threatened to have me removed from the temple because I was not carrying a press pass. (I had a VIP pass). He replied by stressing the need to be cautious about the desire to accomplish too many things all the time, advising we take a “playful” attitude toward mindfulness.

I left the talk disappointed.

The reverence and awe that many from my community feel for figures like him leaves little room for frank discussion between regular Tibetans and their Buddhist leaders. Uncritical devotion often reduces them to inert idols. Even those outside Tibetan or Buddhist communities engage in this kind of worship. When the Karmapa visited the United States in 2015, the New Yorker published an essay titled The Bieber Of Buddhism.

Toward the end of his visit in Parkdale, the young Karmapa emerged from the upper balcony of the temple and waved at the crowd who had stood in the sun (and rain) for a glimpse. He then descended to the waiting motorcade and was quickly whisked away.

As I walked down the street, a group of bemused people on the front porch of a building two doors up from the new temple discussed the scene they’d just witnessed.

Steven, who lives in the building and described himself as “just a Parkdale bum from eastern Europe,” shrugged. “They basically converted rooming apartments for poor people into a temple,” he said.