Toronto's bike share program has secured a new corporate sponsorship that will put it on solid financial footing for the. 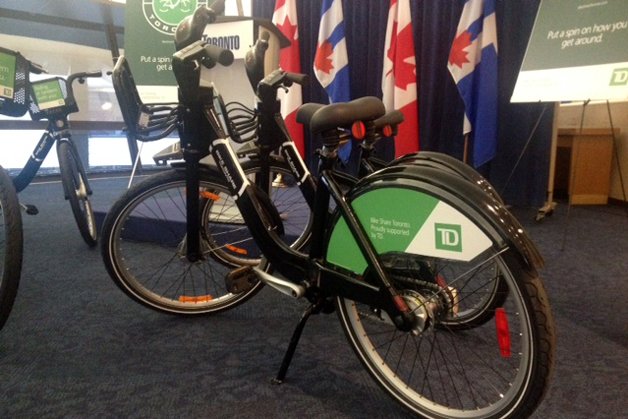 Toronto’s bike share program has secured a new corporate sponsorship that will put it on solid financial footing for the next two years.

In an agreement announced Tuesday, TD Bank will pay to become the marquee sponsor of Bike Share Toronto, earning the financial institution the right to put its brand on the agency’s 900 vehicles.

At a press conference at City Hall, Mayor John Tory said the sponsorship means that Torontonians “can rest assured that the bike share program they’ve come to love is here to stay.”

“Great cities have an integrated transportation system that includes cycling. And Toronto should be no different,” he said.

“Thanks to the sponsorship of TD, we will make Bike Share Toronto a truly world class program. A program that is financially viable without being a burden on the taxpayers of Toronto.”

The sponsorship deal is the latest change to affect the management of Toronto’s bike share system, which was first launched by the Bixi company in 2011. Although it has always been popular, by last year it was clear Bixi would be unable to repay its $4.5-million starter loan, and in April, the city took over the agency, handed control of it to the Toronto Parking Authority, and changed its name to Bike Share Toronto.

TPA president Lorne Persiko said he was prohibited by the terms of the deal from revealing how much TD will pay for the sponsorship. But he said the amount will more than cover the annual fee the TPA pays a private company to run the system, as well as additional administrative costs. The operating fee is $650,000, meaning that over its two-year term the deal will be worth at least $1.3 million. For the first time since the bike share program launched, it will be in a position to turn at least a modest profit.

Only a portion of the sponsorship money will go towards expanding Bike Share, however, which the system’s advocates say is essential to its long term viability. Bike Share currently has 80 stations, most limited to the downtown area bounded by Parliament, Bloor, Bathurst, and the lakeshore, but it’s believed there is significant demand outside the core.

The TPA already has some expansion plans in the works, however. Prior to inking the sponsorship deal, the TPA announced it would install 20 new stations next year. Persiko said Tuesday they would mainly service Pan Am Games sites.

Several councillors have also allocated Section 37 funds from new development projects to add stations in their wards. Ward 27 councillor Kristyn Wong-Tam has earmarked $1.1 million for 22 stations, while Joe Mihevc is hoping to add six in Ward 21, which would bring Bike Share north of Bloor.

But Persiko said new stations funded by Section 37 money won’t be installed until 2016.The TPA doesn’t want to rush expansion because the agency has had trouble finding a reliable supplier in what is still a fledgling industry. Bike share systems across North America faced a critical parts shortage this year after Montreal’s Public Bike System Company declared bankruptcy.

“We need a supplier we feel comfortable buying from. It’s just like the beginning of cellphones. We don’t want to invest in something that’s going to change next year,” Persiko said.

But the head of bike advocacy group Cycle Toronto said that if Bike Share is going to fulfil its potential, it needs to get bigger soon.

“Montreal’s got over 400 stations, New York’s got over 300 stations. We’ve got 80,” said Jared Kolb. “We have a long way to go before we’re going to be a world class bike share system in this city.”

While he welcomed the sponsorship deal, Kolb said that as an element of Toronto’s public transit system, Bike Share’s survival shouldn’t depend on it turning a profit.

“This is a public good that ultimately services people for trips that are too long to walk, too short for transit. It creates options. As such this system doesn’t need to make money.”