It’s an exciting time to be a map nerd 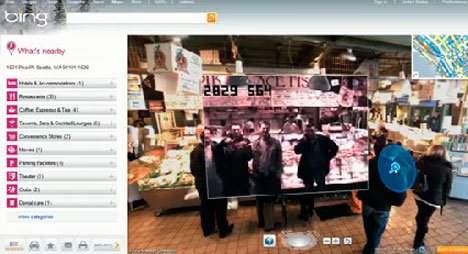 Instead of listening to the radio while I do chores around the house, I listen to TED talks. TED is the annual conference in Long Beach culling an array of great minds. TED is often the first stage where new innovations are introduced and the organizers often post their talks online soon after they are staged live. It’s the kind of mental nourishment I can really dive into on any lazy Sunday.

TED2010 just wrapped up this weekend, but already talks were being posted online. This Sunday, though, TED uploaded a 10-minute presentation I had to see to appreciate. Microsoft’s Blaise Agüera y Arcas, the architect of Bing Maps, unveiled some new tech tweaks to its Bing Maps called Streetside Photos. It was cool stuff – Arcas zoomed us around to a Seattle fish market, going curb-side a la Google Street View. But this iteration of online mapping also incorporates 3-D modeling, Flickr photos and live video. Take that, Google.

Most intriguing was how Bing Maps can take panoramic views indoors. Arcas arched the camera inside the fish market to show off how we not just only view landmarks, but get under their roofs. Next, he demonstrated how he could pull up real-time video from the market through something called Video Overlay Technology this places the video feed over the static picture, allowing Arcas’ Microsoft friends to wave hi to us live.

Arcas wasn’t done drawing gasps from the audience. Next he played with a feature on Maps that datamines geo-tagged Creative Commons photos on Flickr, stiching them into the Streetside imagery. In a sense, multiple photos of the same site can be layered to view a location over time.

Finally, he pointed the camera skyward to show us constellations and a close-up view of the moon, thanks to Microsoft’s World Wide Telescope (yet to be launched to the public).

While Streetside Photos is only available for Seattle, San Francisco and Vancouver right now, you can only imagine the potential for Microsoft’s online topography to include augmented reality features. It’s an exciting time to be a map nerd, and looks like Microsoft and Google will be battling ferociously for our attention in this realm.[rssbreak]