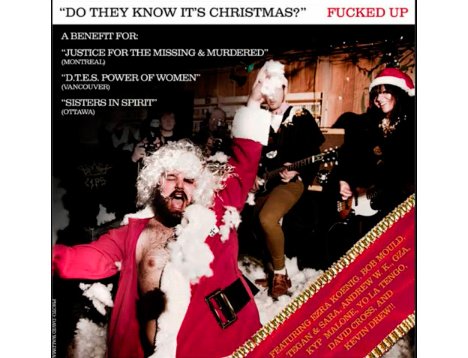 You probably thought Bob Dylan’s Christmas album would be the weirdest seasonal recording of the year, but it looks like he’s got some competition after all. In Dylan’s case, pretty much everyone agreed that it was a bewilderingly bad concept (except for maybe this reviewer). Luckily, we’ve come across a couple surreal holiday tunes that are actually worth checking out.

FUCKED UP Do They Know It’s Christmas? (Matador)

When Toronto hardcore punk band Fucked Up surprised much of Canada by winning the Polaris Music Prize, they pledged that they’d use the $20 000 prize to record a star-studded benefit single to raise funds and awareness for the hundreds of aboriginal women who’ve gone missing in Canada.

While they didn’t get all the celebrities they were hoping for, they did manage to pull together a pretty impressive roster for their tongue-in-cheek cover, including comedian David Cross, indie pop stars Tegan & Sara, Vampire Weekend, Yo La Tengo, Bob Mould (of Husker Du), TV on the Radio, and Broken Social Scene, as well as hip-hop icon GZA (of the Wu Tang Clan).

This version can be purchased right now from iTunes, and all proceeds go to Justice For Missing And Murdered Indigenous Women, DTES Power Of Women Group, and Sisters In Spirit. There will also be a 7″ single version released in the new year, which should have even more special guests (some celebs couldn’t get their shit together in time to make it onto the digital version in time for Christmas).

Now we can pretty much all agree that the original song is a bit tacky, and reeks of neo-colonial paternalism towards the third world, but it’s also really fucking catchy. As frontman Damian Abraham told the National recently (who had to refer to them as F’ed Up), they’re very aware of the questionable politics of the original, and approached the whole thing with a bit of sensitive irony.

“What we’re talking about here is a product of colonialism: the treatment of aboriginal people, and in this case, aboriginal women.”

The verdict? It can’t help but come across as a bit of a novelty song, but surprisingly the band play it fairly straight. No double-time drums, not a lot of screaming, and the joke factor is actually quite low. Hell, if you didn’t know it was from a punk band called Fucked Up, you could mistake it for a completely reverential cover. Yes, we hate Fucked Up for getting this song stuck in our head once again, but since it actually sounds inexplicably good, we’ll forgive them.

We knew that Hans-Peter Lindstrøm liked epic cosmic disco songs. His debut full length album Where You Go I Go Too was only three songs, all of them between half an hour and ten minutes long. So it wasn’t a huge surprise when he announced that he would be recording a 40 minute version of Little Drummer Boy, currently only available through Rough Trade’s Album Club. There is a free five minute edit available for download (listen here

), but it doesn’t come close to the improbable magic of the full-length monster. If you have a soft spot in your heart for early electronic music like Tangerine Dream and Kraftwerk’s Autobahn, you’ll find lots to love here. It probably helps if you smoke weed too. When the gurgles and bleeps finally build up to that massive fuzzed-out Spiritualized-influenced bass line at the ending, make sure your head doesn’t explode. Twisted genius, and much better than it should be.

Should you not feel like signing up for the Album Club just to get your hands on this, you can always wait until January 19, when you’ll be able to get it as a bonus disc with Real Life Is No Cool, his upcoming collaboration with vocalist Christabelle. Unlike his work in recent years, this album is much more concise, and driven by vocals and strong pop melodies. It features a sort of Thriller-era Quincy Jones vibe, and it may just be the best thing he’s ever done. Go to your local indie record shop and reserve a copy today.

Buy the album Real Life Is No Cool here: