Appreciating the better way requires imagining where we'd be without it. How else to get across the city for $2.75. 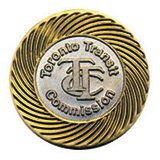 Appreciating the better way requires imagining where we’d be without it. How else to get across the city for $2.75 after finishing up at that after-after-hours basement bar?

There are downsides, of course – like being on the bus with the dude coming back from the after-after-hours bar. But if you’re depressed about our system, take a trip to Mississauga.

Slagging transit is easy. Doing without it isn’t. (I don’t care how long it takes, if it’s -30 Celsius, I’m cheering for that bus). So why not work to improve it? That’s the kind of thinking that leads to transit camps and homemade route map mashups. And the best news: the TTC now figures that public engagement is in its best interests and has put out a welcome mat for the DIY crowd.

Just another pro to a system that, at its best, gets you places fast, cheap and green and even at its worst still stirs up those quirky childhood memories.

Advantages: No better way to take in the city than the Queen car, but transit rocks no matter what route you’re on. Plus, public transit lets you cover the greatest distance with the least financial (and physical) input.

Disadvantages: Nothing sucks more then being stuck waiting for a streetcar or bus in bad weather (though with GPS tracking you’ll soon know when that next bus will appear). Inhaling other people’s ripening BO and having their elbows and sneezes all up in your face also detract from the experience.

Eco Footprint: Anyone who’s biked behind a bus knows transit isn’t as clean ‘n’ green as it’s made out to be. If we’re talking smog, streetcars and subways win over buses hands down. Still, where a compact car emits 214 grams of CO2 per passenger kilometre, a half-full diesel bus only emits 56, and a totally full subway just eight.

Body Boost: Except for hiking up the stairs from the subway platform, your cardio exertion is minimal.

Retail Tip: Get the most rides for your buck with a Metropass. Load up your purse/gym bag with a decent book – and some mints – you know, for crushingly close encounters.