Can the TTC be saved from pandemic devastation?

Without the necessary investments, Toronto could see transit ridership fall irretrievably and the TTC become a diminishing service for people with no other option 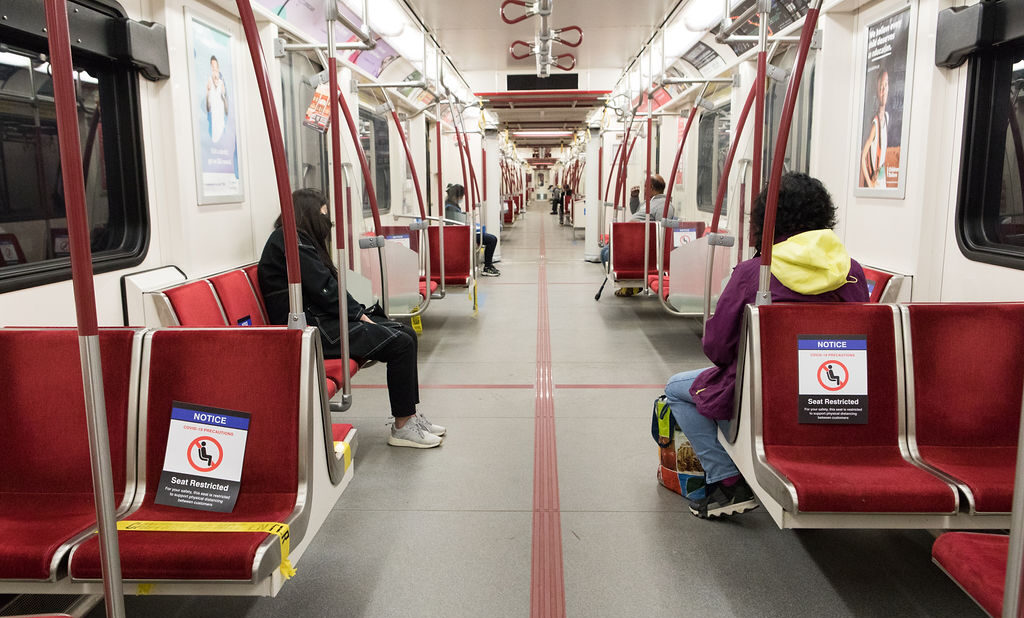 Toronto Transit Commission (TTC) employees who have not yet done so will have to share their vaccination status with the public transit agency by tomorrow or be placed on unpaid leave.

Some 88 per cent of the agency’s 15,090 employees have shared their COVID-19 vaccination status, with “the vast majority” already fully vaccinated, according to the TTC. All TTC employees have until December 30 to disclose their vaccination status or risk being let go permanently. It’s unclear how many employees the mandate affects. The TTC is not offering specifics on that. But the number is in the hundreds, perhaps the thousands.

The situation has led to a shortage of staff, which has necessitated service cuts on a number of routes, the TTC says. Riders taking the Bloor subway and some 57 bus routes will notice reduced service starting on Monday, November 22.

The TTC says the reductions in service, which were quietly announced in a service update on its website earlier this week, are temporary until the transit agency can sort out operational issues. Hiring is being fast-tracked and retired employees are being recruited as part of an effort to fill the service gap.

But for the TTC, it’s another turn for a system that has been devastated by the pandemic.

The Eglinton Crosstown will be nearing completion next year and plans for the Ontario Line are full-steam ahead, but it’s hard to escape the feeling that we’re watching a train wreck in slo-mo as the pandemic continues to wreak havoc on public transit numbers in Toronto.

While the pandemic is slowly fading in the rearview, TTC ridership has stalled at 50 per cent of pre-pandemic levels. Whether public transit use in the city will ever return to pre-pandemic levels anytime soon is increasingly becoming an open question. It seems strange to contemplate given the TTC was operating at over-capacity before the pandemic.

But the Toronto and Region Board of Trade reported last week that office towers in the financial district remain a dead zone, with the volume of weekday workers down by 77 per cent compared to pre-pandemic levels.

The numbers are a little more encouraging outside the core. There, the volume of weekday workers is down by 34 per cent compared to pre-pandemic levels, which is still a significant number.

Some economists are optimistic, predicting that office vacancy numbers will return to normal (or some facsimile thereof) by the second half of 2022. But even they acknowledge that those numbers will be closer to 80 per cent of pre-pandemic levels.

Most of the jobs are back, but remote work is changing the calculus in ways that the TTC may not have anticipated.

There are many reasons why ridership is stagnating. More folks who were taking transit have jumped in their cars to get where they’re going. Shorter trips downtown that used to be taken by transit are being sucked up by ride-hailing services.

But the TTC is not entirely blameless. Lack of enforcement of mask mandates on vehicles has scared a lot of riders off who were choosing transit but now feel unsafe using it.

To add to the stress for the TTC, emergency funding from the feds and province to help ride out the pandemic will soon run out, which means a service that already relies heavily on the farebox for some 60 per cent its operating revenue will be facing even more difficult financial choices.

Other jurisdictions in North America are introducing incentives to attract transit riders back. This week, Boston announced free fares on its busiest bus routes following the lead of Los Angeles, which is making fares free for the working poor, as well as high school and college students. Boston, along with New York City, are also installing priority bus lanes. In Washington DC, frequency of service is being increased.

Similar moves were recommended in the summer by transit activists here when TTC ridership was at 30 per cent of pre-pandemic levels and the prospects of a rebound looked dire as lockdowns lifted.

Transit advocacy group TTCriders released a report in June making a number of recommendations aimed at attracting riders back. Those include lower fares for the working poor and free transit for high school students and people receiving social assistance.

TTCriders notes that, at $123.50, Toronto’s monthly transit pass for low-income people receiving OW, ODSP or a child care subsidy remains more expensive than regular monthly transit passes in most Canadian cities. The group is also calling for free transfers between the TTC and other transit agencies and an expansion of the two-hour fare window.

But the TTC remains in a holding pattern with its five-year fare restructuring plan still in the works.

Councillor Shelley Carroll, who sits on the TTC board, is one who would like to see the TTC’s fare structure “incentivized” now before the TTC loses the emergency funding from the province and feds that has allowed it to run at full capacity more or less throughout the pandemic. Discussions on how much longer that funding will continue are ongoing, a TTC spokesperson tells NOW.

But as Carroll noted in a recent discussion on the future of the TTC on TVO, prioritizing transit over cars and other modes of transportation with things like dedicated bus lanes will be just as big a priority as fares.

Either way, without the necessary investments now, Toronto could see transit ridership fall irretrievably for years and the TTC risk becoming what critics have long feared: a diminishing service for people who have no other option.

One response to “Can the TTC be saved from pandemic devastation?”