How can I in good conscience participate in a celebration in the face of the continued denial of their treaty claims and basic human rights? 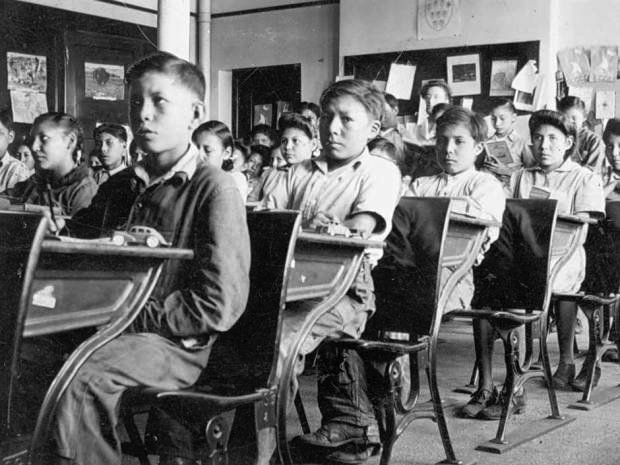 When I was in Grade 1, the entire country was celebrating 100 years of Confederation. Every school child was given a commemorative coin minted for the centennial.

School choirs perfected Bobby Gimby’s Canada, or The Centennial Song, to mark Canada’s 100th birthday and Expo 67, the World’s Fair held in Montreal, which continued on as Man And His World until 1984.

We also memorized the words to the Canadian version of This Land Is Your Land, which was originally a protest song written by American folksinger Woody Guthrie. And, of course, we were still singing O Canada and God Save The Queen.

In 2017, Canadians are embarking on another big birthday bash celebrating Canada 150. The official government of Canada website encourages Canadians to “celebrate all that makes us who we are as a country.”

After 150 years, Canada still sees itself as a beacon of decency. Is it?

Looking back to my school days, I don’t remember learning much about First Nation, Inuit or Metis people. I learned nothing about treaties or residential schools. I didn’t realize until later that at least four children I went to school with and called friends were taken from their families as part of the 60s Scoop.

In my 20s, I apprenticed under a chef who had been removed from his birth family and only found his family of origin in his 40s. My friend was grateful for everything his adoptive parents had done for him, but he had lost his connection to the land, his culture, his history and his spirituality. That was the intent.

How can I in good conscience participate in a celebration in the face of the continued denial of their treaty claims and basic human rights?

Stephen Paquette, a member of the Anishinaabe from Wikwemikong First Nation on Manitoulin Island, regularly meets with non-Indigenous individuals and groups to encourage truth and reconciliation between Aboriginal founding nations and Canadians. He’s co-chair of the Halton District School Board’s Indigenous Education Advisory Council. He sat on the Toronto Police Service’s Aboriginal Consultative Committee for 13 years.

In December, Paquette wrote to the prime minister and Ontario premier Kathleen Wynne, among others, on the language used by various levels of government to mark Canada 150 events.

In his letter, Paquette requests the word “celebrating” be replaced by the word “acknowledging.” He heard back from Wynne, but it was just to say that she has passed his letter along to David Zimmerman, Minister of Indigenous Relations and Reconciliation.

“As an individual who goes into the school system on a regular basis to educate students and teachers about the realities of Canada’s last 150 years,” Paquette wrote, “it would be both an injustice and an insult to all First Nations, Metis and Inuit peoples to suggest that we should ‘celebrate’ the last 150 years of Canada’s history.”

Paquette’s letter echoes the sage words of Justice Murray Sinclair, chair of the Truth and Reconciliation Commission, on behalf of residential school survivors.

“While there are most certainly many memorable moments in our Canadian history, ours is also a history of imperialism, colonialism and cultural superiority,” Paquette writes.

Canadians tend to overlook the fact that this country was born out of treaties with Indigenous peoples. These treaties are legally binding agreements. It’s because the Canadian government has failed to live up to the commitments in these original covenants that we find ourselves faced with a dark legacy in respect to Indigenous peoples.

These broken promises have resulted in armed land claim conflicts. They are the root cause of the maltreatment of children living on reserves who have no access to services that are available to every other child living in Canada. They are part of the reason that the federal government has embarked on an inquiry into this country’s murdered and missing Indigenous women and girls.

Canadians believe and mistakenly promote the idea that our Indigenous sisters and brothers want more than was provided for in these legally binding negotiations. And here we are, a nation embarking on a year-long celebration of our country’s birth.

Canadians can extend one olive branch by agreeing to Paquette’s simple request.