The far-right held a rally in Toronto and nobody came 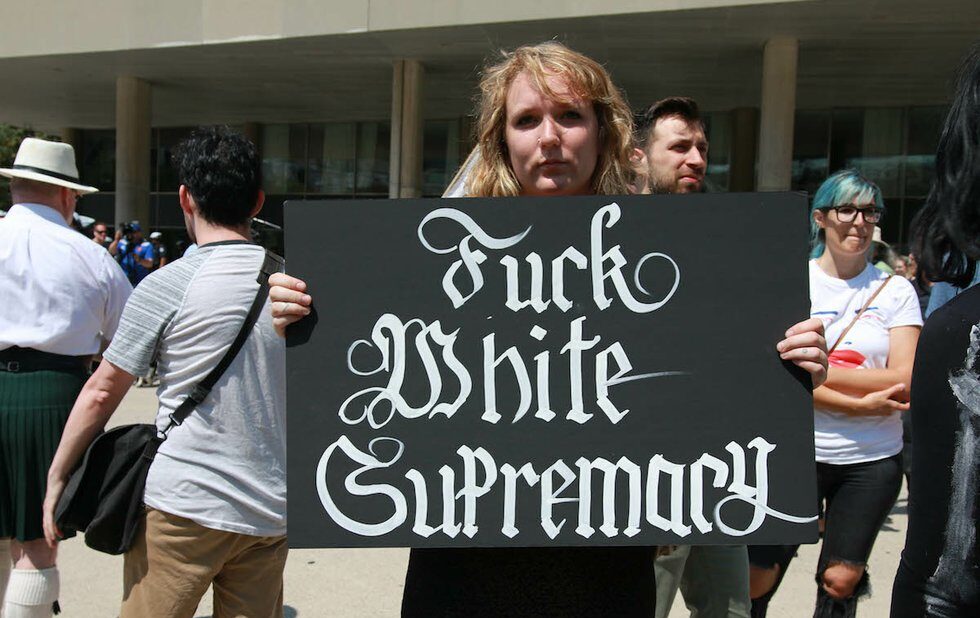 A Toronto demonstration on August 11 to mark the anniversary of last year’s violent “Unite The Right” rally in Charlottesville, Virginia, was supposed to feature some of the more notorious elements of North America’s far right, including members of white nationalist groups Soldiers of Odin, the Proud Boys and the Northern Guard.

Organized by the Calgary-based Worldwide Coalition Against Islam (WCAI), the event was scheduled to coincide with other actions south of the border, including a march by far-right groups on Washington, DC. A couple of hundred anti-fascist counter-protestors, a significant number among them dressed entirely in black and wearing masks, arrived at Nathan Phillips Square to confront the promised show of force, which never materialized. WCAI leader Joey De Luca, who announced a postponement of the rally two days before the event, blamed “people being snowflakes” about the demonstration being on the same day as the Charlottesville anniversary.

Instead, a small group (fewer than the three-dozen cops who showed up, some on horseback), turned up led by Sandra Solomon, a fixture on the local anti-Muslim scene, best known for ripping a copy of the Holy Quran outside of a Mississauga Islamic Centre earlier this year. She was draped in an Israeli flag and wearing a WCAI Canada T-shirt. Small Canadian flags stuck out on either side of her baseball cap. Counter-protestors quickly descended upon her, forcing her to take refuge in City Hall through a back door.

Solomon walked out the front door a short time later to record the scene on her phone. A brief but tense confrontation ensued in which Solomon was punched by a protestor (it’s unclear if charges will be laid) as she retreated back into the building. Police immediately gathered around the entrance and barricaded it while City Hall security locked the doors from the inside. A group of about six officers on horseback charged into the crowd.

The crowds dispersed shortly after that as the mounted police rode around the square before leaving themselves. De Luca has since announced that another gathering is being planned for next month in Toronto, but it’s hard to see that happening. City staff and Mayor John Tory say no permit will be issued to the group. The turn of events is an obvious expression of just how loose and prone to fracturing the so-called “coalition” of anti-Muslim actors is in Canada. 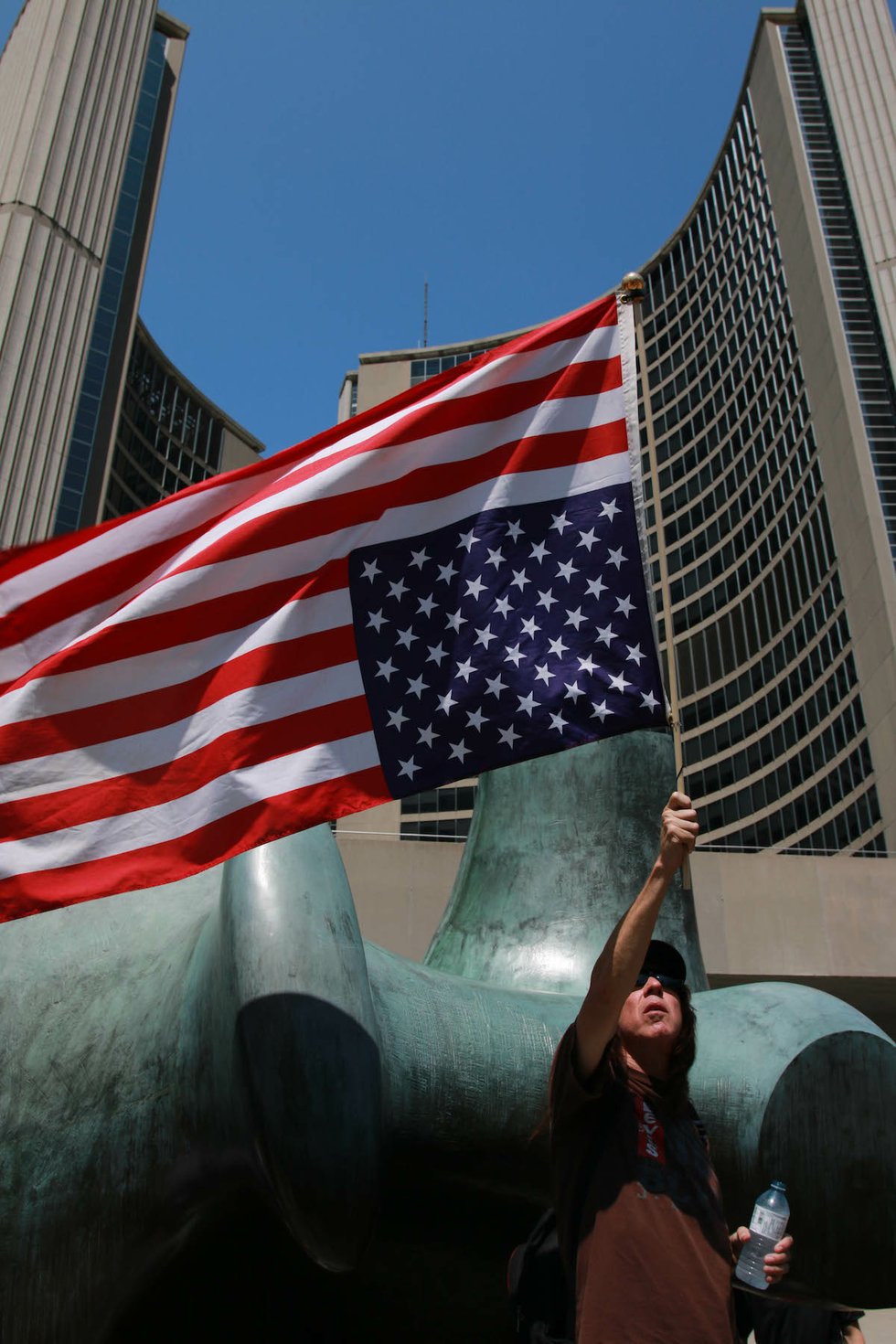 A movement in disarray

In a subsequent interview with far-right online commentator Duke Willis, De Luca claimed several times that having the rally on the weekend of the Charlottesville anniversary was a total accident.

“When we first announced this rally, it was about that Islamic call to prayer,” De Luca says, referring to the adhan made during Ramadan celebrations at City Hall this and last summer. “And all of a sudden, it’s a Charlottesville rally?”

De Luca insists that the rally was meant to address the promotion of Islam by Canadian “elites,” not a show of solidarity with white nationalists.

Except there’s evidence to the contrary, including Facebook comments by De Luca agreeing with a man named Bryan Mangione, who wrote on Facebook, “Wtf I thought it was a good thing that it was the anniversary date of Charlottesville.”

De Luca responds by saying, “Yeah I know it would’ve been great…” and goes on to blame “infiltrators” for the failure to mobilize. Among them, De Luca names Meir Weinstein of the Jewish Defence League (JDL).

The JDL head has been a ubiquitous presence at anti-Islam protests in Toronto, opportunistically hitching the JDL’s wagon to white nationalist elements among the anti-Muslim movement, in particular Soldiers of Odin. But Weinstein’s singing a different tune these days.

In an August 8 Facebook post condemning the WCAI’s planned Toronto rally, Weinstein urged Canadians to be “united against such hate.”

But, curiously, just a few hours earlier Weinstein posted a comment on his Facebook page defending the WCAI’s rally and criticizing an article in the Canadian Jewish News by Ron Csillag, which pointed out that the ‘Unite the Right’ event in Charlottesville “saw neo-Nazis marching with tiki torches, giving the Nazi straight-arm salute, and shouting, ‘Jews will not replace us!’”

Weinstein called Csillag’s piece “fake news,” writing that no anti-Semitism would be expressed by the WCAI protest. Sometime between the afternoon and evening on August 8, Weinstein changed his mind.

Weinstein’s post criticizing WCAI unleashed some vile anti-Semitic and Islamophobic online trolling among some of the more notorious names on Canada’s far-right, including Bryan Trottier, head of the CDN Wolf Pack, Ron Banerjee of Rise Canada and Solomon, who accused the JDL and Weinstein of turning their back on her.

“I don’t know what happened to JDL,” she writes. “What a shame trying to crush my rally.”

This doesn’t mean each camp won’t resort to their own actions. For instance, on the same day Solomon showed up with her coterie at Nathan Phillips Square, several members of the far-right “patriot” group ID Canada (formerly, Generation Identity Canada) unfurled an anti-immigrant banner over the Don Valley Parkway.

Meanwhile, Weinstein has reportedly met with police to address alleged threats against him. The white nationalist Canadian Nationalist Front posted on Facebook that they’ll “carve a swastika” on Weinstein’s face and other threats after his criticism of the WCAI’s rally. The CNF’s leader is open neo-Nazi Kevin Goudreau, who has a large swastika tattooed on his chest. 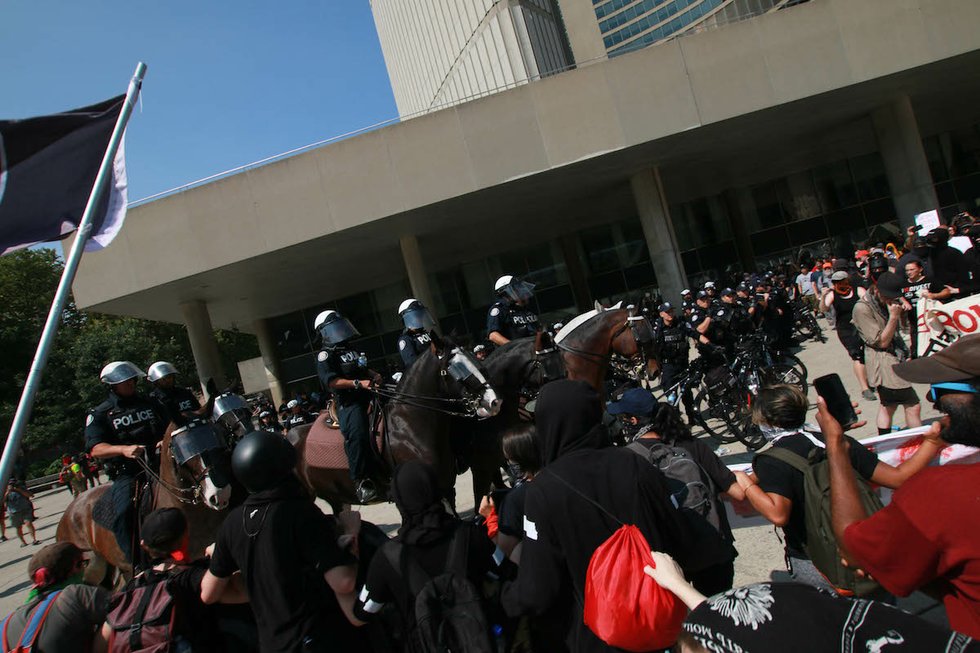