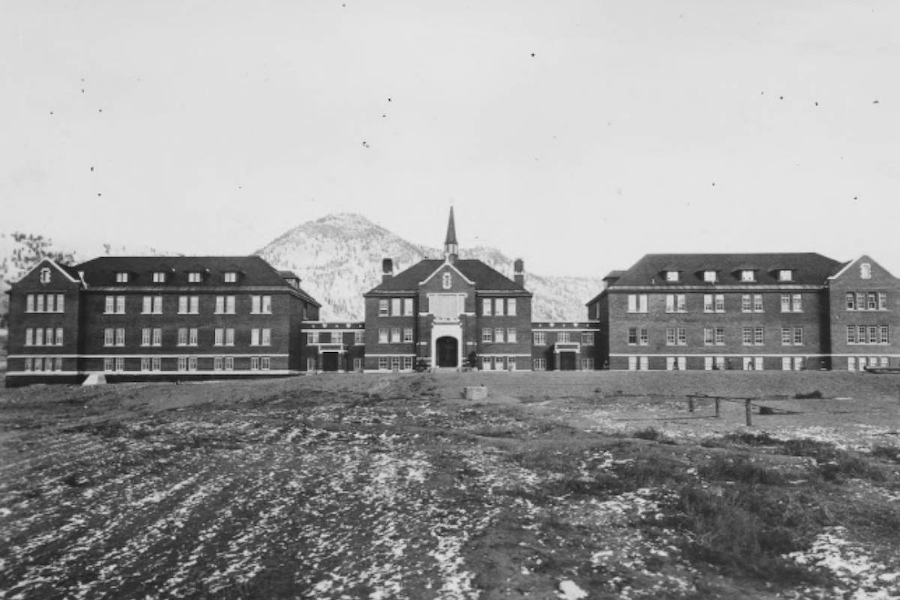 An undated photo of the Kamloops Indian Residential School.

A racist Canadian government policy led to the deaths of thousands of Indigenous children at Indian residential schools.

Now, the federal government has decided to fly flags at the Peace Tower and on federal buildings at half-mast to honour 215 of those children, whose bodies were buried in unmarked graves on the grounds of the now-closed Kamloops Indian Residential School.

Their remains were discovered by ground-penetrating radar specialists brought in by the leadership of the Tk’emlúps te Secwépemc. Kukpi7 (Chief) Rosanne Casimir announced the discovery on May 27.

“To our knowledge, these missing children are undocumented deaths,” Casimir stated in a news release. “Some were as young as three years old.”

Indigenous Services Minister Marc Miller said on Sunday that the flags would fly at half-mast until further notice.

The Peace Tower flag and flags on federal buildings will be flown at half-mast until further notice to honour the 215 children whose lives were taken at the former Kamloops residential school and all Indigenous children who never made it home, the survivors, and their families.

Under federal rules for half-masting the national flag, this can be done by the prime minister in “exceptional circumstance, and on the advice of the Department of Canadian Heritage and the recommendation of the Clerk of the Privy Council.”

Over the weekend, Toronto Mayor John Tory said he spoke with Mississaugas of the Credit First Nation Chief Stacey Laforme who asked that the city’s ceremonial flags be lowered in mourning. Tory said the flags will be lowered for nine days or 215 hours “to represent each life.”

There were 50 documented deaths recorded at the Kamloops Indian Residential School, which was built in 1890 and closed in 1978.

The UBC Indian Residential School History and Dialogue Centre said in a May 28 statement that there have been “similar findings emerging from communities across Canada such as with the Muskowekwan, Assiniboine and Penelakut.”

The centre expressed gratitude for the work by Indigenous communities to recover unidentified remains of children who were in government custody in residential schools, which existed in Canada from 1883 to 1996.

According to the Truth and Reconciliation Commission of Canada, about 150,000 Indigenous children were forced to attend these schools.

The centre pointed out that the work of the Tk’emlúps te Secwépemc “is in direct alignment with the Truth and Reconciliation’s Calls to Action 73 and 75 which speak to the need to identify unmarked graves and remains of children who attended residential schools and return them that they may be laid to rest on their territory with their people.”

The centre called upon governments and other heritage organizations to increase funding to enable other communities to do this work.

“This is a very difficult discovery and traumatizing for all Survivors and Indigenous communities, and British Columbians, who are learning today that residential schools were the site of burials and large graves,” the centre’s academic director, Mary Ellen Turpel-Lafond, Aki-Kwe, said. “This finding validates and confirms what Survivors and those in the community have said for years. We want to find out what happened to them. This is part of the legacy of residential schools.”

The Kamloops Indian Residential School was operated by the Catholic Church until 1969 before it was turned over to the federal government as a day school.

Archbishop J. Michael Miller, who heads the Roman Catholic Archdiocese of Vancouver, tweeted his “deep sadness” over news of the 215 children buried at the school.

“The pain such news causes reminds us of our ongoing need to bring to light every tragic situation that occurred in residential schools run by the Church,” he declared.

(2/2) by the Church. The passage of time does not erase the suffering that touches the Indigenous communities affected, and we pledge to do whatever we can to heal that suffering.

The head of the Catholic Church, Pope Francis, has not apologized for its role in what the Truth and Reconciliation Commission of Canada described as “cultural genocide” in Indian residential schools.

That prompted University of Ottawa law and medicine professor Amir Attaran to declare today that there “should be no respite for the Catholic Church until it levels with Canadians about its wrongdoing and makes amends judged fitting by their victims.”

There should be no respite for the Catholic Church until it levels with Canadians about its wrongdoing and makes amends judged fitting by their victims. I for one do not respect institutions of mass murder or welcome their frocked emissaries in my community. https://t.co/NY7ShMdXKK