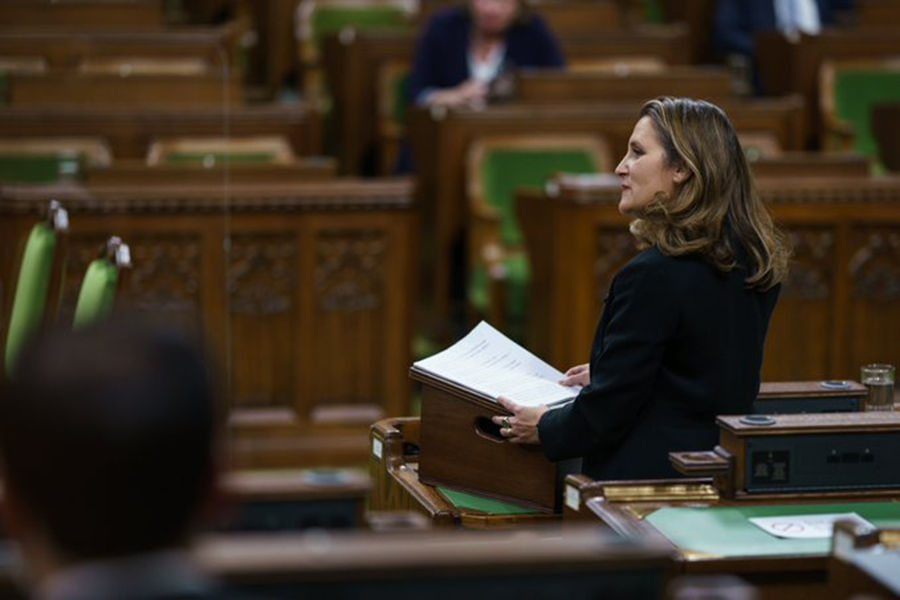 Finance minister Chrystia Freeland’s highly anticipated economic forecast delivered in the House on Monday is promising more money for sectors of the economy hardest hit by the pandemic.

The government is also promising access to a free coronavirus vaccine when it becomes available sometime in the new year. There has been some confusion – and debate – sown in the opposition benches about that.

The wage subsidy for businesses will be extended and a new line of credit will be available for the tourism, hospitality, and arts and culture sectors.

The economic update also includes a one-time top-up of the Canada Child Benefit for families with children under the age of six. There will be funds for planting trees and charging stations for electric vehicles. But fewer details were offered on the national child care plan promised in the Throne Speech outside of a commitment to fund the establishment of a child care secretariat.

$381 billion Estimated deficit for 2020, that’s up from the $343 billion figure offered by former finance minister Bill Morneau in July.

A trillion bucks Estimated debt by next year.

On the flip side

Gross domestic product rose by 40.5 per cent from July to September, according to Statistics Canada. That brings the total economic output to 95 per cent of pre-pandemic levels.

What the experts are saying

In a nutshell: the economic fallout from the second wave may be more damaging than the first, but we’ll have to wait until spring to find out how much more damaging.

“But the details make it clear that in terms of any big green or progressive reimagining, this is a roadmap built for winter and not yet an ambitious spring, given that the country is still hunkered down under a gathering snowstorm.”

“Workers are being heard”

In a press release, Unifor national president Jerry Dias says promises to extend the wage subsidy and boost funding for long-term care in the Liberals’ economic update “is starting the long but critical work of economic recovery.”

But Dias cautioned that “while this forward-looking funding will help Canada’s workers beat back the coming recession, many are falling through the gaps while the pandemic rages on.”

Unifor’s optimism, however, is not shared by the Canadian Union of Public Employees.

CUPE’s national secretary-treasurer Charles Fleury expressed “disappointment” in delays on the Liberals’ signature promises on child care and pharmacare. On long-term care, Fleury charged that the $1 billion for infection control and PPE in long-term care facilities “is effectively a subsidy to facility operators that does very little to address systemic issues.”

Sherena Hussein, academic director of the Sustainable Infrastructure Fellowship Program at York University, took notice of the tax changes as “a signal towards a tax strategy addressing Canada’s digital economy. At the same time, the work-from-home tax credit is another form of lost tax revenue for the government but one that is meant to appease the masses involved in remote work.”

Canadian Medical Association president Ann Collins delivered an update on the effects of COVID-19 on Canada’s health care system to the House of Commons Standing Committee on Health hours before Freeland’s economic update. She says health care systems were stressed before the pandemic and that they’ve now reached the “tipping point. The reality is that our health care system is on the verge of crumbling.”

But Collins says the CMA “remains hopeful” that talks scheduled next week with health ministers to discuss health care funding through the Canada Health Transfer (an issue which hasn’t been broached since the 90s) will bring relief.

No bailout (yet) for the airline industry

Mike McNaney is the president and CEO of the National Airline Council of Canada, which represents Air Canada, Air Transat, Jazz Aviation LP and WestJet). In a statement, McNaney says the $206 million promised to support regional airlines leaves out major airlines that operate internationally.

The group is calling for a COVID testing regime in airports across the country “to support the continued safe restart of the sector and address border and travel restrictions.”

Deficits to “infinity and beyond”

The Canadian Taxpayers Federation, not surprisingly, did not like the deficit numbers predicted. CTF’s federal director Aaron Wudrick drew on a fave line of Toy Story character Buzz Lightyear to say Liberal plans will take the national debt “to infinity and beyond.”

“Critics will argue that with the global pandemic, all this spending is necessary and with low-interest rates it’s really nothing to worry about,” Wudrick concluded in a statement released after Freeland’s speech. But “just because interest rates are low now doesn’t mean they will stay low forever.”

Wudrick says that if the current debt trajectory continues “our country will eventually face a fiscal reckoning that will make the painful cuts of the 1990s look like a walk in the park by comparison.” This is interesting coming from an organization that is recommending, among other measures, shrinking the size of the federal bureaucracy to 2017 levels, a move that it says would save $13 billion.

Amy Peng, a professor of economics at Ryerson University, shares the CTF’s concerns about the deficit, “but I understand that some of the emergency measures were necessary,” she tells NOW. “I wish the budget included some measures for revenue recovery, but it wasn’t addressed. Hopefully, in the spring budget, we can see plans for the $70 to $100 billion in investment to build the economy.”

David Macdonald, a senior economist with the Canadian Centre for Policy Alternatives, notes that while the deficit went up compared to the July snapshot offered by Morneau, “this was largely due to the inclusion of costing of new programs or extensions of existing programs that had already been announced over the course of the fall.”

Several of those programs actually came in under budget, but that the drop in government tax revenues was too much to offset the cost of some of the new programs.

He notes that there was very little in the way of new spending on purpose. He predicts that’s because we’ll continue to see short-term funding announced for programs until a spring budget.

“This will be similar to what we saw over the course of the fall, with big new announcements trickling out fairly regularly.  To see the details of any longer-term plans beyond emergency response on health care, long term care, child care, infrastructure and so on, we’ll have to wait until the spring.”