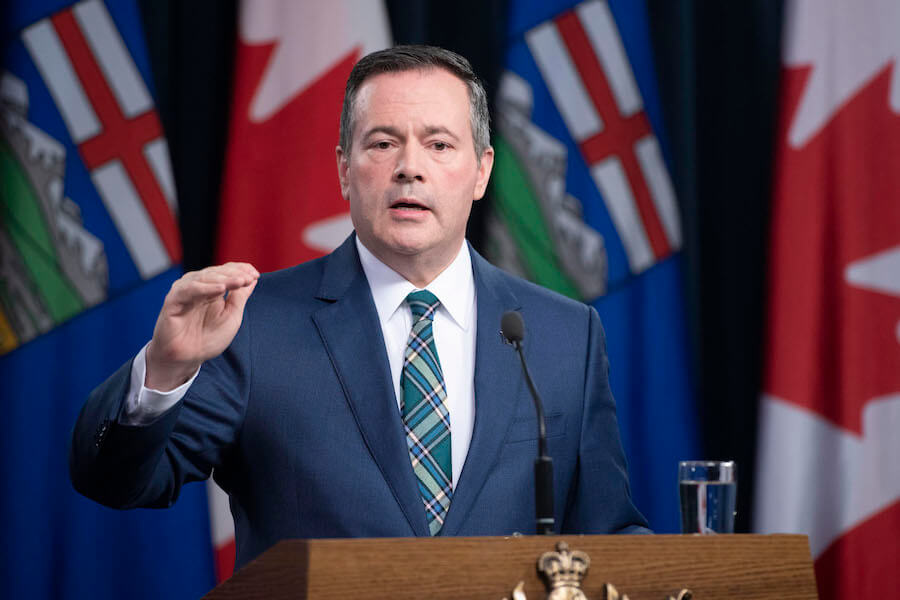 U.S. President Joe Biden’s decision to cancel the Keystone XL pipeline may have sent shock waves through Canada’s oil and gas sector, but it wasn’t unexpected.

Biden signalled his intentions to scrap the project, which was slated to carry some 830,000 barrels per day of oil sands crude from Alberta to refineries in the Gulf Coast, during the presidential debates.

The cancellation should serve as a wake-up call for Canada’s oil and gas industry about which way the sector is headed. But we’re still in denial about that.

Alberta Premier Jason Kenney, whose province invested some $1.5 billion in the Keystone project, wants to start a trade war with the U.S. – at least, when he’s not threatening to sell off the pipe already purchased for the project for scrap metal.

But for Kenney and Canada’s petroleum producers there’s double trouble coming down the pipe.

“Unacceptable risk” to the Great Lakes

Michigan’s Democratic Governor Gretchen Whitmer has ordered Calgary-based oil and gas giant Enbridge to shut down the operation of its Line 5 by May 2021.

The 1,032-kilometre, dual pipeline was built in 1953. It carries some 2.5 million barrels of petroleum products per day (twice the proposed capacity of Keystone XL) to customers and refineries in the U.S. midwest, including some 40 per cent of the oil and gas processed at refineries in Sarnia, Ontario.

In a lawsuit filed against Enbridge, the state alleges that continued operation of the pipelines poses an “unreasonable risk” to the Great Lakes. The suit says that Enbridge’s “persistent and incurable violations” of structural problems with the pipeline “imposed on the people of Michigan an unacceptable risk of a catastrophic oil spill in the Great Lakes that could devastate our economy and way of life.” According to court filings, the Great Lakes is responsible for some 350,000 jobs in Michigan and some $1.2 billion a year in tourism revenue.

The state argues that the problem is not just that Enbridge’s pipeline is 67 years old, but that it runs underwater in the Straits of Mackinac connecting Lake Michigan to Lake Huron. The waterway is not only part of an environmentally sensitive area, but a major shipping route.

On two occasions since 2018, ships dropping anchor in those waters have caused damage to the pipeline – including to a major support structure in 2019.

The state says in court filings that Enbridge didn’t reveal that incident to authorities until June 2020. It also says that its investigation determined that four of the five vessels “potentially responsible for the impacts” were Enbridge contractors.

Enbridge, for its part, counters that the State can’t order the pipeline shut down based on the potential risk of a break.

The company also argues in court documents that the state’s order crosses into federal jurisdiction and, if granted “would create a disturbing precedent whereby other jurisdictions could take copycat actions and thereby impede interstate and international commerce in petroleum and other products.”

But Enbridge’s reputation precedes it.

The company is responsible for the largest oil spill in the Michigan’s history. That was back in 2010 when a section of its Line 6B ruptured and spilled some 1 million gallons (U.S.) of heavy crude from Alberta and Saskatchewan into the Talmadge Creek contaminating a 40-kilometre stretch that feeds the Kalamazoo River. It took some 18 hours for emergency crews to respond to the breach (and only then after they were alerted by a Michigan utility employee). Enbridge employees at the company’s control centre in Edmonton had misinterpreted alarms notifying them of a break in the pipe as a malfunction. Clean-up of the river, which would take five years, cost more than US$1.2 billion, making it the most expensive offshore cleanup in U.S. history.

It’s a cautionary tale for Michigan State authorities, who point in court documents to the devastation that could be caused to its tourism industry in the event of an accident on Line 5.

Enbridge actually has approval from the state to build a tunnel to replace Line 5. But the completion of that project is years away. And while some – in particular Conservative Party leader Erin O’Toole – have raised alarms about job losses in Sarnia over the shutdown of Line 5, in the short-term it will mean Enbridge rerouting some of the crude being carried by the line now through other pipelines in the vast web of lines in the Great Lakes Basin. Shipping crude from Alberta and Saskatchewan by rail or truck is another option that has been floated. Either way, it adds up to an expensive proposition for Enbridge. And that’s really the point.

Greenpeace Canada climate campaigner Keith Stewart says signals coming from the U.S. should be a recognition of the fact that the days of sucking black tar out of the earth are numbered.

“We’re going to be producing less oil – and soon,” says Stewart. “So who exactly is going to be buying the oil?”

Nine of the world’s top 10 economies have signed onto zero net emissions by 2040 (or thereabouts). The fact is, Stewart says, we don’t need the pipelines we have now given declining demand for oil and gas. Yet we continue to build them, stuck in the belief that only through building more infrastructure can we save jobs – even though the oil and gas sector accounts for some 2 per cent of jobs in Canada. That’s not a small number, but Stewart argues the billions we’re spending on building pipelines like Trans Mountain could be better spent helping to transition oil and gas workers into green energy jobs.

The Trans Mountain pipeline is another designed to carry tar sands crude to tidewater. The feds spent some $4.5 billion on the project, buying it from Kinder Morgan in 2018 after the company threatened to walk away from the project, leaving some 7,000 jobs in limbo. The cost of the project to taxpayers has gone up to more than $12 billion as the project continues to be mired in design and construction delays. Construction on the pipeline only resumed this week after being halted in December following two serious workplace accidents.

Meanwhile, the Liberals have announced what’s widely viewed as the most ambitious climate action plan in the country’s history. But we haven’t heard much about the government’s 2019 promise on the so-called “just transition” to a post-oil economy.

Part of the reason for that is political – the feds don’t want to further inflame anti-Ottawa sentiment out west, where massive job losses in the oil and gas sector have given rise to a nasty petro-nationalism and the formation of the separatist Maverick Party.

But Stewart says it’s time to have a frank discussion with Canadians about the need to transition away from fossil fuels. Yes, the shift will be difficult for workers – and made more difficult by the fact we should have been doing this 10 years ago. “There won’t be $100K jobs driving a truck,” Stewart says.

European countries have recognized the need for a shift away from oil and gas. So has the automotive industry in Canada with its shift to the manufacture of electric vehicles.

As long as there are politicians like Kenney in Alberta and elsewhere stoking the same old fears about jobs, it’s going to be a tough sell. But the need for climate action shouldn’t be seen as an attack on the oil sector. It’s the direction we need to be headed if our economy is going to survive.