Why every Canadian should attend a citizenship ceremony 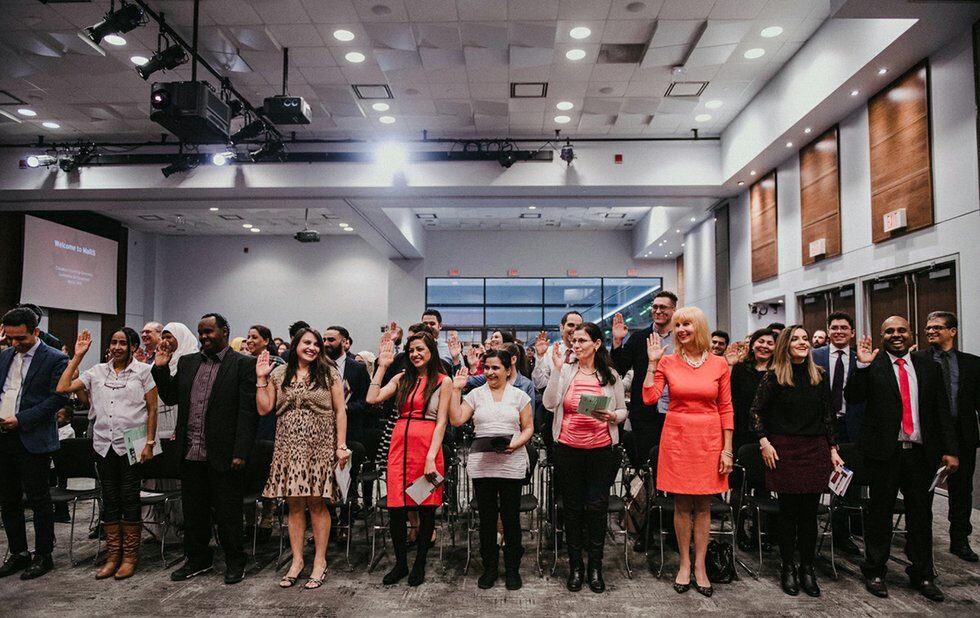 They came from 26 countries, some fleeing violence and persecution, others seeking better opportunities for themselves and their children. They were joined by their friends and families, and after taking their oath of citizenship, the nervous energy in the room switched to celebration.

On April 6, 59 new Canadians became citizens at a ceremony at the MaRS Discovery District. Every Canadian by birth should go to a citizenship ceremony at least once in their lives.

It’s not only a celebration of our shared values, opportunities and responsibilities as Canadians, it’s also a powerful antidote to the racially tinged nationalism being pushed by far-right movements in Canada who believe that our culture is under attack and that so-called “old-stock” Canadians are somehow more Canadian simply because they are white and European.

Unlike many people born here, new Canadians who had to struggle to earn their citizenship appreciate the responsibilities of what that means more than some of us who were born here.

The April 6 event was part of an enhanced ceremony put on by the Institute for Canadian Citizenship (ICC), co-founded by John Ralston Saul and former Governor General Adrienne Clarkson. The ICC and other community groups find special venues, speakers and curate roundtable discussions, which are not part of regular citizenship ceremonies.

The ceremony has an official purpose to administer the Oath of Citizenship, but it’s also a celebration open to the public. For new Canadians, being part of an enhanced ceremony is by luck of the draw.

Elder Garry Sault of the Mississaugas of the New Credit opened the ceremony with a song and a story.

When it’s time for the oath, all the soon-to-be Canadians stand at the front. But Judge Albert Wong, one of Canada’s five citizenship judges, also invites everybody else who are already citizens to reaffirm their oath together with the new Canadians. We all raise our right hands.

“I swear that I will be faithful and bear true allegiance to her Majesty Queen Elizabeth II, Queen of Canada…” Then we sing O Canada.

For new Canadians, the oath is the end of a years-long process. Many at this ceremony had to learn English as their second or third language. After years of residency they had to apply and pass a written test on Canadian history and politics, as well as an in-person interview.

After the ceremony there’s sandwiches and cake. One man jokes that now his kids – who have their citizenship – can’t tease him about not having his any more. I was asked by the ICC to host a roundtable on what it means to be Canadian.

I sit down with the Shakil family, who migrated from Pakistan six years ago. Daughter Urooj has a degree in biochemistry and now works in early childhood education. Son Shayan is studying to be a mechanical engineer at Humber College and sits on the board of the student union. They and their parents, Aziz and Farhana, all applied together and helped each other study for the citizenship test.

Urooj is looking forward to voting, while Aziz wants to get a permanent job.

I asked them what they want to tell those who were born here about becoming a citizen.

“A lot of people don’t appreciate Canada the way they should,” says Shayan.

He’s right. Canadians by birth sometimes take our citizenship for granted without really appreciating the powers it gives us: self-determination through democratic participation, a safe place to live, protection from persecution, to name a few.

Evan Balgord is executive director of the Canadian Anti-Hate Network.