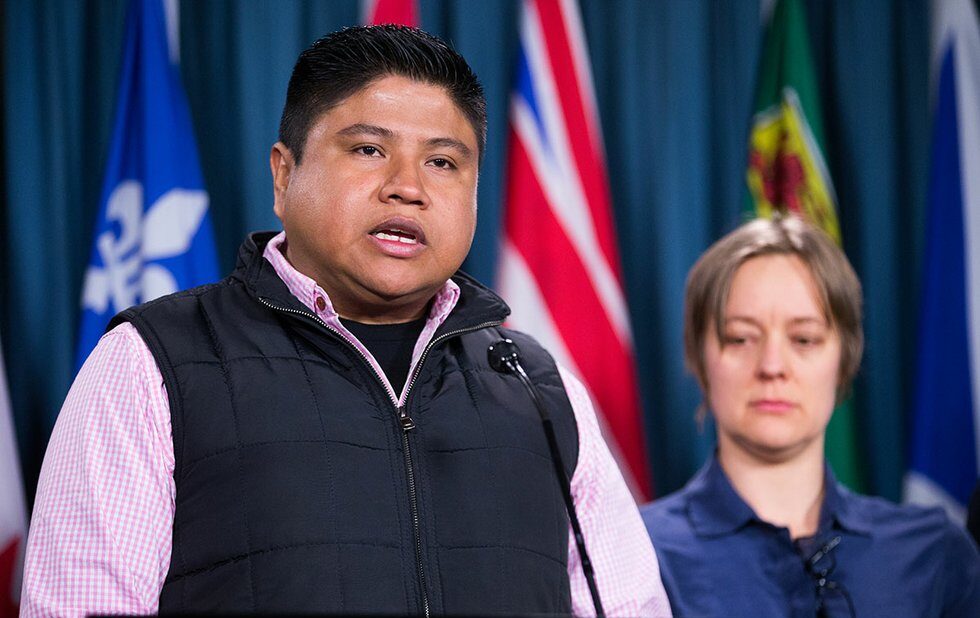 More than eight years after the murder of Mariano Abarca, a founding member of the Mexican Network of Mining Affected People (REMA in Spanish), in Chiapas, Mexico, the role of Canadian diplomats at the embassy in Mexico City – and their lobbying efforts on behalf of the Calgary-based mining company implicated in Abarca’s death – is now being questioned.

Abarca was shot outside his home in 2009, allegedly over his opposition to a barite mine operated by Blackfire Exploration in Chicomuselo. Two Blackfire employees and a contractor for the company were arrested in connection with his murder, but never tried.

Last month, a delegation from Mexico, including Abarca’s son José Luis Abarca, filed a complaint with the Office of the Public Sector Integrity Commissioner of Canada calling for an investigation into the actions – and omissions – of diplomats who intervened on behalf of Blackfire with Mexican officials, despite chronic pollution problems at its mine and accusations of human rights abuses against the company.

The complaint was prepared by the Justice and Corporate Accountability Project (JCAP), a volunteer initiative of Osgoode Hall Law School and Thompson Rivers University in Kamloops, BC.

Its report to the commissioner poses two questions. First, did the actions and omissions of government officials create a danger to the life and safety of Mariano Abarca? Second, did the Canadian embassy fail to report knowledge about possible corruption involving Blackfire?

According to the complaint, the Canadian embassy in Mexico was closely monitoring the growing conflict between locals and Blackfire’s operations, yet disregarded issues raised by Abarca and others. The complaint argues that the embassy violated its own stated role to “facilitate an open and informed dialogue between all the parties” in Canadian business ventures abroad.

“My father appealed directly to the Canadian embassy for support when he and others were being threatened by Blackfire employees,” says José Luis Abarca at a press conference in Ottawa. “The embassy knew all this, but it supported the company, pressuring Chiapas state authorities to protect Blackfire’s interests.”

MiningWatch Canada had also raised concerns over the relationship between Canadian diplomats in Mexico and Blackfire. In 2015, the company was cleared of corruption allegations by the RCMP.

Abarca was murdered in broad daylight in a drive-by shooting. His assailant was on a motorcycle. Orlando Velázquez was also seriously injured in the incident.

Only a few days later, the mine was shut down by state authorities on environmental grounds.

Documents filed as part of the complaint show the embassy continued to provide support to the company, advising how it could sue Mexican authorities under the terms of the North American Free Trade Agreement.

“[Embassy staff] were getting direct information from the company about company concerns,” says Charis Kamphuis, assistant professor of law at Thompson Rivers and co-founder of JCAP.

Abarca’s family is still pressing for a full and impartial investigation into his murder.

The Office of the Public Sector Integrity Commissioner of Canada was created in 2007 to deal with whistleblower complaints in the federal public sector. It has 90 days to determine if it will launch an investigation into JCAP’s complaint.

“The commission has discretion to refer matters to other offices,” says Edith Lachapelle the manager of communications for the office. “However, the commissioners are not judges. They don’t have the authority to apply punitive damages.”

Lachapelle says that, “to date, there has never been a finding of wrongdoing committed by anyone working for a Canadian embassy investigated by the Commissioners office.”

When asked by NOW if the new ombudsperson will have the power to also investigate complaints about the actions of Canadian officials, Pierre-Olivier Herbert, the minister’s press secretary, responds that CORE “will also identify and highlight systemic challenges and trends related to the responsible business conduct of Canadian companies and the context within which they operate through ongoing reporting to the Minister of International Trade, the Minister of Natural Resources (in the case of mining and oil and gas issues), and Parliament, as appropriate.”

The 2018 budget doubles the initial investments to the newly created office, providing $6.8 million over six years.

However, mining activists express concern that the watchdog will only investigate complaints after the fact. They say Canada needs to set clearer rules to prevent embassies from supporting companies that are engaged in questionable activities.

“The new watchdog is focused on investigating companies and may not be prepared to address complaints involving Canadian government’s own officials,” says Jen Moore of MiningWatch Canada.

Of the 293 mining companies operating in Mexico, 205 are backed by Canadian capital.

Research undertaken by JCAP, has found that between 2000 and 2015 there were at least 44 deaths, more than 400 people injured and are than 700 cases (including legal complaints, arrests, detentions and charges) in connection with 28 Canadian mining companies operating in 13 countries in Latin America.

But Moore says the Canadian government’s “commitment to economic diplomacy is actually undermining the well being and safety” of those fighting Canadian operations.

This week, representatives from 24 Latin American and Caribbean countries signed the world’s first legally binding convention to protect “access to information, public participation and… justice in environmental matters” at a meeting of the negotiating committee of the Economic Commission for Latin America and the Caribbean (ECLAC) in Costa Rica.

“The lives of people and the well being of their communities needs to be put first instead of Canadian profits,” says Moore. “We need to be questioning what is taking place around the world in our name and at what cost, and to start to see a reckoning.”