A sit-in, a walk and a vigil are happening in support of Indigenous communities following the discovery of unmarked grave sites 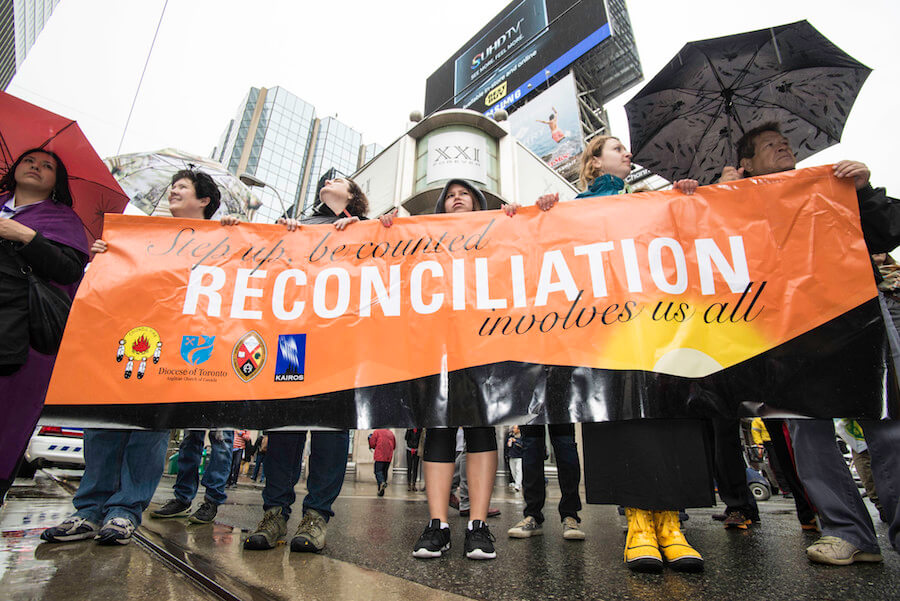 Demonstrators rally at Yonge-Dundas Square in Toronto on May 31, 2015 ahead of the release of the Truth and Reconciliation Commission report. Photo credit: Michael Swan / Flickr

As of June 28, 50 cities across the country have responded to Indigenous-led movement Idle No More’s calls to cancel Canada Day celebrations following the discovery of unmarked graves at former residential school sites in Cowessess First Nation and Kamloops that are believed to contain the remains of mostly Indigenous children.

Today, the Lower Kootenay Band said that ground-penetrating radar located the remains of 182 people in unmarked graves south of the former St. Eugene’s Mission Residential School near Cranbrook, BC.

“It is heartening to see 50 municipalities cancelling Canada Day out of respect for the grief Indigenous peoples are going through. Every other city and town should follow suit,” said Idle No More co-founder Sheelah McLean in a statement. “Stolen Indigenous land and stolen Indigenous lives are not things to celebrate.”

The discovery of the grave sites is forcing many Canadians to reckon with the country’s treatment of Indigenous people like never before. Indigenous groups and leaders have also renewed calls for justice and accountability, including laying criminal charges against living government and church officials who operated the schools.

In 2015, the Truth and Reconciliation Commission (TRC) report into Canada’s residential school system estimated that some 150,000 First Nations, Métis, and Inuit children were taken from their families as part of a forced assimilation policy that the report referred to as “cultural genocide.”

The commission documented 6,000 student deaths as a result of the system, which operated from 1876 to 1996, but TRC chair and retired senator Murray Sinclair has said the death toll is likely in the 15-25,000 range or higher.

Earlier this year, Toronto had cancelled Canada Day celebrations due to the COVID-19 pandemic and is not hosting any official virtual celebrations. Instead of a light show, the CN Tower will light up orange “in solidarity with and in support of Indigenous communities across Canada.”

Idle No More has called for demonstrations on Canada Day and there are at least three major protests taking place in Toronto, including a sit-in, a walk and a vigil. Details are below.

Toronto Council Fire is organizing a walk to honour and support former residential school students, as well as those who died. The walk will begin at the Council Fire building at 439 Dundas East at 10 am and head to Yonge-Dundas Square where a round-dance will take place before continuing to Nathan Phillips Square.

The Halton Hills Alliance for Social Change is staging a sit-in at Queen’s Park at 1 pm to demand accountability from government and church leaders. A land acknowledgement will take place at 2:30 pm, followed by speakers and a march to a vigil at Yonge-Dundas Square at 4 pm. Participants are encouraged to wear orange shirts and bring banners and signs.

Idle No More, Idle No More Toronto, Idle No More Ontario and Dashmaawaan Bemaadzinjin (They Feed The People) are organizing a rally and candlelight vigil at Yonge-Dundas Square in the late afternoon. Elders, drummers, jingle dancers and speakers will be on hand.

Organizers are asking attendees not to bring signs, but wear orange shirts in remembrance of the children who died at the Kamloops and Cowessness First Nation residential schools (as well as wear masks and follow social distancing protocols). Bring you own candle and children’s shoes and moccasins/slippers to leave for a memorial. Full details via Facebook.