NOW MagazineNewsChanging how we remember war

Changing how we remember war

There are more than 6,000 war memorials in Canada. In Toronto, war history is remembered in styles that run from. 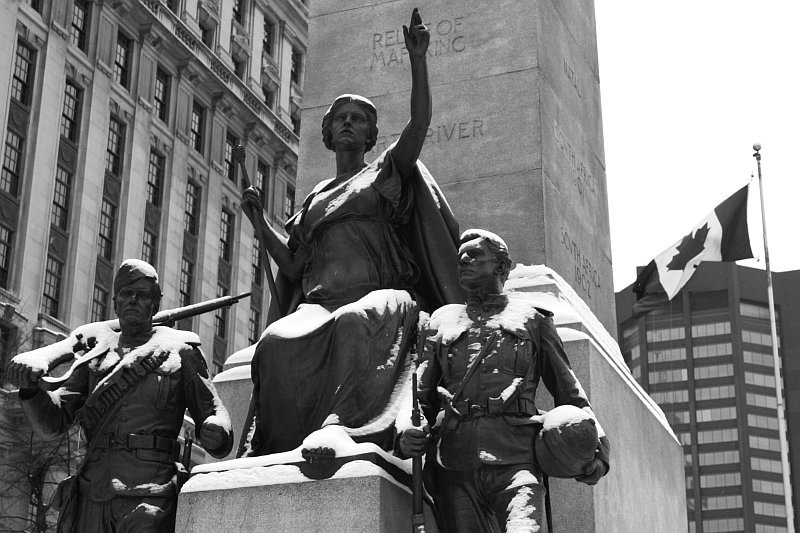 Cross memorial at Vimy Ridge Parkette in Mimico is tiny it has just 32 names but dignified.|Weather-worn monument to Volunteers who died defending Canada at Lime Ridge

There are more than 6,000 war memorials in Canada. In Toronto, war history is remembered in styles that run from the imperious, to the modestly sublime, to the deliberately ridiculous.

The modest stone cross memorial at Vimy Ridge Parkette in Mimico carries just 32 names, a tiny number compared with the more than 11,000 names on Canadian sculptor Walter Allwards gigantic memorial at Vimy in France, but it was enormous for the Mimico of 100 years ago.

On Remembrance Day in 2016, a car stereo played Abide With Me and, at the 11th hour, a man grown old recited, They shall not grow old as we grow old, before a bugling of the Last Post.

Peacekeepers who had served in Cyprus and Bosnia, the children and grandchildren of veterans, and people with stories to tell lined up to leave wreaths and poppies.

Most memorable of those stories? A six-year-old Belarusian girl exiled to a German labour camp flees under machine gun fire toward rumours of advancing Allied troops. A bullet hits her leg but she survives. She lands in Canada with her parents, a family of displaced persons. They settle in Mimico, become citizens. She grows up, marries, has children, accommodates as best she can to the luxury of an ordinary life.

Must a monument be a statue or a sculpture? Obviously not in a country where many towns have memorial arenas and where streets and buildings are named after heroes of their time. That naming can cause embarrassment, though, when the honouring turns out to be dubious or offensive

Torontos oldest war memorial is also one of its most curious

On the east side of the University of Toronto campus is a weather-worn monument by sculptor Robert Reid to the Volunteers who died defending Canada at Lime Ridge, 2 June 1866. By the standards of any day, that battle near the town of Ridgeway, west of Fort Erie, was little more than a skirmish. Nine Canadians the Ridgeway Nine were killed, three of them University of Toronto students, and six or eight invaders, Fenians from the United States who came in support of their Irish compatriots against the British for Home Rule in Ireland.

The Fenians were a ragtag but formidable army, veterans of the American Civil War that had ended 14 months earlier, armed with muzzle-loading rifles and experts in their use. Their Canadian opponents were a smartly uniformed but barely trained militia, armed with smoothbore muskets they had never fired in action and, most of them, never at all.

After Ridgeway the Fenians won a smaller battle at Fort Erie but, for fear of going in over their heads, they fled across the Niagara River to be arrested by U.S. authorities.

The Fenian raids might have been miniscule, but they are credited with hardening Canadian resolve to bring about Confederation one year later. It was also an experience that convinced those who engaged with the Fenians that Canada needed a modern army.

At the foot of Bathurst Street is Douglas Couplands monument to the War of 1812, a pair of 5-metre-high toy soldiers.

The knocked-down silver soldier wears the uniform of 16th United States Infantry Regiment. The standing gold soldier wears the uniform of the Royal Newfoundland Fencibles. Both fought at the Battle of York on April 27, 1813, which concluded with the blowing up of the Fort York armoury, the death of U.S. General Zebulon Pike and the burning by U.S. troops of much of the town of York thats now called Toronto.

Its ironic, a moment of Canadian triumph in a battle that Canada lost with Canada then called British North America represented by a soldier from Newfoundland, which would not be part of Canada until it joined Confederation in 1949.

I wanted to make a statement that wasnt just that there was a war but that people are trying to change the way we remember the war, Coupland is quoted as saying in an interview at the monuments unveiling. Do I think the Canadians the British won the war? I think they won, the British and the Canadians and the Newfoundlanders and the Bermudans. History is a fluid notion. It can be re-written if youre not vigilant.

Bermudans? Wheres their memorial? Or for First Nations, who also fought for Canada?

During the War of 1812, 20 years before slavery was abolished in the British Empire, Black troops of the West Indies Regiment fought for the British on the Atlantic Coast and the Gulf of Mexico. In Upper Canada there was a Coloured Corps, and the support of First Nations was indispensable.

In Toronto, there is a Tecumseth Street but no memorial to Tecumseh, who allied his Confederacy to the British and Canadians with tremendous effect until he was killed in 1813.

When it was built between 1906 and 1910 at University and Queen, the Memorial to the South African War, another Allward creation, looked over a huddle of houses until 1931, when they were expropriated, demolished and replaced with predecessors of the buildings that stand there today.

The South African or Boer War, 1899-1902, in which Canada joined Britain in its conflict with the Boer republics in South Africa, was an atrocious opening for the 20th century. British victory was secured only after Boer women, children and men too old to fight were incarcerated in concentration camps where 28,000 died of disease and malnutrition 22,000 of them children. That was in addition to the 14,000 African farmhands and servants of Boer farmers who died in separate camps in that pre-Apartheid but profoundly racist time.

Some 267 of the more than 7,000 Canadians who served died in a war that somehow put Canada on the world stage 15 years before the birth of a nation that is supposed to have happened at Vimy Ridge.

Monuments to the colonizers, but not First Nations

Among the many missing memorials in Toronto, top of the list must be a monument to the Toronto Purchase of 1787, an act of bloodless war by subterfuge, which secured, for British colonizers, right of use that quickly became de facto ownership of a vast tract of land, from Ashbridges Bay to Etobicoke Creek, north from Lake Ontario to a line midway between Richmond Hill and Newmarket.

The boundaries of this primordial GTA were so sloppily defined, it was unclear where the purchase began and ended, so the whole thing was revised in 1805, to include even more land.

The deal was supposed to have been settled in 2010 by payment of a paltry $145 million to the Mississaugas of New Credit, but surely this whole sorry affair deserves a monument that will make us remember it. Who should make that monument?

In an age of heritage plaques, Wikipedia, smartphones and QR codes, remembering has never been easier but knowing what to do with that memory has never been harder.

Richard Longley is a former president of the Architectural Conservancy of Ontario.