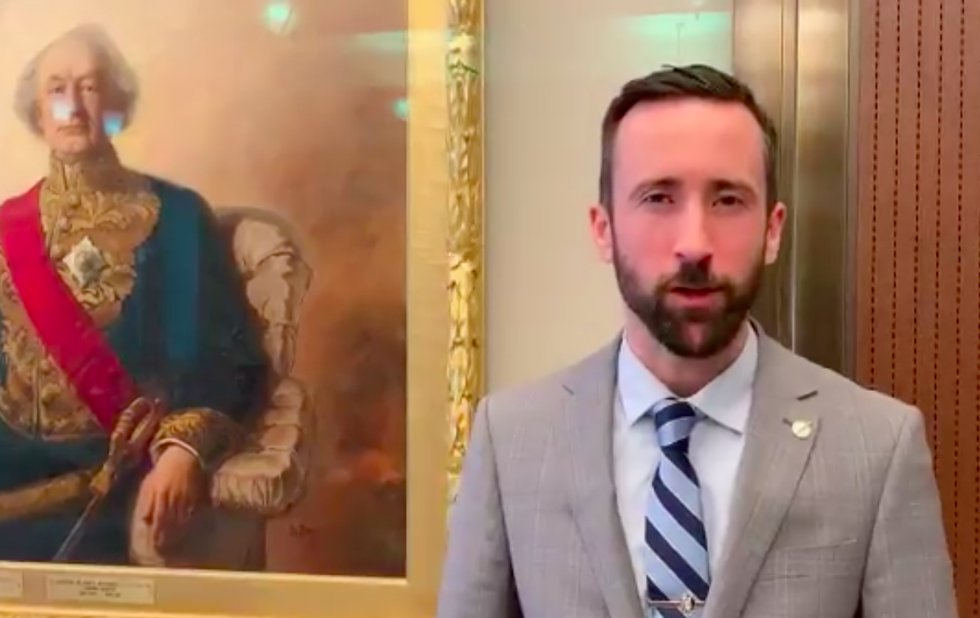 Derek Sloan has cast himself as the social conservative in the race to replace Andrew Scheer.

Derek Sloan has cast himself as the social conservative in the race to replace Andrew Scheer.

The Chinese Canadian National Council for Social Justice (CCNC-SJ) has sent an email to Conservative Party leadership candidates and members of the party’s caucus asking them to remove MP Derek Sloan from caucus.

The letter also asks the party’s leadership nomination committee to disqualify Sloan from seeking the party leadership over recent remarks he made to supporters in an email and video questioning the loyalty of Canada’s chief medical officer of health, Theresa Tam and suggesting she be fired.

“Does she work for Canada or for China?” “Dr. Tam must go!” Sloan wrote. “Canada must remain sovereign over decisions. The UN, the WHO, and Chinese Communist propaganda can never again have a say over Canada’s public health!”

The CCNC-SJ sent the letter on Tuesday, but has yet to receive a response. The letter asks that Sloan withdraw his comments and apologize “unreservedly.” The group says it plans to make public any response to the missive tomorrow (Thursday, April 30).

The Canadian Press reported today that Ontario Conservative MPs had passed a motion during a telephone meeting on Tuesday to demand Sloan apologize for his comments. Sloan responded tonight with a statement on Twitter.

Outgoing Conservative Party leader Andrew Scheer at first refused to condemn Sloan’s comments when asked about them during a press briefing last week, saying he didn’t want to inject himself in the leadership race. Scheer partially reversed himself on Monday, saying Sloan should not have questioned Tam’s “loyalty,” but declined to say if Sloan would face any repercussions.

Under the rules of the 2015 Reform Act, a member of the caucus can be expelled by a vote of fellow caucus members, but a vote would have to be initiated by the party’s House leader. Michael Chong, the Conservative MP who wrote those rules under a package of democratic reforms adopted by parliament – and one Conservative MP sent the CCNC-SJ’s letter – was not immediately available for comment.

In February, the party’s leadership nomination committee rejected the candidacy of Richard Decarie after the former Stephen Harper deputy chief of staff made comments in a TV interview that being gay is a choice and that marriage should be reserved for “a man and woman.” Decarie also said during the interview that he would defund abortion. But it’s unclear if Sloan’s candidacy can be stopped at this point. At press time, a spokesperson for the party had yet to respond to questions from NOW.

A handful of Conservative MPs have denounced Sloan’s comments, but the majority of his caucus colleagues, including his leadership rivals, have remained silent publicly.

Sloan, whose office has yet to respond to NOW’s email request for comment, said in an interview with the Belleville Intelligencer last week that he would not be apologizing for his comments after county officials in his riding of Hastings–Lennox and Addington wrote Scheer and urged him “to show Canadians Mr. Sloan’s racist comments are not representative of your party’s views. If this means expelling him from the party, so be it.”

Sloan told the newspaper his comments were not directed at Tam’s loyalty or race, but her job performance.

He’s quoted in the article as saying that, “When I made the statement, obviously, the idea people would think it was racist was not even on my mind. I would have said those statements about any public health officer that made those decisions in her spot. It had nothing to do with her background.”

Sloan’s comments came a day after Vancouver police released a video of an assault on a 92-year-old Asian man with dementia who was pushed out of a 7-Eleven by a customer. Vancouver police say there was a spike in anti-Asian incidents reported to police in March.

A recent poll commissioned by the CCNC-SJ suggests that anti-Chinese and anti-Asian sentiment is on the rise in Canada’s three largest cities. Some 21 per cent of the 1,130 people surveyed said they don’t think it’s safe to sit next to an Asian person on the bus. In Montreal, meanwhile, the Korean consulate issued a warning to members of the community after a stabbing incident last month.

Susan Eng, the director of the CCNC-SJ, says the attacks are not happening in a vacuum. And that many other incidents and “microaggressions” involving Asian people are not being reported.

She says anti-Asian racism “has always been bubbling under the surface in Canada,” but that the coronavirus crisis has added fear and provocation to the mix.

She says the situation is only being exacerbated by comments from politicians like Sloan and the failure of others in his party to condemn them.

“There were any number of public health officials that were saying the same thing (as Tam) on the spread of the virus. What distinguishes her? It’s the fact she’s female on the one hand and Asian,” says Eng.

Sloan, meanwhile, has cast himself as the social conservative in the race to be CPC leader. His website lists the “guiding principle” of his policies “to do everything in his power to keep Canada a shining beacon of freedom and liberty as it was intended to be.”

Sloan says he would repeal Bill C-16, the amendment that added gender identity and gender expression to the list of prohibited grounds for discrimination in the Canadian Human Rights Code.

Sloan describes himself as “unapologetically pro-life” and says that “the politically correct intolerance of ‘cancel culture’ is out of control and must be stopped.” He also supports the removal of “non-victim, non-violent” firearm offences from the Criminal Code.