Slaves to chocolate: the child labour in your Hershey’s bar

Despite efforts to curb it, child labour in global chocolate production supply chains has increased in recent years – and the recent cocoa price collapse has only made things worse 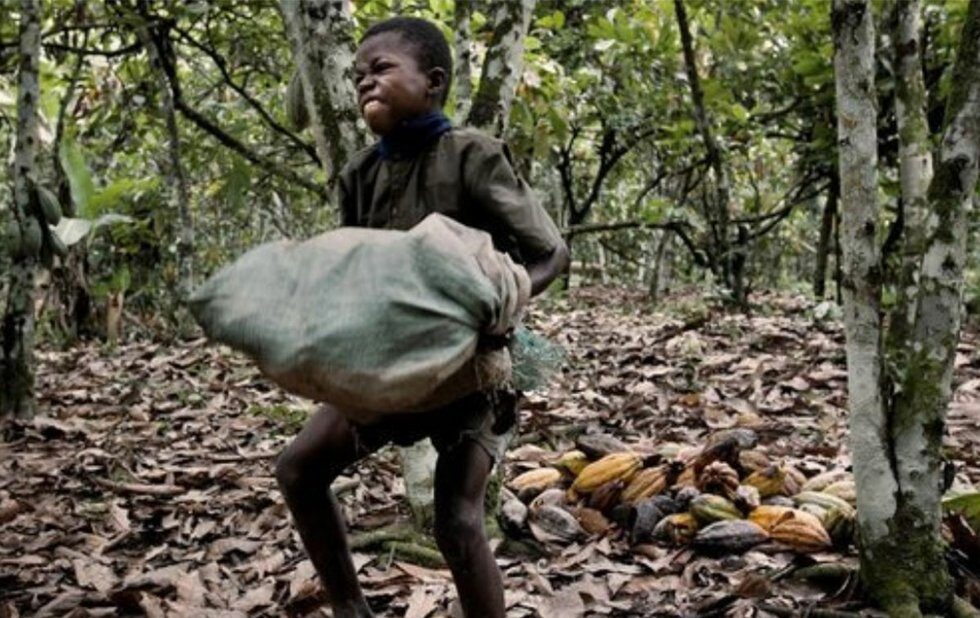 Children sold to plantation owners form part of worldwide supply chains in the making of chocolate.

If consumers knew what goes into making chocolate, they wouldn’t buy it.

The firm filed a $550-million class action lawsuit against the Hershey Company in December alleging that the child labour and slavery prevalent in the company’s supply chain “are so abhorrent, that failure to disclose these practices amounts to a misrepresentation to Canadian consumers.” The firm says “Canadian consumers have been duped and deceived into buying these products.”

It’s anyone’s guess whether a Canadian class action suit can succeed where two similar American claims have failed. Nor is it clear whether a shot to the chocolate maker’s bottom line would contribute to the end of child labour in cocoa.

But Tanel says, “I don’t see any way of ending child slavery other than making it no longer profitable.”

The story first broke back in 2000 but Canadians still don’t seem to realize that child labour or slavery – including that of kidnapped children sold to plantation owners across international borders – is a likely ingredient in their chocolate, especially if it involves cocoa beans originating in West Africa.

Not all child work is considered labour, but a child cocoa labourer may be kept out of school to do physically harmful work, such as carrying heavy loads (often on the head), using dangerous tools such as machetes and handling harmful substances, such as pesticides.

Despite efforts to curb it, child labour has only increased in recent years. In Ivory Coast, for example, child worker numbers in cocoa grew 51 per cent to 1.3 million between 2009 and 2014.

Major chocolate manufacturers, under threat in 2002 of labelling legislation in the United States, promised to remove slavery from their supply chains by 2005. That stretched to 2008 and then 2010. A 2018 report on the $100-billion global chocolate industry claims that not a single company or government is anywhere near the current goal of reducing child labour by 70 per cent by 2020.

The recent cocoa price collapse, including 2017’s more than 30 per cent plunge, has only made things worse.

“What we see as one of the biggest root causes of human rights violations in the cocoa supply chain is that the price has been extremely low. And therefore farmers just don’t have enough money, don’t make enough of a profit from [growing] the crop to do it sustainably and respectfully,” says Julie Francoeur, executive director of Fairtrade Canada.

To earn more, farmers have the option of investing in Fairtrade certification to be able to sell their beans on Fairtrade terms. The international Fairtrade minimum price is set to increase by 20 per cent this year to $2,400 USD per metric tonne, compared with the current commodity cocoa price of around $2,200.

Unfortunately, once farmers get certified, they aren’t guaranteed the higher prices. Some farms manage to sell 70 per cent of their cocoa at Fairtrade prices, others only 10 per cent, according to Francoeur.

Not enough buyers clamouring for ethical cocoa suggests not enough consumers demanding ethical chocolate. Yet data shows Canadians do want to avoid child labour in the products they buy, so what gives?

Speed of consumption is a factor. People might research their next big buys, like running shoes or cars, but when a food is eaten as quickly as chocolate, they don’t think as much, says Francoeur.

Legislation is one way to focus awareness.

The United Kingdom’s Modern Slavery Act 2015 requires that all businesses of a certain size disclose what steps they’re taking to address modern slavery in their supply chains. Businesses failing to take meaningful steps are shamed into compliance.

Similar legislation could be in the cards for Canada.

An October 2018 report of the Standing Committee on Foreign Affairs and International Development recommended the government “develop legislative and policy initiatives that motivate businesses to eliminate all forms of child labour in their supply chains.” Last month the federal government promised to initiate consultations on possible legislation within the year.

Avoiding chocolate’s darker side became a priority for Toronto-based niche chocolate maker Soma Chocolate in the aftermath of the first revelations about child cocoa labour.

The company sources the more flavourful beans it needs for its craft chocolate from South and Central America, Figi, Vietnam and Madagascar, where child labour is less prevalent than in West Africa.

Soma co-founder David Castellan says he knows his producers well, often meeting them at international craft chocolate markets. He trusts their beans are grown ethically. And since poverty is most often associated with child labour, the fact that the beans Soma sources command a price many times higher than even Fairtrade cocoa helps satisfy Castellan that no little hands laboured to produce his beans.

However, they’re grown half a world away. Even Fairtrade auditors, who actually visit farms periodically, can’t guarantee the absence of child labour. “At a certain point you have to trust people,” Castellan says.

A class action win alone likely won’t solve the complex problem of child labour. But it stands a good chance of bringing more public awareness to the issue, which is what may be needed most.

“Canadians care about the ethics of the products they consume,” says Tanel. “There is an appetite for ethical goods, but it’s impossible to satisfy that appetite if consumers are completely kept in the dark.”