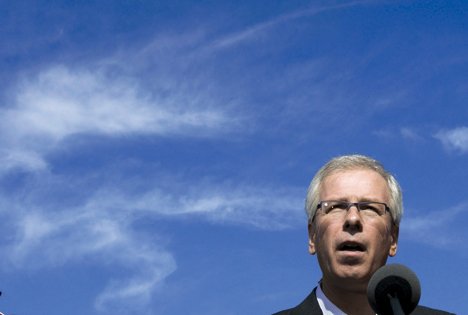 True confession: my name is Wayne and I am a wonk. Nevertheless, I could never figure out exactly what the Green Shift was supposed to shift, and could never explain to people why it made sense.

The overriding problem, bar none, of Stéphane Dion’s green pitch was that it failed the elevator test: it could not be presented in the time it takes to ride up or down. It was so wonky that it induced the political allergy known as MEGO (My Eyes are Glazing Over) among friends as well as enemies.

This tells all but the dweebest of dweebs that a shift to green tax and fiscal policy is not the hook for explaining eco economics to the overwhelming majority of voters – everyday people with more or less fleeting concerns about environmental survival and more or less pressing anxieties about their own economic survival.

Dion geeked into a trap that made his proposals the central issue in the campaign instead of the sorry Afghan war and the environmental, cultural and economic record of a minority Conservative government.

To appreciate what the Conservatives pulled off, realize that they got Canucks, who overwhelmingly support Obama, to vote instead for a male version of Sarah Palin.

At the best of times, death and taxes are considered inevitable but well worth suppressing one’s awareness of. This natural human tendency to avoid painful subjects has been accentuated over the past 40 years by a relentless right-wing campaign to depict all taxes as money grabs that go to government bureau-fatcats, not to valued public programs run by hard-working frontline workers.

To try to fly a platform based on tax and fiscal tools in the face of these deep-seated belief patterns verges on a death wish. Hello out there in Canada’s “natural party of government”: could you not at least call it a Green Tax Cut, which is what a green shift really is – moving taxes off income and levying them on bad stuff such as pollutants, to fund alternatives that are good?

Book-smart greens like to talk tax and fiscal policy because it gets at the core issue of deceptive pricing in an eco-abusing economy. When farmers dump livestock manure in a river and let synthetic pesticides sink into the water table, for example, they pass what should properly be their own costs of production on to others.

The cost of food that comes from such a farm is low only because the full cost has been “externalized.” Making that real cost transparent is the job of a green shift, the reasoning goes.

Street-smart greens, by contrast, won’t touch such tax and fiscal policies with a 10-foot barge pole. That’s because they know that many otherwise green voters have an inner polluter who likes gas, electricity and food to be cheap an election is not a time to fight with that inner polluter, savvy campaigners know.

Instead of trying to win people to the idea of using government policies to penalize bad consumer decisions, greens who aren’t insistent on self-sabotage present government as a positive agency that can accomplish things individual consumers can’t on their own.

Instead of taxing fuel-intensive food from afar, for example, governments can buy local and sustainable food for hospitals, schools and government cafeterias. Or favour contracts with enviro-friendly energy companies or offer free solar water heaters to all consumers who buy energy-efficient windows. (The savings from not having to build nuclear plants will more than cover this.)

This second approach has the added advantage of identifying how governments can use collective economic muscle to counter job losses from a global recession, a theme Dion’s Green Shift failed to adapt to.

In the U.S., the recession brought on the irreversible decline of support for Republican John McCain, who is trusted by few to care for the needs of people of modest means. In Canada, the recession sealed the defeat of Stéphane Dion, who’s seen as a source of further instability, not alternative job creation strategies.

It’s possible that some of the political shortcomings of Dion’s Green Shift are due to his Liberal lineage. But Dion’s problems go far beyond the shortcomings of Liberals. New Democrats and Greens are no less a sheltered workshop for policy geeks and wonks, no less prone to fiscal policy with a strong whiff of righteous moralism, no less nervous about giving government the muscular presence in the economy that was normal for people of all political stripes before the 1980s.

Fiscal realities, as well as the realities of political campaigning, make the recovery of that programmatic heritage a priority for all parties intent on facilitating a green future.

Wayne Roberts is the author of The No-Nonsense Guide To World Food (Between the Lines).