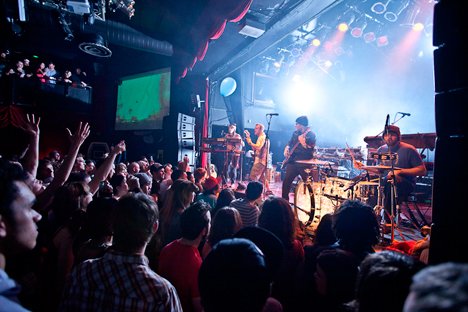 A roundup of reviews from CMF.

Atlanta’s Donnis should have had Wrongbar going berserk yesterday, but the crowd- save a few enthusiastic rap-types in the front row- was extremely unreceptive. It is hard to say for sure, but this lack of appreciation probably truncated his set a shame, since Toronto infrequently sees Southern rappers passing through its corridor. Clocking in at about fifteen minutes, Donnis’ performance touched on his internet burners like Gone and Over Do It, which he delivered with palpable bravado.

FIELDS OF FUR at the Garrison. Rating: NNN

Brian Borcherdt’s Fields of Fur strike a balance between his solo work’s hushed emotion and Holy Fuck’s boldness. At an almost full Garrison, the trio played un-angry rock full of amorphous, well-sung oohs and aahs, reverb-drenched guitars and garage rock drums. There was a tentative quality to the set, and the songs sometimes lacked definition, but Borcherdt reminded us that FOF are three shows old. Good things to come. CARLA GILLIS

RJD2 wasn’t kidding when he said his intent is always to cram as much information as possible into the shortest time frame. RJ’s Mod Club time frame exceeded that of most other CMW performers, but it was still an overload of styles and techniques. Alternating between a five-sampler set-up and a four-piece band, the musician sporadically shifted between incarnations: record-scratching turntablist, guitar-wielding funk instrumentalist, naval-gazing acoustic balladeer and robotic alter-ego, Commissioner Crotchbuttons. Then, as if to prove his versatility, he combined them all into one masterful performance of Ghostwriter. RICHARD TRAPUNSKI

Criticizing the Vivian Girls for sloppy musicianship and naive lyrics is missing the point. They’re a garage band! The music is dumb, sure, but it’s dumb fun. Keeping things fast and loose, the trio ripped through most of their discography in the 45 minute set, breaking only to incite crowd and swig from a shared bottle of Jameson whiskey. It was far from profound, but it was lively and engaging. From a band like Vivian Girls, that’s the most you can expect. RT