There are many issues for which his government can be criticized, but that’s irrelevant to the new breed of conservatives, who at heart are really outraged by Trudeau’s genuine social liberalism – and the fact that he is a Trudeau 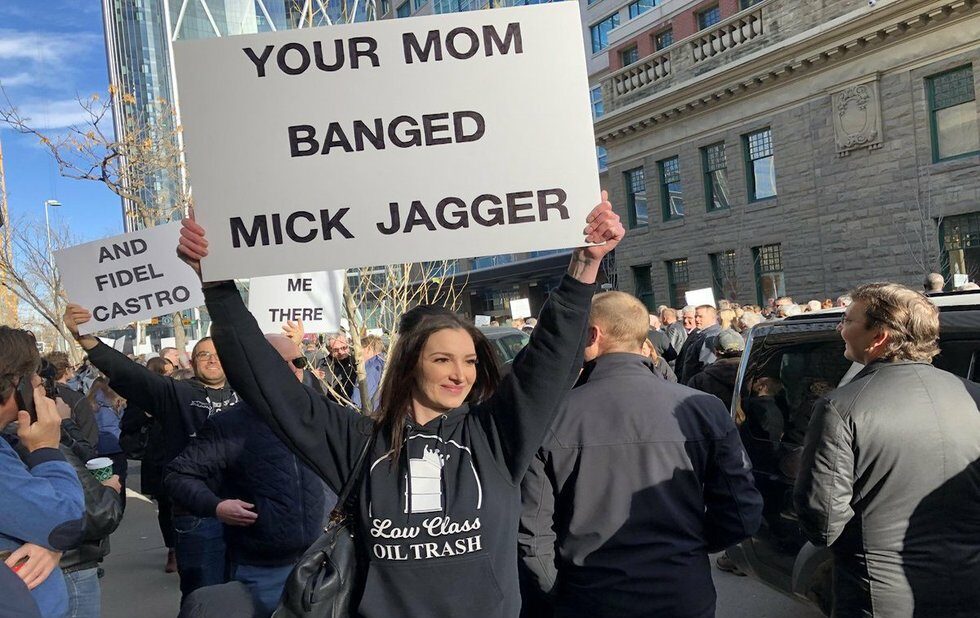 A demonstration in Calgary last Thursday to protest changes to Canada’s Environmental Assessment Act and that featured protestors who were vulgar and abusive toward visiting Prime Minister Justin Trudeau, was praised by some of the country’s Conservative leadership as a model for grassroots activism.

The signs of two protestors in particular disparaging Trudeau’s mother and repeating a conspiracy theory in conservative circles that Trudeau is the offspring of Fidel Castro, made the rounds on social media. As did the black hoodie being worn by one of the protestors. It featured a picture of a noose hanging from a tree, and the words “Come West Trudeau” on it, which caught the attention of the RCMP.

Turns out the brainchild behind the hoodies is what passes for your run-of-the-mill, pro-oil sands Conservative supporter these days.

Alberta’s NDP Premier Rachel Notley has received death threats, and cries of “Lock her up” are often heard when she’s mentioned at Conservative gatherings.

At both the provincial and federal levels, Canada’s Conservatives are increasingly embracing raw populism by broadcasting fake news on social media and even in interviews.

Now we’re told that Andrew Scheer’s handlers in Ottawa want him to be “strong” like Doug Ford, whose office is apparently monitoring which members of the caucus do not applaud the premier’s every bombastic roar during question period in the legislature.

When did the conservatism of Joe Clark, Kim Campbell and Brian Mulroney (not to mention Bill Davis) become so callous?

Conservatism was deeply ideological during the 70s as well. Under Margaret Thatcher and Ronald Reagan, it was fashionable to read Friedrich Hayek, Milton Friedman and Karl Popper, and to discuss libertarianism and the free market. The old red Tories and paternalistic, pragmatic conservatives were dismissed as anti-intellectual and overly moderate. This was sometimes pretty unpleasant stuff, but at least debate and discussion were embraced.

That changed radically as the new century emerged, with nationalist and populist ideas drifting over from Europe to the U.S., reaching its apotheosis with the election of Donald Trump and the placing of formerly detested ideas in the centre of the body politic. Now it’s happening in Canada.

Witness, for example, how many on the right defended the public platform given recently in Toronto to former Trump advisor Steve Bannon. The middle ground of conservatism has moved strongly to the right.

One of the factors inherent in this shift is the new respectability of racism, cloaked as a defence of western values.

Muslim immigration, numerically insignificant in Canada, now dominates the implicit, and sometimes horribly explicit, views of conservatism, as with white nationalist Faith Goldy during her recent run for mayor.

Conservatives had abandoned public racism, but have now grabbed it back and pretend it is a reaction to Islamic fundamentalist terrorism, which is supported by a tiny percentage of Muslim people.

Such terrorism is, of course, indefensible. But most of its victims are Muslims. In fact, the biggest threat to safety in North America is domestic terrorism perpetrated by right-wing white men.

But none of that matters, as hysteria now rules. The Trudeau protest is a case in point.

There are many issues for which his government can be criticized. That’s irrelevant to the new breed of conservatives, who at heart are really outraged by Trudeau’s genuine social liberalism – and merely by the fact that he is a Trudeau.

Fear is part of all this reaction.

Marginalized groups like Black, trans and First Nations are demanding rights that straight, white men have taken for granted for centuries.

That terrifies not only rank-and-file right-wingers, newly emboldened by Trump and Ford, but also motivates former liberals and moderates who have followings on social media and even in mainstream outlets.

The cult of Jordan Peterson, for example, has far more backing among certain television producers and newspaper editors than we might like to think. Some of Peterson’s supporters are acutely devious. They push, they shout, they claim to merely support new and open ideas but then sit idle in the face of horribly anti-trans and anti-Muslim comments and actions.

In Ontario, meanwhile, the Ford government’s direct attack on the poor, on minimum wage workers, on migrants and the marginalized that would have been stunning even under Mike Harris is now accepted as entirely sensible policy.

The ranting manner in which it has all been delivered by the minister in charge, Lisa MacLeod, also goes largely unchallenged.

There’s a good chance it could become worse.

In Britain, far-right nationalist figures like Tommy Robinson, whose views were never taken seriously, are now wined and dined by people in power.

Robinson has links to The Rebel and Ezra Levant, who still has numerous financial supporters and connections in conservative movements throughout this country, despite once employing the likes of Proud Boys’ Gavin McInnes and Goldy. Ottawa MPs may claim to reject Levant now, but their connections to him go back many years.

The far-right monster has always breathed, but it was too directly violent, unsophisticated and fringe to be a serious threat. No longer. Anti-Trudeau hoodies are one thing the electoral success of exponentially right-wing governments are quite another.