NOW MagazineNewsKilling cormorants: Is Ontario’s feathered pariah about to be culled out of existence?

Killing cormorants: Is Ontario’s feathered pariah about to be culled out of existence?

A proposal by the Ford government to allow year-round hunting of the demonized birds over "aesthetics" and other concerns raised by the commercial fishing industry will wipe them out, say activists 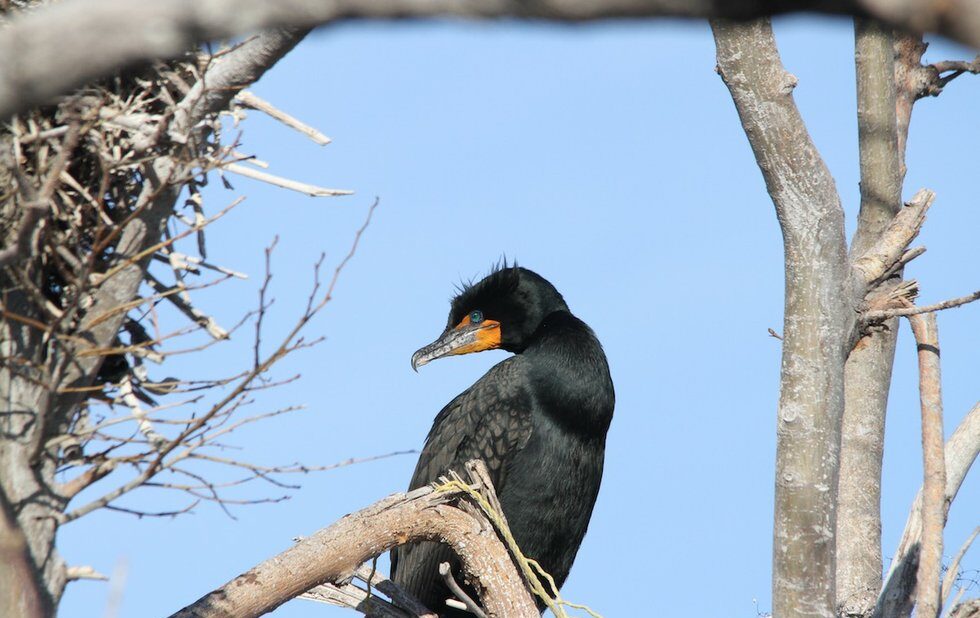 Toulouse-Lautrec was fascinated by the Japanese tradition of ukai, in which fishermen train cormorants to retrieve fish in rivers. The fishermen place a ring around the bird’s neck to prevent them from swallowing the larger fish.

After a day of fishing together, Tom would accompany Toulouse-Lautrec on a leash into a nearby café where the artist and cormorant would share a drink of absinthe and presumably trip out together.

“It has developed a taste for the stuff,” said Toulouse-Lautrec to a friend. “It takes after me.”

Cormorants are a lot older than us. They emerged as a well-defined avian family some 34 million years ago, when there was nothing remotely human trudging on the landscape.

“There is an incredible logic to the birds’ form,” says Linda Wires, a research scientist and author of The Double-Crested Cormorant: Plight Of A Feathered Pariah.

“If you go back 80 million years ago, there are various linages of foot-propelled diving birds like the cormorant that went extinct and then they evolved again as completely separate lineages and they really haven’t changed much.”

In the Old Testament, on the other hand, the cormorant is symbol of apocalyptic doom, among the 20 birds considered detestable and “ritually unclean” by ancient Hebrews and not to be eaten on account of the fact that they consume flesh. In the 1950s, cormorants were commonly referred to as the n-word bird and n-word goose. A negative view of the bird persists, including in Ontario, where campaigns to cull them in provincial parks have been ongoing for the last two decades.

Now the Doug Ford government has a proposal to allow hunting of the birds from March 15 to December 31 across the province. This not only includes the breeding season but represents the entire time the birds are present in the province each year.

As it is written, the Ford government’s plan would allow hunters to kill as many as 50 cormorants per day. If 1 per cent of Ontario hunters kill a total of 50 cormorants over the entire hunting season, the double-crested cormorant will be eradicated from the Great Lakes before Starbucks releases its pumpkin-spiced lattes. 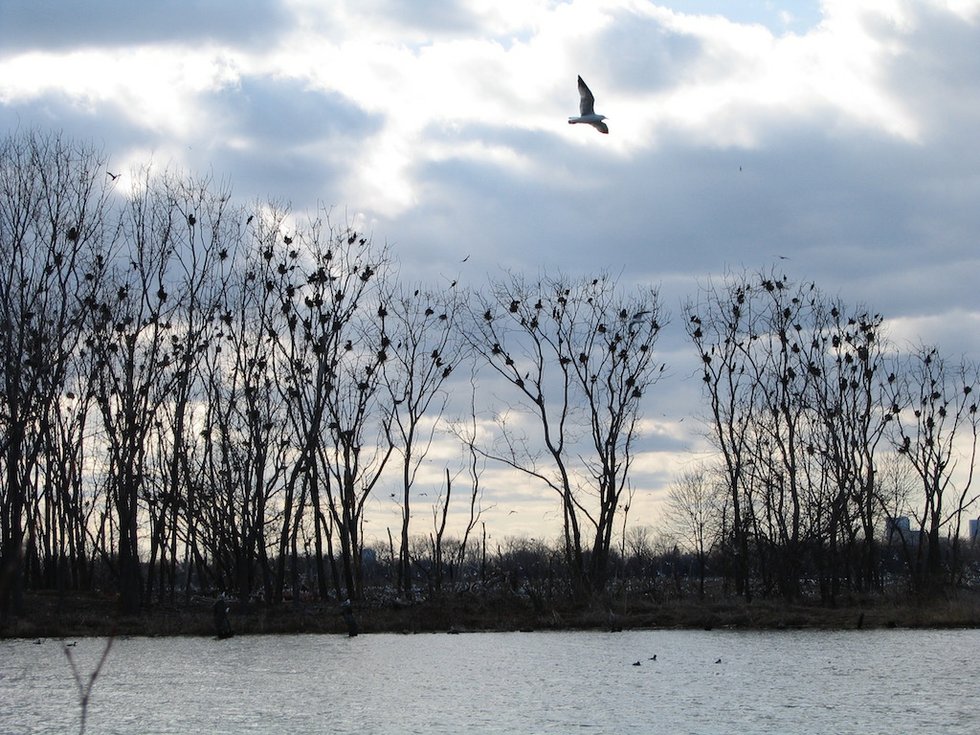 The double-crested cormorant (Phalacrocorax auritus) stands two-and-a-half feet tall with a wingspan of four feet. Their orange beaks are hooked at the tip. Their long necks and short webbed feet make them somewhat goofy-looking. On land they take two-legged hops instead of walking. Their feathers are not as oily as other birds this reduces their buoyancy and allows them great horizontal and vertical dexterity underwater.

Cormorants are colonial nesting birds. They aggregate in large numbers to gain greater individual protection from predators. Sadly, their concentrated numbers make them easy targets for humans who view cormorants as gluttons.

The Ford government’s proposed hunt, for example, is in response to “concerns” raised by the commercial fishing industry, property owners and individuals “that cormorants have been detrimental to fish populations, island forest habitats, other species and aesthetics.”

The Ontario government has been culling the birds from provincial parks since 2002. A coalition of animal rights groups organizing under the banner Cormorant Defenders International (CDI) has engaged in direct action to stop the practice.

“We would go off in our canoes and position ourselves directly in the line of fire so they wouldn’t shoot,” says AnnaMaria Valastro of Peaceful Parks.

This summer, Valastro plans to be present at small cormorant island colonies in Georgian Bay. “People need to see what the hunts actually look like,” she says.

CDI has successfully beat back proposals to cull cormorants in most provincial parks, with the exception of the cormorant cull of Middle Island in Point Peele National Park, where 20,000 birds have been killed over the past 10 years.

There, the Animal Alliance has documented birds limping across the island, dragging injured wings and floundering in the water as they slowly lost energy or bled to death.

“It is soul-destroying to witness these birds being shot,” says the Alliance’s Liz White.

A fact sheet from the Ontario Federation of Anglers and Hunters on the Ontario government’s proposal states, “Development, contaminants, invasive species and other human actions have altered our natural ecosystems. To help balance our ecosystems, human intervention is sometimes required. Cormorant control is one way we can successfully achieve this.”

But according to animal rights activists, cormorants are not detrimental to fish populations. In fact, they feed on invasive fish species of no interest to commercial and sport fisheries, like the alewife and round goby.

Climate change is more to blame for the demise of fish species in the Great Lakes. Warming waters have already seen an expansion of smallmouth bass populations, which are decimating forage fish communities.

Carleton University biologist Steven Cooke warns, “There are cascading risks to the broader ecosystem if you remove cormorants” from the equation.

“The very fish species that people care the most about could be those that end up being negatively impacted by a cull,” he says. “If you remove some of that predatory pressure you might see increases in population sizes that stresses those populations. You can muse all day about what could happen but we really don’t know and can’t predict the effects.”

In fact, cormorants clean up after humans and are helping biologists track the amount of plastics in our environment.

“We are using cormorant nests as an indicator for the amount of plastics that are in their environment,” says York University biologist and cormorant specialist Dr. Gail Fraser who studies the Tommy Thompson Park colony. “They take our plastic waste and build them into their nests they bring back straws, sunglasses, toothbrushes, plastic bags.”

Some of the more interesting items brought back to decorate their nests include a Toronto Blue Jays hat and a ballerina doll cake-topper. Cormorants are attracted to plastics of the same emerald green as their eyes and the cobalt blue of the inside of their mouths. It is speculated that they choose these colours to amplify the attractiveness of their own features. 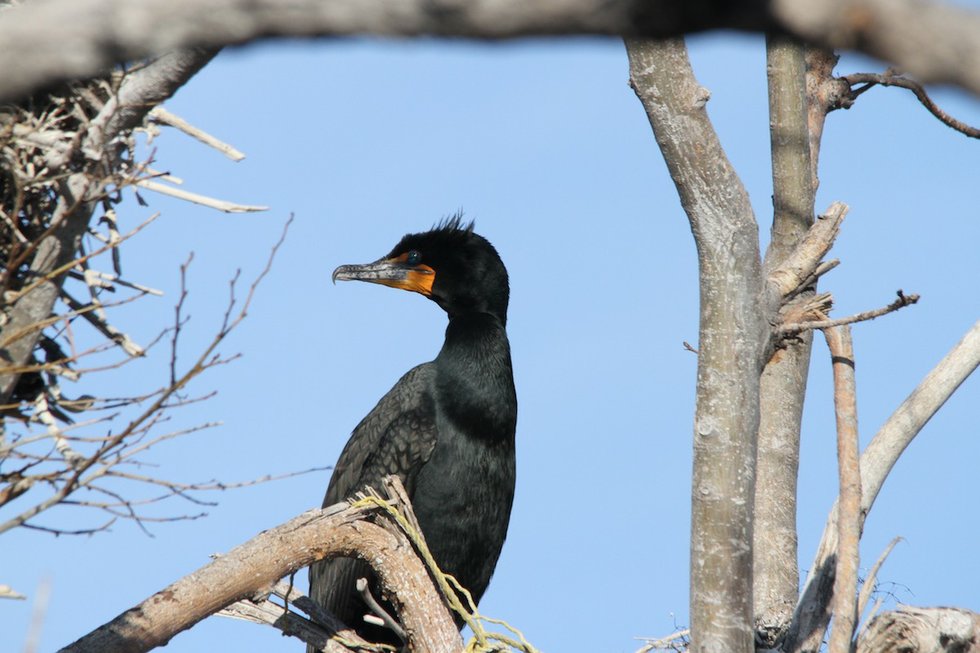 In 1604, Samuel de Champlain visited an island off Nova Scotia he nicknamed the Isle of Cormorants for “the infinite number of these birds of whose eggs we took a barrel full.”

Records of massacres of cormorants dispatched by the “boatload” in Ohio and in Lake of the Woods, Ontario, date back to the late 1700s. Other accounts of migratory cormorants during that time describe flocks “four miles long and one-and-a-half miles wide,” large enough “that at times it was impossible to see the sunset sky through the mass.”

No flocks anywhere near that size have been reported in recent history.

The introduction of the incredibly toxic pesticide DDT into the Great Lakes environment after the Second World War had a terrible effect on populations. The pesticide bio-accumulated up the food chain, which resulted in egg-thinning in fish–eating bird species. By 1970, cormorants disappeared completely from Lake Michigan and Lake Superior, and only 10 nesting pairs remained in Lake Ontario.

By then the birds had developed a reputation for, among other things, peeling the bark off trees to make their nests, and their acidic poop, which kills vegetation.

“There is that old superstition the dark is evil and it goes in hand with black animals like black cats,” says wildlife conservation filmographer Julian Victor, whose work on Toronto’s growing raccoon population has been featured on National Geographic Television. Victor is the creator of the short documentary Wild Toronto: Canopy Of Cormorants. Available on YouTube, it captures the comings and goings of the 15,000 nesting pairs of double-crested cormorants who make the largest colony in the world at Tommy Thompson Park on the Leslie Street Spit during the spring and summer months.

“People need to get out of the hatred and fear and learn basic biology of the animals,” Victor says.

In Milton’s Paradise Lost, Satan takes the disguise of a cormorant to enter the Garden of Eden and tempt Adam and Eve.

“Thence up he flew, and on the tree of life… sat like a cormorant… devising death to them who lived,” wrote Milton.

At a time when the environmental and scientific community warn us that we are in the midst of the world’s sixth mass extinction, the rebounding of the cormorant should be celebrated as an indicator of the resiliency of nature and hope for a future.