Coalition calls for 100 kilometres of bike lanes, including “spines” along Bloor and Yonge

In a letter to the mayor, the group argues that an expanded bike network can serve as the city's "default" transit system given the social distancing required by COVID-19 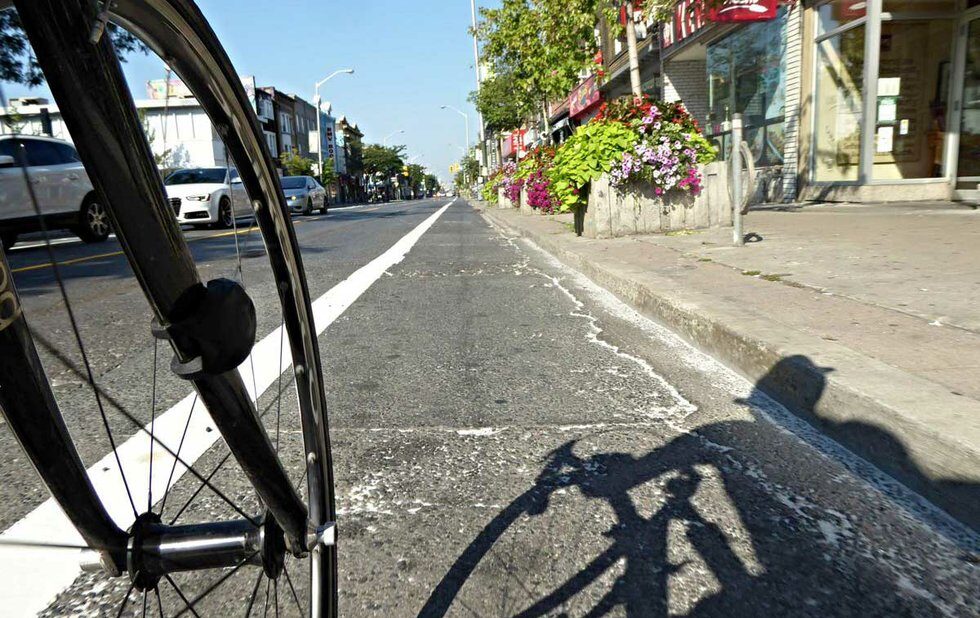 Bloor bike lane pilot project was repackaged into a bite-sized proposal that even bicycle-fearing council could accept.

A coalition of 45 community groups is calling for the installation of 100 kilometres of bike lanes in Toronto – including the “immediate” installation of “spine” bikeways along Bloor-Danforth from Etobicoke to Scarborough and Yonge Street from Steeles to the waterfront.

In a letter to Mayor John Tory and members of council to be released this morning, the groups are also calling for bikeways on the busiest bus routes (including Jane, Weston, Dufferin, Bayview, Victoria Park, Don Mills/Overlea and Finch) and the implementation of lower speed limits on those roadways “to protect vulnerable and novice riders.”

They say the bikeways can serve as the “default for the city’s transit system given the social distancing imperative of COVID-19.” And that ongoing LRT construction on Eglinton, another busy bus route, can be solved for the time-being by considering parallel arterial roads as alternatives.

The letter notes that “Many cities around the world have already provided alternatives to transit by installing temporary bikeways, ranging from dozens to hundreds of kilometres, to allow essential workers to reach workplaces, and other residents to obtain daily necessities. We urge Toronto to do the same.”

The city announced its ActiveTO plan earlier this week to fast-track bike lane expansion in the city and provide more public space for pedestrians. The plan includes designating “quiet streets,” closing major thoroughfares to traffic and identifying “hotspots” on sidewalks where curbside widening can be accommodated.

The coalition argues that installing bikeway “spines” along Bloor and Yonge “is a vital starting point” for the city’s ActiveTO plans “to provide an alternative to subway lines,” as well as connections to existing north-south bike lanes and bike trails alone the Humber and Don River systems.

“In addition, the city’s existing bike infrastructure can be quickly augmented by extending heavily used bike lanes, including, for example, a westerly extension of the College bike lane and extensions in both directions along Queen for the Richmond-Adelaide bike lanes,” the letter states.

The groups say the proposed routes will encourage new riders and will require the city and council to offer instruction in safe riding, as well as bike repair services and bike parking facilities.

“Properly designed bikeways will also provide an option for residents who rely on mobility devices, such as power-assisted wheelchairs, electric-assist bicycles, and cargo bikes,” the letter says.