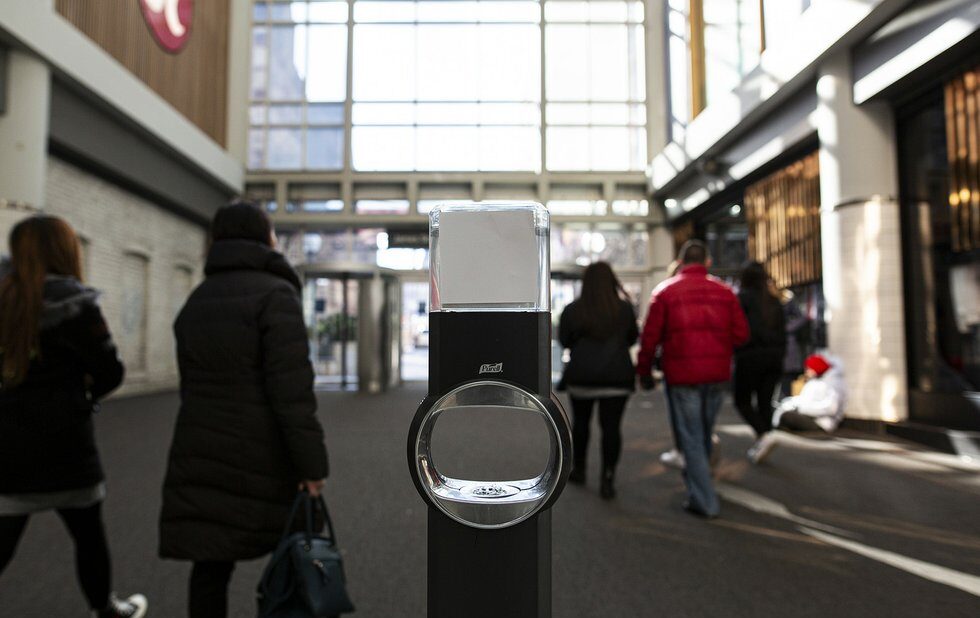 Shoppers Drug Mart will start dedicating the first opening hour at all stores to customers who need assistance or consideration, including seniors and people living with disabilities.

“We encourage you to check with your local store to confirm operating hours,” the company said in a statement.

The store will also offer its 20 per cent Seniors Day discount on regular-priced items during the first hour of each day. (In addition to Seniors Days on Thursdays.)

George Brown College has announced it will close all its facilities “until further notice.”

The College says the student residence will remain open and that teachers will continue to work remotely “to develop alternate delivery options (including online) for courses and services, so that we will be prepared to deliver courses remotely on March 23.”

The college says there are no known cases of COVID-19 at George Brown but that it “has taken this unprecedented step to safeguard its community and help slow the spread of the COVID-19 virus.”

The province’s Chief Medical Officer of Health, Dr. David Williams, who strongly recommended a further limitation on public gatherings of over 50 people earlier today, offered a further rationale for the decision in a statement tonight.

Williams had previously recommended no gatherings of 250 people or more on March 12. He says the new limit was prompted “Following a number of significant announcements regarding travel and public health measures over the past 72 hours, and after further consultations with my colleagues across Canada.”

The statement goes on to say that “This is an evolving situation. It is imperative that we take steps now and take steps together to reduce opportunities for transmission.”

Williams’s statement signals that the new limit will be in effect for the “coming weeks.”

The country’s largest cinema chain Cineplex is temporarily closing its 165 theatres across the country and its Rec Room and Playdium entertainment venues, effective March 16. The cinemas will remain closed through April 2. The company will reassess whether to reopen at that time. All cancelled bookings will be refunded.

Earlier in the day, provincial and Toronto public health officials said there has been “growing evidence of community spread” of COVID-19 and strongly recommended that restaurants, bars, private schools, daycares and movie theatres close by midnight. Ontario’s chief medical officer of health, David Williams, has also said to avoid gatherings of more than 50 people.

Theatre company Soulpepper is suspending all performances until May 6.

The suspension impacts Simon Stephens’s adaptation of Chekhov’s The Seagull (March 26-April 26) and the play-reading event Fresh Ink (March 20). Ticket holders for both events have been contacted.

“Thankfully, we had no shows on stage last week, and we were able to use that time to assess the impact of these decisions and make appropriate plans as they pertain to our year-round season of programming,” the company said in a statement. “We are assessing ways we can support the artists, technicians and front-of-house teams that will be impacted by these closures.”

Additionally, the Young Centre for the Performing Arts is closed to the public until further notice. Staff have been asked to work from home until April 5. Read our list of closures and cancelled events here.

Activist group Black Lives Matter-Toronto has started an emergency support fund for Black people in the GTA who need extra financial support during the COVID-19 pandemic.

“We will be giving out one time stipends of $125 or $250 to Black people through an online application process, depending on need (please self-assess),” the group said in a statement posted on the fund’s GoFundMe page. “As we need this fund to reach as many people as possible please only apply once there will be one-time access only. We will continue to fundraise so we are able to give out as many as possible.”

The historic venue was finally set to reopen on April 1, but will remain closed during the pandemic. Read more here.

Toronto’s medical officer of health Eileen de Villa strongly recommended that all bars and restaurants stop dine-in services by no later than midnight tonight, as well as the closure of all night clubs, movie theatres and concert venues as soon as possible.

“Businesses who chose to defy these recommendations may be subject to orders under the Health Protection and Promotion Act,” de Villa said during an afternoon press conference on Monday.

Businesses that remain open could potentially be found guilty and fined up to $25,000 per day of under the provincial act. De Villa is encouraging restaurants to switch to take-out and delivery.

“We know that increasing social distancing is a key component to preventing the kind of circumstances we’re seeing in other jurisdictions that applied those measures too late in their outbreak,” de Villa added. “I encourage the compliance of [local businesses] in order to limit the impact.”

In Toronto, de Villa confirmed that four people are hospitalized due to COVID-19 and the city is monitoring a total of 76 positive cases.

4:15 pm Ontario recommends no gatherings of over 50 people

David Williams, the province’s chief medical officer, recommends that gatherings of more than 50 people be cancelled. At a press conference on Monday, Williams also said that churches, private schools, daycares, bars and restaurants – except those that do takeout or delivery – should close.

Prime Minister Justin Trudeau has announced that Canada will be closing its borders to non-Canadian citizens and permanent residents except U.S. citizens. Other exceptions to the rule include air crews, diplomats and immediate family members of Canadian citizens. Airlines will also be given the power to ban travelers presenting COVID-19 symptoms from boarding a flight destined for Canada. Starting Wednesday, March 18, only airports in Toronto, Montreal, Vancouver and Calgary will be allowed to receive international visitors.

When asked why U.S. citizens were exempt from the ban, Trudeau said, “We are very closely coordinating our efforts with the U.S. In recent days, I have spoken with Trump and we recognize the integration of our two countries and that that demands a particular level of coordination over the next steps.”

Trudeau emphasized that Canadians should avoid non-essential travel and for those who have just returned to self-isolate for 14 days. “If you are aboard, it’s time to come home. And all Canadians, as much as possible, should stay home,” Trudeau said.

The College Street rep cinema is the latest movie house to shut down in a bid to curb the spread of COVID-19. Operators had initially decided to stay open, but have now cancelled or postponed events scheduled between March 16-April 1. Ticket holders have been contacted.

1:38 pm Trudeau to update country on federal response to COVID-19

In an effort to quell panic-buying and stockpiling, the city is allowing retail businesses to receive deliveries 24 hours a day, seven days a week – exemption from noise bylaws – to ensure essential goods remain in stock.

“While being prepared for emergencies is always advised, any bulk purchasing beyond a two-week supply jeopardizes the ability of vulnerable people to access essential food and health supplies,” a statement from the city reads.

The 38th edition of the festival was originally going to take place from May 19-23, but will now be moved to the fall due to the ongoing COVID-19 pandemic. Read more here.

11:45 am Ford moves to protect workers

During a morning press conference, Premier Doug Ford and Monte McNaughton, the Minister of Labour, Training and Skills Development, announced the provincial government will introduce legislation to protect employees in isolation or quarantine due to COVID-19, as well as those who need to care for children because of school or day care closures. If passed, the legislation would offer job protection for:

These measures would be retroactive to January 25, 2020 – the date of the first presumptive COVID-19 case confirmed in Ontario. McNaughton said the measures would be in effect until “the disease is defeated.” The proposed legislation would also remove the requirement for employees to provide sick notes, a step back from the conservative government’s 2018 legislation which reinstated the right for employers to demand doctor’s notes.

When asked if the province will mandate the shutdown of restaurants, bars and other non-essential businesses, Ford said “everything is on the table” but did not give a direct answer.

Finance minister Rod Phillips added the 2020 Ontario budget, which was to be released on March 25, will be postponed. Instead the government will release an economic and fiscal update that will include increased resource for the health care system. Those details have not yet been released.

After initially staying open with enhanced cleaning protocols in place, movie theatre chain Imagine – which operates the Carlton – is closing down “when it is safe to do so.”

Provincial public health authorities have confirmed 32 new cases of COVID-19. Ontario’s total number of cases is now 177, with five cases listed as no longer infectious. There are currently 1,537 cases under investigation and 8,464 have tested negative. Officials say the risk to Canadians remains low.